Aryabhata I and How He Influenced Math

Aryabhata I was born in Kerala, India, but moved to Kusumapura early in life. His contribution to mathematics and science is vast, from approximating Pi better than anyone in his time period to deducing the Earth is round. He had many scientific and mathematic discoveries, which he wrote about in his book, the Aryabhatiya. He declared that the Earth rotates on its own axis and used logic to determine that this is what created night and day. (Jain)

Part of Aryabhata’s fame was brought by his debunking myths of both religious and general varieties.

Don't use plagiarized sources. Get your custom essay on
“ Aryabhata I and How He Influenced Math ”
Get custom paper
NEW! smart matching with writer

Instead of the previously believed “fact” distributed by the Hindu priests that it was a demon’s head named Rahu swallowing the sun and moon, Aryabhata proved them wrong by driving the theory that eclipses happen because of the shadow given off by the earth and moon in place of the Hindu myth. Another myth he disproved by declaration was the thought that the moon gave off its own light, giving it the glow that dominated the night sky.

In 499 A.D., at age 23, he wrote Aryabhatiya, which would be known as his famous astronomical opus. As a result of his paper, the Gupta dynasty ruler, Buddhagupta, gave him the title of Head of the Nalanda University to recognize his intellect (Kumar). Later, it is believed that he wrote another book, called the Aryabhata-siddhanta, but it is now lost (Jain). The book is split into three parts: the Ganita, which translates to Mathematics; the Kala-Kriya, which contains Time Calculations; and the Gola, which is mainly sphere mathematics.

The Ganita is astonishing because of its lack of proof concerning the 66 rules it provides (“Aryabhata I”).

Aryabhata’s mind is also the basis of algebra, geometry, and trigonometry. He created the equation for finding the circumference of a circle using the radius instead of the diameter, like the Greeks used. For this equation, C = 2πr2, he had to have a close value for π, which he successfully approximated somehow, and shared his discovery in Aryabhatiya: “’Add four to one hundred, multiply by eight and then add sixty-two thousand. The result is approximately the circumference of a circle of diameter twenty thousand. By this rule the relation of the circumference to diameter is given.’ In other words, n = 62382/20000 = 3.1416, correct to four rounded-off decimal places” (Jacobs). The advancements on finding the numerical value of π have dramatically increased since then, having calculated numbers on the upside of 5 trillion. His contributions to the mathematical world are still vast, and his discoveries are the foundation for modern algebra and through that, most of math overall.

Aryabhata also impacted Trigonometry by his definitions of sine (jya), cosine (kojya), versine (utkrama-jya), and inverse sine (otkram jya). “He was the first to specify sine and versine (1-cos x) tables, in 3.75° intervals from 0° to 90°, to an accuracy of 4 decimal places” (Kumar). The modern names “sine” and “cosine” are also believed to be mistranslations of the words introduced by Aryabhata, Jya and Kojya.

In the field of Algebra, he provided results for the summation of series of squares:

He did not disappoint the series of cubes:

As for remembering the great Aryabhata, he has many colleges named after him, such as the Aryabhata Knowledge University in Bihar and the Aryabhata Research Institute of Observational Sciences (ARIOS) near Nainital, India.
India’s first satellite also shared his name. (Kumar)

Aryabhata I and How He Influenced Math. (2016, Mar 11). Retrieved from https://studymoose.com/aryabhata-i-and-how-he-influenced-math-essay 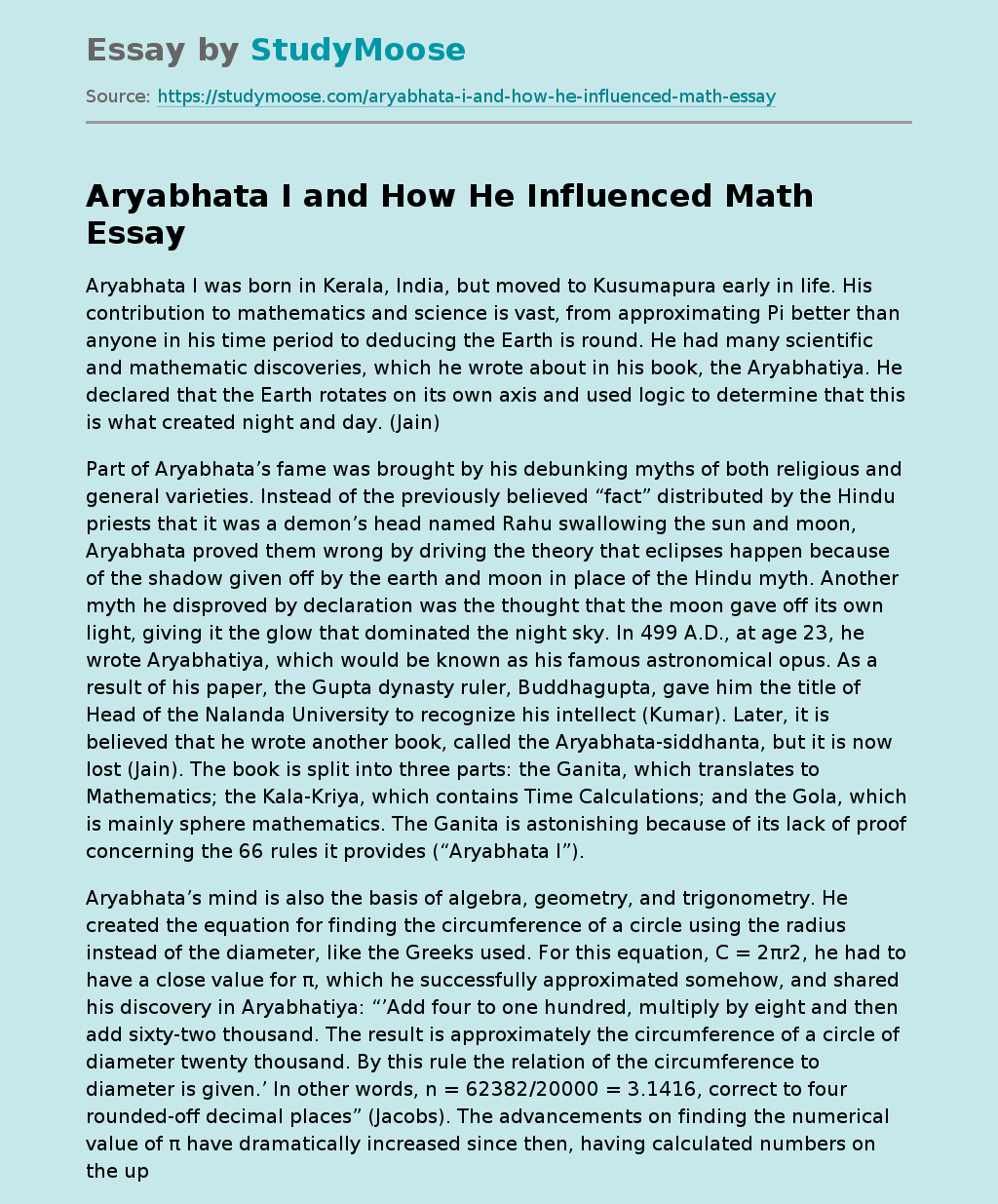