The movie A Knight's Tale

In the movie A Knights Tale the main character William Thatcher has dreamed of being a Knight ever sense he was a boy. The one overlying problem this tale is that “A man can’t change his stars”, other wise saying that William was not born of noble birth. This story takes place in the middle ages where to compete in jousting tournaments you had to be born of noble birth. William overcomes this with his hard work, his loyalty and perseverance.

Don't use plagiarized sources. Get your custom essay on
“ The movie A Knight’s Tale ”
Get custom paper
NEW! smart matching with writer

In the beginning of the movie, William is only a squire to a Knight. He helps tend to Sir Olrick Vonlictensteins needs and wants.

But soon he dies and with no other way to get money decides that he should step up and joust for him under his name. William ends up winning his joust and gets the gold needed for him and the other squires. After the first win he convinces his squires that they could keep doing this at other tournaments to make money for themselves.

This shows his hard working ethic because even though what they are doing is quite trying, he still manages to pull through and become sucsessful. After they have won they’ve first tournament William had damaged his armor in the joust. As they make it to the next joust they don’t have enough money to fix his armor so he has to joust with his damaged armor on.

Even though his arms are almost immoveable because of the damage he still takes the risk to joust so that he can win more gold for them to get new armor made.

This shows his willingness to work harder to make the money he needs to fix his armor. Near the end of the movie in his last joust he is against his enemy, Count Adimar. Count Adimar was using pointed lances and ends up wounding William by showing a pointed lance deep in his shoulder. But through his hard work he choose to take all of his armor off and joust, putting himself at great risk. But in the end he ends up knocking Count Adimar off of his horse and winning the joust. William showed his perserveence when he was following his dream of becoming a knight.

When his Knight died at the beginning of the movie he ricked everything when he stepped in as a knight. If he were to get caught he would have suffered great consequences. By doing this I believe he showed his perseverance to purse his dreams. William shows his perseverance when, even after he is injured while jousting he chooses to take off all of his armor to joust even though it is a great risk to himself. This shows that William is persevering because he takes the risk of injuring or killing himself to defeat Count Adimar and achieve his dream.

He is also persevering when, as a young boy his father sent him away to be a squire. Even sense William was a boy he was working towards becoming a knight by getting as close to the lifestyle as he could. Throughout the movie William shows a lot of loyalty to him men. This helped him to achieve his dream very much so. When Jeff, his announcer and the man who helped him forge documents to make him appear to be of noble birth, gambles and looses, William had to pay to get him free.

If it were not for William and his loyalty to him men he would have been stripped of his clothes, beaten and been paraded around the village, but William pays his debt for him to get him free. He also showed his loyalty when his girlfriend tells him that in order for him to prove his love for her she must loose the joust. So he takes a brutal beating for her by deliberately loosing and hurting himself in the process. But then after she has seen enough, she tells him that if he really did love her than he would win all of his tournaments.

So even after he had fallen so far behind for her in the tournament he strives to win for her and ends up doing so. This proves his loyalty to her because he is willing to even endanger himself for her. His loyalty is also shown when the Prince of Wales is jousting and everyone else is withdrawing because he is of royal blood and is technically not allowed to joust in tournaments, but William still jousts him because he realizes they are both in the same boat. They both want to be jousting, but they are both now allowed to do so according to their birthrights.

In the end of the movie, after everyone finds out about William, knowing that he isn’t born of noble birth he is cast out and let out to be stoned. The Prince of Wales Knights him because of his loyalty. He says, “even if I were not to have known you well, I could tell you were a good men because of how loyal your friends are to you. But I would know better now wouldn’t I? Because even when you knew who I was you still jousted with me and that is knightly too”. In the end William ends up changing his stars and becomes the knight he has always wanted to be.

The movie A Knight's Tale. (2016, Sep 17). Retrieved from http://studymoose.com/the-movie-a-knights-tale-essay 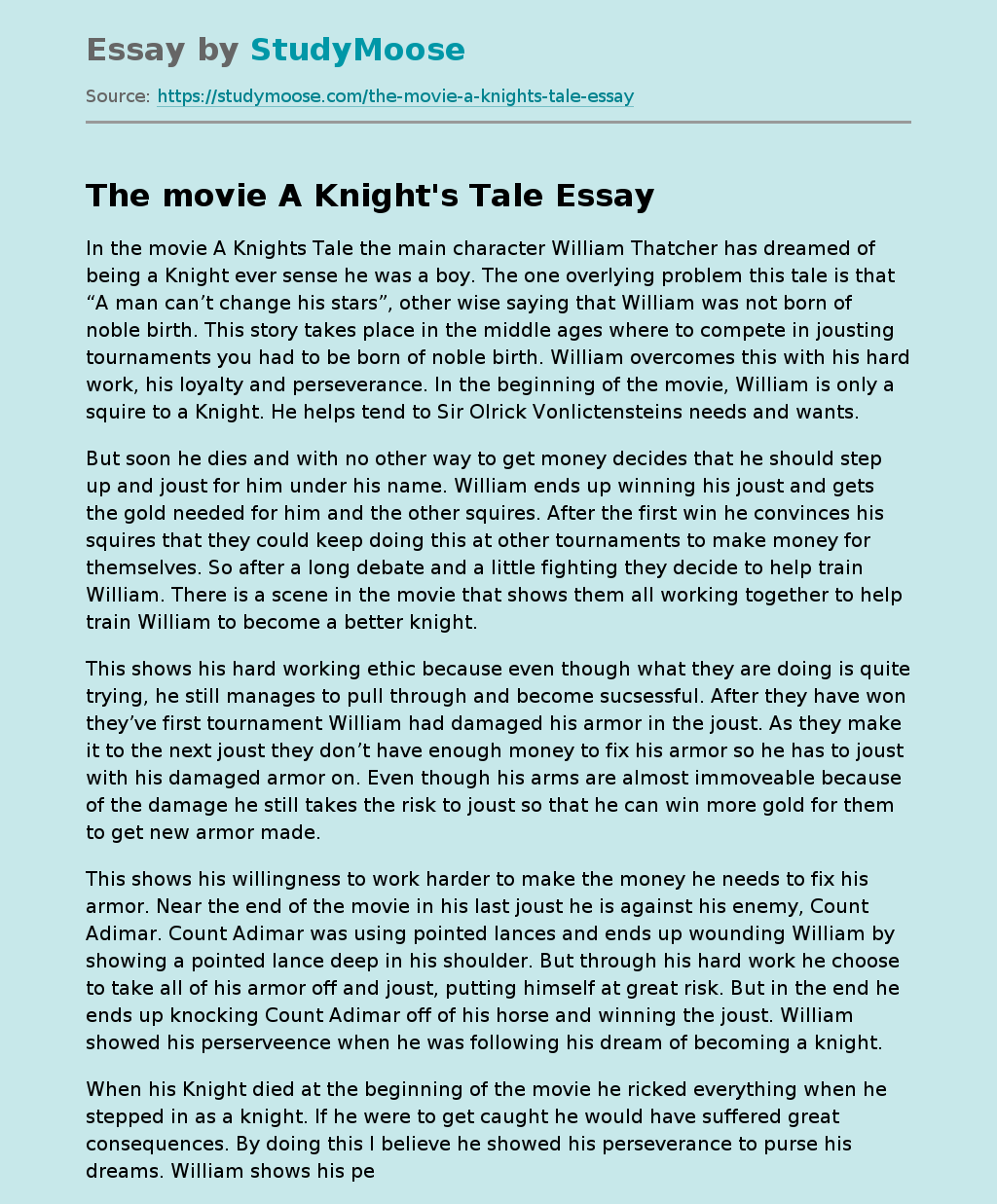