Piaget’s theory of intellectual development states that children go through four stages as they grow and develop. These stages are the sensorimotor stage, the preoperational stage, the concrete operational stage, and the formal operations stage. In the sensorimotor stage, young children use their senses to explore their world. They look, touch, see, smell, and listen to the things in their surroundings and at the same time, they develop what Piaget refers to as object permanence which means that the child is able to retain an image of what he or she experiences such as round objects and pain.

Don't use plagiarized sources. Get your custom essay on
“ How Piaget’s Work Influenced Instruction and Curriculum Development? ”
Get custom paper
NEW! smart matching with writer

Toothman cites Piaget as saying that this stage is composed of substages which are the schemata stage, assimilation stage, and accommodation stage. ( Toothman, n. d. , n. p. ) In the schemata stage, the child develops a mental structure of the things he or she sees around him or her and tries to see which objects bet fit the mental structure. The child then proceeds to the assimilation stage where a child incorporates new information in the existing schema.

For example between one ball and another ball, the child may notice that the other ball makes noise when shook.

The child then moves to the accommodation stage where he or she makes adjustments in the schema to fit in the object. In the The next stage is the preoperational stage where young children develop a mental representation of the things they experience. For example, they may mentally symbolize animals as having four legs such that anything that fits this mental representation is considered by the child to be an animal.

According to Hermann, ( Hermann, 1964, p. 250) the child is able to perform mental operations such as classifying objects and arranging them in a particular order. In the last stage which is the formal operations stage, young children learn to think in an abstract manner, reason in a hypothetic manner, and think about thinking. Cherry cites Piaget as saying that the role of deductive logic is very important at this stage where the child determines outcomes for given hypothetical situations based on a general principle. (Cherry, n. d. , n. p. ).

Cherry further adds that “children at the formal operational stage of cognitive development are often able to quickly plan an organized approach to solving a problem. ” The work of Jean Piaget has greatly influenced the way schools design their curriculum or program of instruction as well as the way children are taught. Their curriculum of instruction are based on Jean Piaget’s four stages of intellectual development. Teachers as well as school administrators have put great emphasis on manipulatives, language experience, hands-on activities, and discovery oriented instruction.

Young children who are in the sensorimotor stage are given plenty of experiences to use their hands and eyes to understand the things around them. For example, in math, young children in this stage are taught how to count using small blocks or understand the different shapes by using toys which teach them how to fit an object into its correct slot or space. In teaching science, teachers do not allow their pupils or students to be mere observers; they are encouraged to touch, feel, smell, hear, and taste.

For example, in a lesson about the leaf, young children are not only shown what a leaf is but they are able to experience the leaf by touching or smelling. It is in this manner that children are able to develop a concrete idea of what leaf is. When children reach the preoperational stage, the curriculum and method of instruction changes. Here the teacher helps the young children develop mental images of the things around them by using pictures and words. For instance, the teacher may show the young children a picture of a living organism with four legs and tell them it’s an animal using the word animal.

It is here that children are also able to associate words with pictures of objects. In math, teachers do not only teach their pupils how to identify one shape from the other but also associate a word with its respective shape. For instance, the math teacher may show his or her pupils a square and at the same time, say the word square. Adjustments are made in the curriculum and method of instruction as children reach the concrete operational stage. The curriculum and the teacher focuses more on nurturing the abilities of young children to perform mental operations using objects.

In the language class, for instance, young children are taught how to arrange the letters of the alphabet in the correct order using blocks. In math, children learn the correct sequence of numbers by having them arrange each flash card containing a number in the correct order. It is also in this stage that children are taught how to solve simple problems using their power of reasoning. The teacher may hold one big ball and one small ball and ask the pupils which ball is big and which is small. In their young minds, the pupils try to see the discrepancy between the sizes of the two balls.

In language, young children are able to discover the appropriate initial sound for each letter in the English language. As children enter the formal operations stage, the teacher is already aware that the child is already ready for work that involves abstract thinking. In math for example, children are taught how to solve numeric problems in a step-by-step manner. In science, young children come up with possible answers to problems that might be posed by the teacher and systematically prove their answers through experiments. 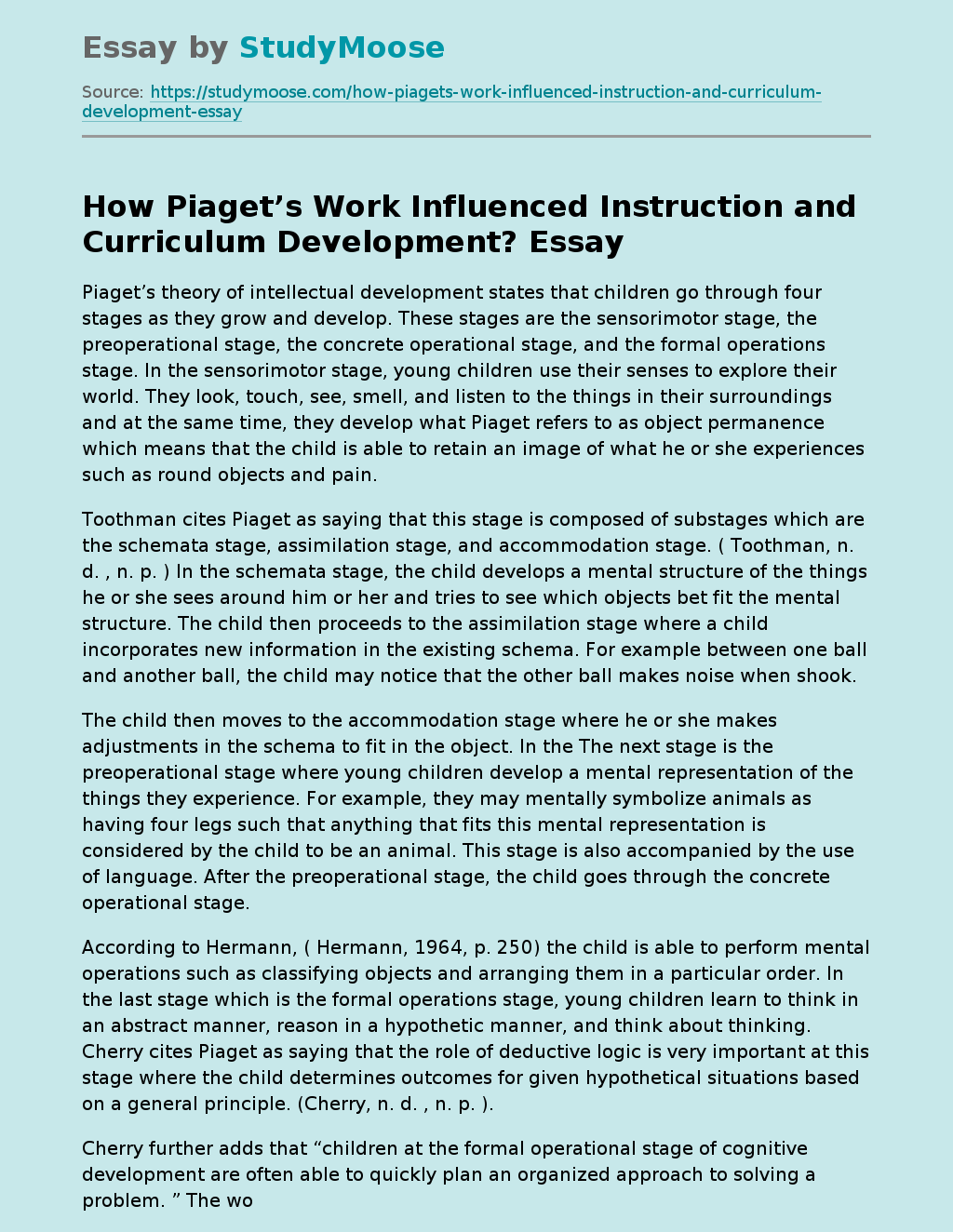