Many years after the abolishment of slavery in the United States of America, African Americans were still fighting for equality in countless aspects of life. May 17, 1954, Brown vs Board of Education of Topeka, Kansas was one of the most important cases about racial segregation that won in the Supreme Court and set the stage for many other civil rights cases. A black man by the name of Oliver Brown, father of Linda Brown, claimed that schools were not equal for black and white children and that segregation violated the “equal protection clause” of the 14th Amendment of the Constitution of the United States, which says that no state can “deny to any person within its jurisdiction the equal protection of the laws” (History.

Don't use plagiarized sources. Get your custom essay on
“ History – Brown v. Board of Education Re-enactment ”
Get custom paper
NEW! smart matching with writer

com). According to Linda Brown, her father, Mr. Oliver Brown, believed it was unjust for his young children to walk so far to catch a bus for school when there was another school within a few blocks of his home (RobertHJacksonCenter.

Proficient in: Brown Vs Board Of Education

This Court case was a landmark case that paved the way for the civil rights movements and the civil rights act to end racial discrimination in the mid-twentieth century. A seven-year-old black child by the name of Linda Brown had to walk seven blocks, sometimes in the bitter cold, crossing dangerous railroad yards and a very busy avenue to catch a school bus that would drive her two more miles just to get to the all-black school. Some days she would get halfway and run back home with tears in her eyes because the walk was to much for a little child to bear.

Young Linda stated that she could not understand why she was not able to go to the same school as her neighborhood playmates who had a different color skin than her. Linda’s father tried to enroll her in the all-white school which was just a few blocks away from their home only to get turned down (RobertHJacksonCenter.). Oliver Brown had enlisted the help from lawyers of the NAACP (National Association for Advancement of Colored People) and on February 28, 1951 a suit was filed in Federal Court where a three-judge panel ruled against the Browns and in favor for the Board of Education (“Brown Case – Brown v. Board.”).

The Courts claimed that the all-black and all-white schools had similar transportation, teachers, buildings and class work and stated, “no willful, intentional or substantial discrimination” (“Documents Related to Brown v. Board of Education.” National Archives). Prior to the Brown case there were eleven other cases in Kansas that claimed the schools were not equal at all, they claimed schools had out-of-date textbooks, subpar building and, at times, no school supplies. In Topeka, there were only four elementary schools for black children but there were eighteen for white children, in addition some programs were not offered to the black schools. Kansas law did not require segregation in public schools except at the elementary level, Mckinly Burnett, Chapter president of the NAACP in Topeka, tried for two years to get the public-school board to simply integrate elementary schools with no avail (“Brown Case – Brown v. Board.”).

NAACP along with Oliver Brown and four other cases in different states including, South Carolina, Virginia, The District of Columbia and Delaware all decided to take their cases to the Supreme Court for justice. All five cases were different in their own way but they all involved black children in elementary schools and the lower Courts had ruled against each of the cases, but the most important thing about these cases is that they all claimed the “separate but equal” ruling was a violation to the equal protection clause of the 14th Amendment to the United States Constitution (“Documents Related to Brown v. Board of Education.” National Archives). Thurgood Marshal and the NAACP legal defense team brought all five cases together as one and argued to the Supreme Court that these schools were not equal. Not only were the textbooks, transportation, buildings and amount of space unequal, but the NAACP also had sociological tests performed by social scientist Kenneth Clark. His data suggested that segregation in the school system was psychologically damaging and made black children feel inferior to white children and that this should not be legal in any school (“History – Brown v. Board of Education Re-Enactment.” United States Courts).

On the other side, the lawyers for the school board based their defense mostly on examples like Plessy vs. Ferguson ruling, saying the children are equal, just in separate schools (“Documents Related to Brown v. Board of Education.” National Archives). In the early 1890’s, a black man by the name of Homer Plessy attempted to ride in the white-only railroad car and when he was asked to move and refused, he was arrested for violating Louisiana’s 1890 segregation law. He later appealed his case to the Supreme Court (Bell, Silent Covenants. Pg.12). Plessy claimed that the law separating whites and blacks in railroad cars was a violation of the 14th amendment and the “equal protection clause” but the Supreme Court did not see it that way, they voted against Plessy 8-1. Justice John Marshal Haran, who voted in favor of Plessy, wrote, “Our Constitution is color-blind, and neither knows nor tolerates classes among citizens”. Little did he know that his statement would be used by later generations who would say the segregation was unconstitutional (“History – Brown v. Board of Education Re-Enactment.” United States Courts).

After arguing their cases for over a year the courts were deeply divided on a decision. Most of the justices wanted to overturn the Plessy vs. Ferguson case and make segregation in all public schools unconstitutional but they were not able to come to a decision (“History – Brown v. Board of Education Re-Enactment.” United States Courts). Then in 1953 the Courts agreed to hear all sides of the case again, soon after the Chief Justice Fred Vinson died. Justice Vinson opposed overturning the Plessy case and was in favor of the defense in keeping segregation (History.com). Soon after the death of Chief Justice Vinson President Eisenhower appointed Earl Warren the governor of California as the new Supreme Court chief justice (“Documents Related to Brown v. Board of Education.” National Archives). Over the next year the Courts listened to the cases and Justice Warren worked hard to bring the Courts together after so many years of racial division. After years of fighting in Court, on May 17, 1954, Chief Justice Earl Warren read the unanimous decision that by law, school segregation, was unconstitutional. Justice Warren had described public education as “perhaps the most important function of states and local government” (Bell, Silent Covenants, pg.17), he wanted to point out that all humans have a right to learn with equal opportunities and it was the responsibility of the public to make sure that happens.

Justice Warren also stated that “to separate them from others of similar age and qualifications solely because of their race generates a feeling of inferiority as to their status in the community that may affect their hearts and minds in a way unlikely ever to be undone” (Bell, Silent Covenants, pg. 17). Justice Warren wanted to stop the division in America and help whites to understand that just because someone has a different skin color doesn’t make them less of a citizen. The NAACP and the family’s that had fought so hard for so many years rejoiced and celebrated at the Court’s decision. Arguments on how to impose the ruling were heard by the Courts over the next year and, the NAACP requested that desegregation be ordered by the Courts immediately, but the Courts rejected what they had fought so hard for and stated, “with all deliberate speed” (“Documents Related to Brown v. Board of Education.” National Archives). This statement was vague and unclear and gave the impression that the fight for desegregation had only started.

While others were celebrating at the verdict, Thurgood Marshall was not, “You fools go ahead and have your fun,” he said, “but we ain’t begun to work yet” (Bell, Silent Covenants, pg.14). This statement would prove to be extremely accurate. The Supreme Courts opted to let the states decide how to implement the ruling for each state which was a long and challenging process. Brown vs. Board of Education would prove to be a huge victory for many African Americans but would take many more years to completely desegregate schools. It overturned the Plessy vs. Ferguson case and it was the beginning to the end of discrimination towards blacks in our county. This case would cause a tidal wave of black American citizens to demand equality and give them the courage to stand up for their rights to be treated the same as whites and the Supreme Court gave the validation they deserved. From Rosa Parks getting arrested for sitting at the front of the bus because she was black in 1955 to demonstrations and marches that were led by Martin Luther King Jr. in the 1960s (History.com), the Brown vs. Board of Education started a chain reaction for them all. NAACP still fights for equality and justice for blacks today, but this country has changed dramatically regarding segregation. Whites and blacks do not have to drink out of different water fountains, use separate doors, ride in individual train cars, sit in separate parts of a bus or go to different schools all because of the courage and determination from individuals who valued their rights to freedom and equality. 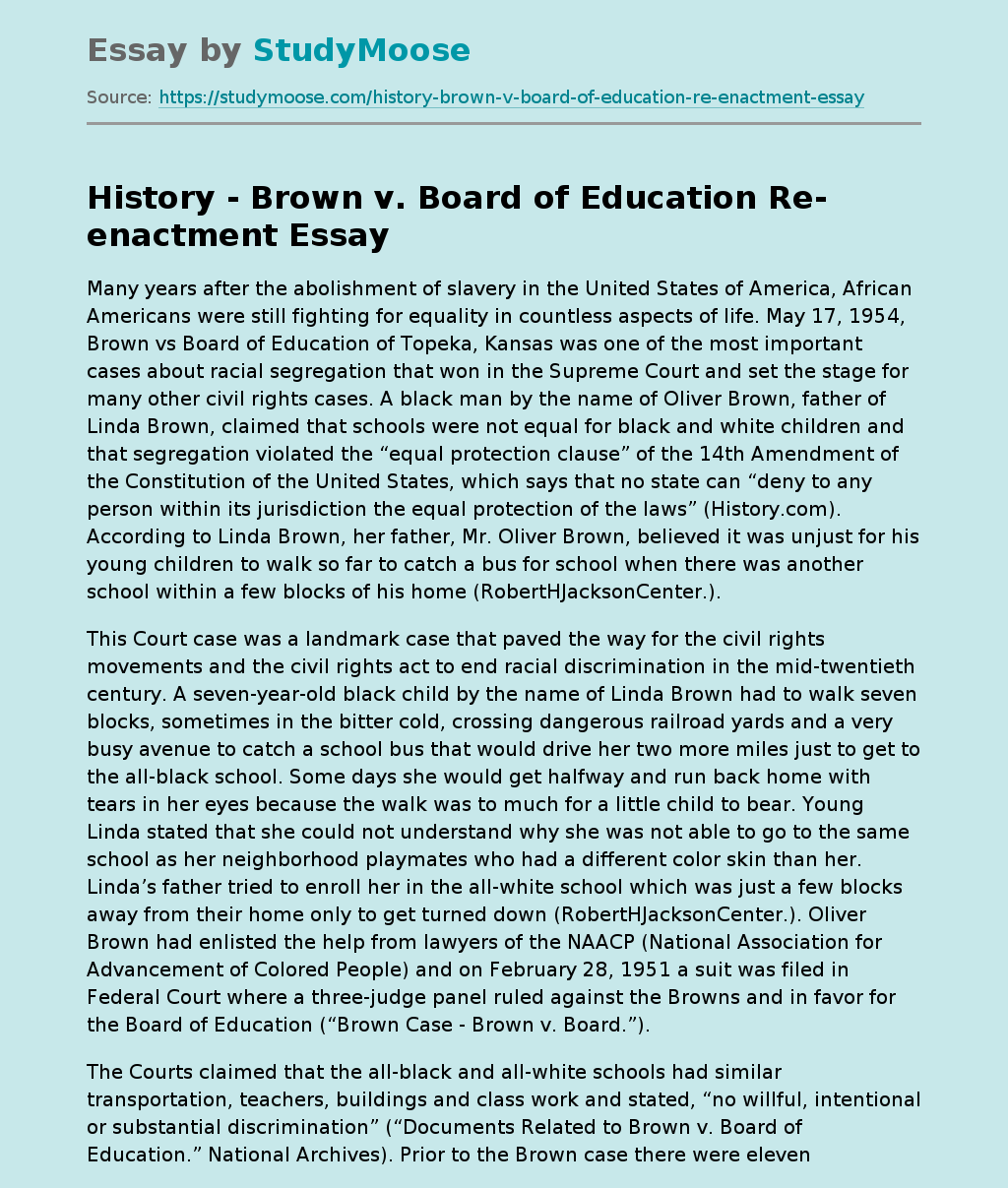