History and Differences of Paleolithic and Neolithic Eras

This paper will discuss the differences between the Paleolithic and the Neolithic eras. The scope of the discussion will center around the “human” experience. The discussion will draw comparisons and contrasts of how humans adapted to their environment and how they worked to improve their day to day lives. The discussion will also reveal how the humans saw their environment through their use of tools and art. This paper will also discuss how and what events precipitated the change from the “hunter-gatherer” of the Paleolithic to the farmer and animal domesticator of the Neolithic period.

Don't use plagiarized sources. Get your custom essay on
“ History and Differences of Paleolithic and Neolithic Eras ”
Get custom paper
NEW! smart matching with writer

Webster’s defines the term “lithic” as “stoney or made of stone” (Merriam-Webster, 2014). So Paleolithic would be the old or early Stone Age. This is a period in the earliest history of Mankind that was identified by the use of stone implements and tools. Whereas the “new” or Neolithic showed a marked evolution of how “man” adapted to his environment. This is seen in the tools they made, the places they lived, how they feed themselves and how they represented their experience in art.

The Paleolithic period is loosely defined as a period of time from 2.6 million to 10000 B.C.E. (Levack, B., Muir, E., Veldman, M., (2014)). During this period early humans were simple hunters and gatherers. They were loosely organized into family bands that followed the food sources. Whether it was heard of deer or a fruit grove, they tended to stay in one place only long enough to exhaust the local provisions.

Then they would pack up and move to where there was more food. It was likely a seasonal and nomadic existence that entailed a daily struggle for survival.

Paleolithic man was a proficient hunter and was able to bring down game animals using spears tipped with chipped stone, flint or other organic material. Flint could be chipped into razor sharp edges that could easily inflict lethal injuries to prey. Tools were not confined to hunting. Cutting, scarping and carving tools were also fashioned from the local resources. Paleolithic man relied heavily on the availability of natural resources. Since they had no permanent settlements and no way to store materials, they were in constant search of food, water, shelter and all manner of resources.

Paleolithic bands were also very social. With the presence of a hyoid bone, Paleolithic man likely had language and they were able to communicate with one another using an early form of “proto-language”. Since hunting and gathering activities were likely daylight activities and Paleolithic humans had quite a bit of down time. This could have offered opportunities to indulge the creative side of their nature. Examples of art in cave drawings and jewelry have been found that really serve no other purpose except for decoration. Some of the artifacts discovered seem to indicate the Paleolithic man also revered nature’s order to the point of resembling religion.

The Neolithic period started about 10,000 B.C.E.and featured some of the beginnings of more modern civilizations. Instead of following herds of game animals, Neolithic man found a way to domesticate them. Instead of foraging for edible vegetation, Neolithic man cultivated plants and began farming their own crops. Wheat, corn and barley were part of Neolithic man’s diet. Now that they have their own livestock and produce, man started to build more permanent housing. The first dwellings were likely wooden structures filled in with mud and used thatch for roofing material. Later they used mud bricks and were able to build larger and more complicated structures.

Tool making also became more sophisticated. Chipped flint and stone were “hafted” onto shafts of wood, whish allowed for more power being directed into a smaller point. This made spears and arrows more effective. Hafting also allowed for axes scrapers, and digging tools to work better. Likely the most remarkable feature of the Neolithic era was the introduction ow writing. While language was in practice during the preceding Paleolithic era, the use of a lasting record allowed for information and knowledge to be passed into posterity. A written standard allowed for trade and other transactions.

The the Paleolithic and Neolithic eras had their differences. The Paleolithic era was massive in terms of years. The earth was warming from the Ice Age and man foraged on the land and migrated with the herds of game animals. The humans learned to fashion tools and hunting weapons from stone, flint and other organic materials. In the Neolithic era, man learned to cultivate plants and keep livestock. This required more permanent housing. While Paleolithic man used language to communicate, Neolithic man expanded that communication into a written language. With all of the differences between the Paleolithic and Neolithic eras, they had one thing in common … man. Mankind from both eras used his intellect to change his environment to make his life better.

History and Differences of Paleolithic and Neolithic Eras. (2016, Apr 30). Retrieved from https://studymoose.com/history-and-differences-of-paleolithic-and-neolithic-eras-essay 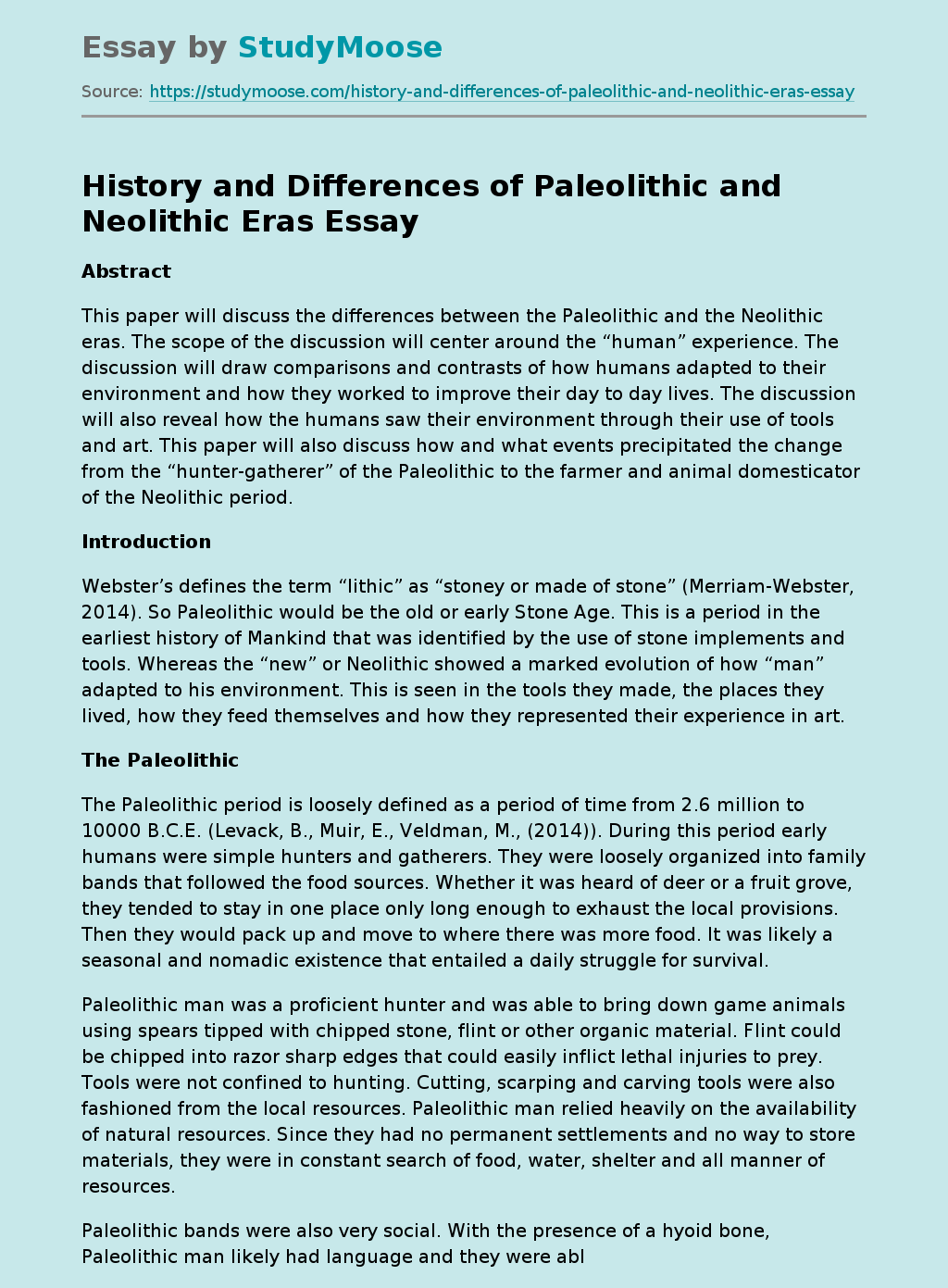