In the late 19th century, battle lines of distaste and resentment were drawn between the new immigrant class and the current American citizens. In New York City, the Nativists and the Irish Catholic community clashed on opposing sides of the line. The majority of Irish Catholic immigrants were uneducated, unskilled, and alien to the industrial city life of the new world. Their mass numbers filled up the city’s slums, poor houses, and prisons. With strong aversion from New York Nativists, the Irish immigrant community was initially obstructed from attaining governmental support.

Don't use plagiarized sources. Get your custom essay on
“ George Washington Plunkitt ”
Get custom paper
NEW! smart matching with writer

This void in representation of such a massive percentage of New York’s population allowed for the emergence and great success of Tammany Hall leaders like George Washington Plunkitt. George Washington Plunkitt, born in 1842, grew up surrounded by this new immigrant Irish-Catholic community. He identified with the city’s immigrant poor and working class; the resented New York Irish were Plunkitt’s community. Although Plunkitt used his political status for his own benefit, his position as a political leader was useful for his community.

Plunkitt’s nepotistic beliefs, while controversial, proved to benefit his community. He had a strong belief in the spoils system and stood for “rewarding the men that won the victory” (12). He could not foresee the existence of a party system that did not place its own workers in offices (13). He candidly discussed the impossibilities of “[keeping] an organization together without patronage” (36). In response to an accusation of Tammany Hall’s patronage, Plunkitt expressed his belief that there is no one more in need, better fit, or more anxious to serve the city than Tammany workers (51).

Although this outlook gave Plunkitt a controversial ‘quid pro quo’ attitude towards government affairs, his community benefitted from this arrangement. This arrangement allowed Plunkitt to provide jobs to his supporters who might have otherwise suffered unemployment. A majority of Plunkitt’s supporters were uneducated and unskilled migrants who were generally feared and disapproved of. Plunkitt meanwhile knew “every big employer in [his] district and in the whole city” and made a point to keep track of the jobs (27).

These connections enabled Plunkitt to provide jobs for the men he considered ‘deservin’ ” (27). To him, a deserving man is any man with a vote for Tammany Hall. Not only did Plunkitt provide jobs to his constituents but he also provided rudimentary support and a form of insurance for the poorer families in his district. If a family in his district was in need, he was able to “fix them up” until they were on their own feet again (27). He proclaimed “no Tammany man goes hungry in my district” (36).

Plunkitt made it unmistakably clear though, that while it was a philanthropy he was offering, it was only in the name of politics. For example, after describing the support he offered to families burdened by the devastation of a fire, he selfishly asked himself how many votes one fire could bring him (37). Although Plunkitt was never without a self-interest motive, he was in a unique position having the ability to be a provider for families in need. At the time, there was no government welfare system established.

Instead, the poor and those in need could rely on the welfare offered by Plunkitt; his community benefitted from his ability to take care of them. Plunkitt’s own benefits from government are obscured and, in some way, vindicated because of the support he provided for his community. Plunkitt made a fortune in politics but in return succeeded in getting big improvements for New York City (28). If Plunkitt had not made his pile in politics, the social net he controlled would have collapsed.

The community would have been worse off if he had not reaped the benefits from government and used his own funds to provide assistance to the poor. Plunkitt was in no way a philanthropist but in becoming a nepotistic and selfish government official who used politics for his own advantage, he became useful to his community. Plunkitt saw a vote in everyone, no matter his or her status. He had the ability to “be several sorts of a man in a single day” (45).

He could “talk grammar” with the wealthy but also connect with the common people of his district (45). He kept is constituents close and would “do them a good turn whenever he [had] a chance” (46). Plunkitt’s adaptable personality and mercantile approach towards politics made him valuable to his community. With his status and fortune, he supported his community and provided government representation for the new Irish immigrant class. He was a provider of jobs and a provider of welfare in return for a vote. 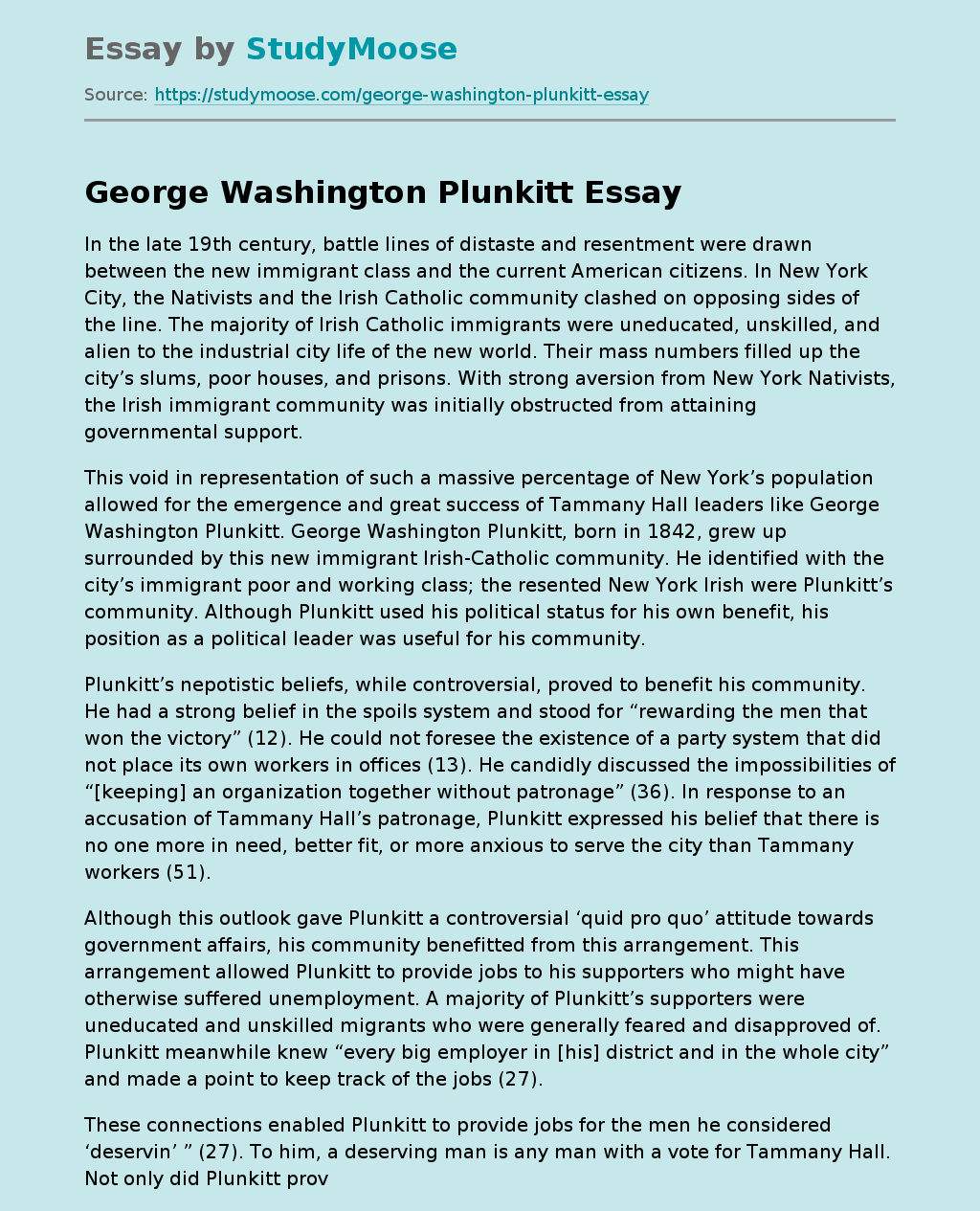