In order to understand George Berkeley’s stance and objections made by the materialists, I will need to clearly define what “materialism” is. Materialism is the view that mind and consciousness are secondary to the material process without which they cannot exist. Material objects are something that exists, but is unperceived, and that there is only one basic kind of substance out of which everything is made out of matter. They are characterized by their PQ, which is independent of anyone’s perception of it and will always exist.

Don't use plagiarized sources. Get your custom essay on
“ George Berkeley ”
Get custom paper
NEW! smart matching with writer

Eg. if a rock falls down from a cliff, and no one is there to perceive it or hear it, will it make a sound once it drops? Material objects are objective and they exist independently of us.

This concept directly contrasts with idealism, where mind and consciousness are first-order realities to which matter is subject and that material interaction is secondary. Berkeley, an “immaterialist,” argued against materialists and thought they were talking nonsense because he claimed that one cannot ask questions regarding the specifics of PQ because when one does, one thinks of its SQ which is dependent on one’s experience.

In his view, it is something that is unthinkable because thoughts consist of perception. This includes the thoughts that when one speaks to someone they form an idea off of what they are saying. Simply, anything that goes on in the mind is a “perception” or an idea. Berkeley affirmed that experience is the key which leads to his partaking of the five sense questions.

Berkeley, as an empiricist, tried to explore the nature of why something exists and believed that all knowledge comes from sensory experience. Eg. we know what a rock is. When we see a rock, we know it is a rock because of its physical structure (despite its color). However, if we have never seen or heard of such a rock before, we wouldn’t be able to recognize it. Therefore, we would fail to name it and inherently fail to classify it. Understandably, our minds won’t be able to grasp the notion that a rock is a rock because it has never experienced it. Materialists challenge this concept and say it exists independently of us.

Calling this material “matter,” we form it according to our perception. For example, the rock exists whether we can name it or identify it. It has a shape, mass, and density, and it takes up space in the world around us (PQ). It must, then, exist whether we perceive it or not. However, Berkeley fundamentally disagrees with the justification of material and claims that the concept exists because someone perceived it and ultimately named it. The materialists then state that the difference between what is real and imaginary is simply looking at whether it has an actual material object. If it does, then it is real, and if it doesn’t, it is in one’s mind.

Berkeley asserts that ideas are distinctive even though languages aren’t. A rock is more or less part of our accepted knowledge everyone has an idea of it. But, describing it through language, might vary based on the person because we use our senses to perceive it. Berkeley then complicates things by splitting the “ideas” into two categories: “strong ones” which depend on senses (more reality) and “faint ones” which are ideas or images (imagination) that are voluntarily created.

The distinction between the two would be that to imagine something, one is constantly active in order to view that something while perceiving something one doesn’t need to actively do anything. Additionally, one can differentiate between the two because an idea is vivid whereas an imagination can be dull. Also, when it comes to laws of nature, imaginations don’t have to follow its route whereas when one perceives something it does. Berkeley deduces that everything is an idea and remains in one’s mind regardless of its category. Additionally, nothing exists beyond perception because if it did we would be able to read people’s minds. 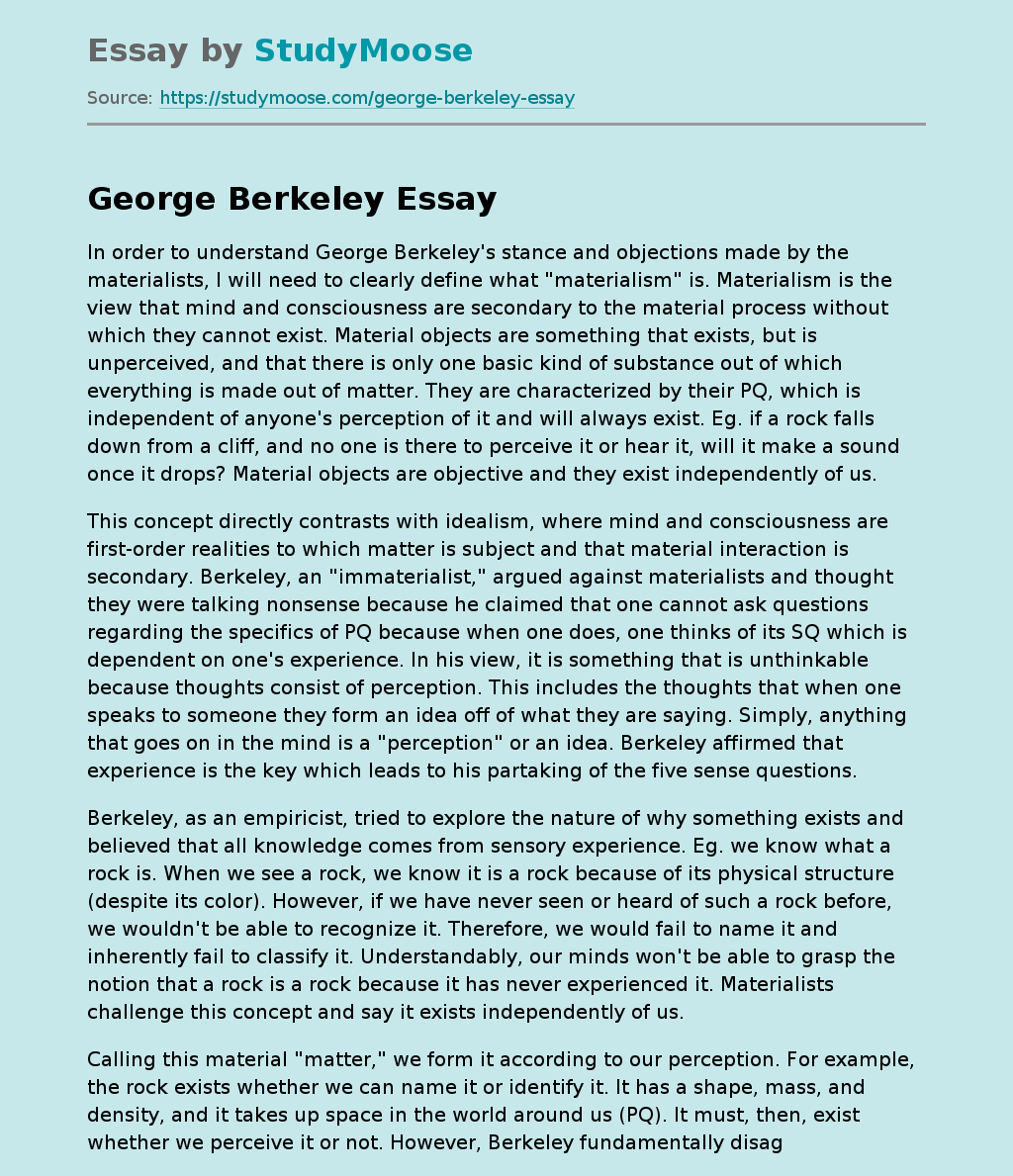