Alison Bechdel’s “Fun Home: A Family Tragicomic” is an exciting autobiography with comics that bring her story to life. Alison Bechdel wrote this book about her childhood, the relationship she had with her father and one of the many things they shared in common, their sexuality. In addition to their common homosexuality, Alison and Bruce Bechdel share o b sessive compulsive tendencies and their artistic ways, even using her artistic language to describe the father daughter relationship they had, “I was Spartan to my father’s Athenian.

Don't use plagiarized sources. Get your custom essay on
“ Fun Home: A Family Tragicomic ”
Get custom paper
NEW! smart matching with writer

Modern to his Victorian.

Butch to his nelly. Utilitarian to his aesthete.” This opposition was a source of tension in their relationship, as both tried to express their dissatisfaction with their given gender roles: “Not only were we inverts, we were inversions of each other. While I was trying to compensate for something unmanly in him, he was attempting to express something feminine through me. It was a war of cross-purposes, and so doomed to perpetual escalation.

At the center of where it all begins at “Fun Home,” Alison helps us envision her desperate need to make a connection with her father, Bruce Allen Bechdel. Father and daughter are playing a game of “airplane” that ends almost as soon as it begins because of her fathers obsession with keeping his old Victorian house he personally restored clean and what he seems to always want kept in perfect condition. Bruce “could spin garbage into gold” and “cultivate the barren yard into a lush flowering landscape.

” “He treated his furniture like children, and his children like furniture.” Alison makes it clear by telling her story and drawings that he was so emotionally distant, that even before his death, she “ached as if he were already gone.”

Before Bruce’s death, he and his daughter have a conversation in which Bruce confesses some of his sexual history; this is presented as a partial resolution to the conflict between father and daughter. Alison along with the rest of her siblings didn’t have the typical dramatic and sad reaction other people would express if there own father passed. Instead she describes it as “Dry-eyed and sheepish, my brothers and I looked for as long as we sensed it was appropriate. If only they made smelling salts to induce grief-stricken swoons, rather than snap you out of them.”

Although Bruce’s death was assumed to be an accident, it was also a tragedy that started a long time before his life had even began which is why many readers, or even Alison suspect suicide because of the evidence Bechdel reveals to the reader. Four moths prior to his death, she came out to her parents that she was in fact a lesbian, she writes, “If I had not felt compelled to share my little sexual secret, perhaps the semi would have passed without incident.” This statement shows a hidden connection between father and daughter before the actual relationship beings.

Her mother also shared the news while Alison was away at college about her husband’s affairs with men and interest in young boys, for example “more promising high school students.” – the muscular, male ones, it seems – to visit his home to borrow copies of great American novels like “The Sun Also Rises” and “The Great Gatsby.” Last but not least, two weeks before his passing, his wife asked for a divorce.

Although these series of events that led up to Bruce’s death may seem very tragic, it allowed Alison to tell not just a story about herself but her fathers struggle to let his secret out as well. One of the most important key points in Alison Bechdel’s memoir is the connection both her and Bruce shared was expressing their sexuality through literature which plays a important role in Alison’s self discovery.

She writes “My realization at 19 that I was a lesbian came about in a manner consistent with my bookish upbringing,” Alison chose to accept the fact and not hide from the issue, taking a female partner and going to “gay union” meetings, she was open about her sexuality before she’d even been in a homosexual relationship. Her father, on the other hand, had had countless affairs with men but wasn’t open about it “. This may be due to him being afraid of coming out, as the images show “the fear in his eyes” when the conversation topic almost ends up being about homosexuality.

Alison Bechdel introduces her readers to many copied by hand family photographs, letters, local maps and excerpts from her own childhood journal, incorporating these images into her narrative. Since the reader is directly responsible for interpreting “action” in a comic, he or she is more directly engaged on a far more personal level.

Fun Home is one such example of a graphic novel making use of comics as a means of opening a discourse about the scars family members leave on their children and finding some form of connections and closure through sharing these stories with others. This novel really shows how comics are moving in new directions and demonstrates a willingness to engage readers in new and challenging ways. Each image seems to give a very specific emotion that is carried throughout her story and the pictures contain elements of beauty, longing, memories, and hope.

The bittersweet relationship of parent and child is held again and again in “Fun Home.” The memoir ends with two images that portray the bad times and the good. The top half of the final page shows the truck about to strike; the bottom half shows daughter, in jumping into a pool, waiting to be caught in her father’s arms. The bonding of the two images is compelling and striking. They also offer reader and author a choice appreciate what was had or continue to yearn. In completing “Fun Home” Alison Bechdel may have finally ended her longing. 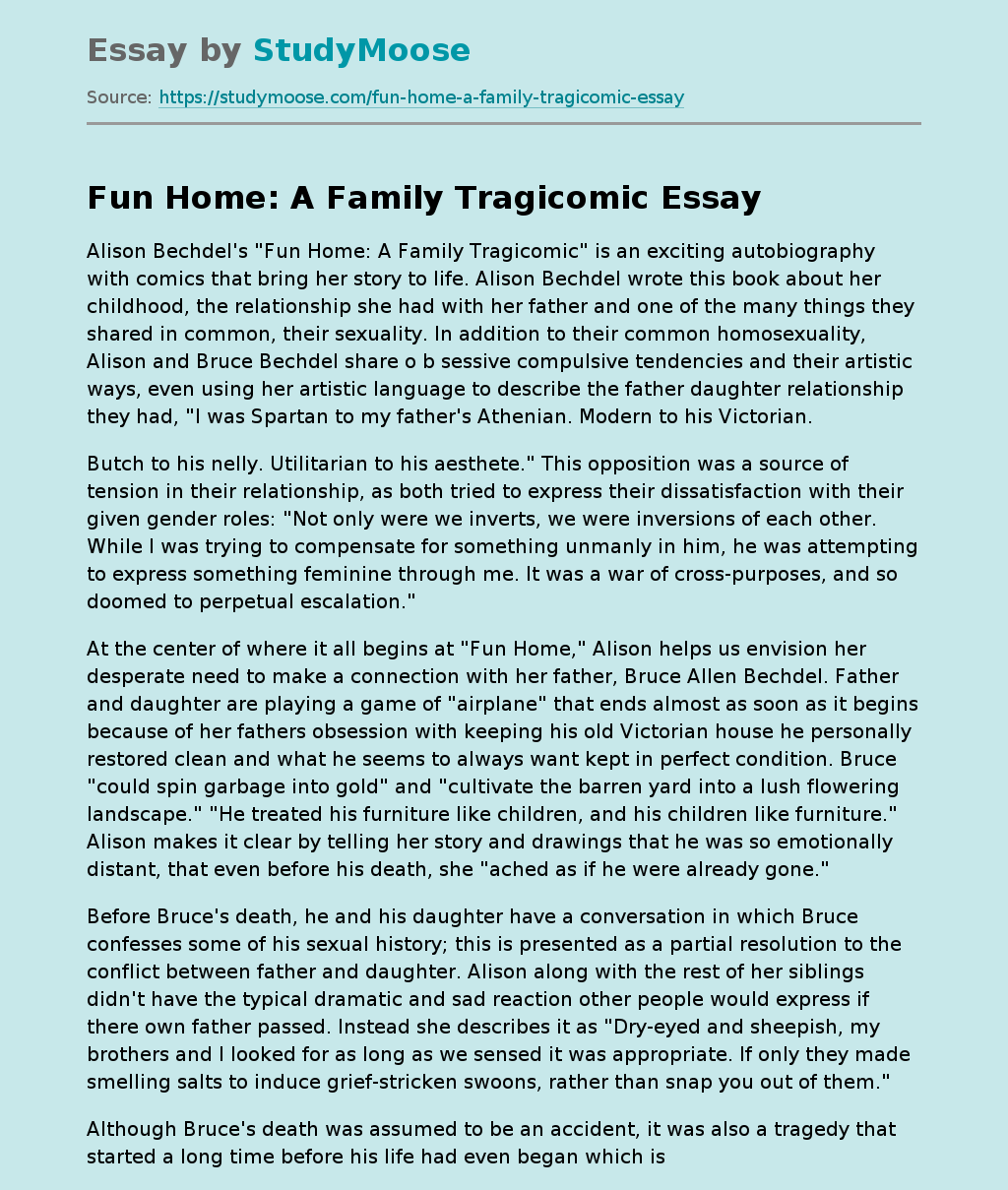