On a cold summers night the fire department received a two-alarm house fire. When the first-in engine arrived on the scene they reported heavy smoke and flames visible from the exterior. Others units then arrived on the scene to help battle the blaze that destroyed the two-story house. Thankfully, no one was injured. Fire investigators determined the cause of the blaze was a candle that has been left burning unattended while the homeowners left the house. Accidents like this are the reason for fire safety awareness.

Don't use plagiarized sources. Get your custom essay on
“ Fire Safety Education ”
Get custom paper
NEW! smart matching with writer

Fire safety is an essential part of education for both the public and firefighters that has proven to decrease the risk of accidental fires and fire related deaths.

The history of the fire service dates back to the early days of history. The service has evolved dramatically from the beginning. The first records of the fire service were recorded when a firefighting force emerged “during the rule of the roman empire” (Lincolnshire 1). The first try of using a fire brigade didn’t work as planned as nearly a quarter of Rome went up in smoke under rule of emperor Augustus.

The first fire brigade used slaves to attempt to put out the raging fires. Later “Britain got its first organized fire brigade in 43 AD when the Romans invaded. After they left Britain’s first fire brigade disbanded” (Lincolnshire 1). At these early times in history people begin to realize the need for a fire department and the uses for spreading fire safety to protect civilians came about.

The main reason for teaching fire safety evolved from these times. It is meant to protect and help save lives when fire is present in ones environment.

Firefighting is one of the most honorable jobs in America. They play a major role in the communities in which they work. Firefighters don’t only work to put out fires that occur but also spend much of their time educating the public in an effort to help prevent fires before they start. Webster’s Dictionary defines fire safety as: public education and awareness to help reduce the risk of fires (“Fire Safety” 500). Fire safety is a simple and inexpensive in educating the public and can be very helpful in preventing fires (Elken 641). Many fire departments get the community involved in programs to educate people of all ages.

There are many types of programs and ways to make fire safety education realistic and interesting to learn about. One of the simplest and most inexpensive ways to share life-saving information is through the public service announcements (Elken 641). Some examples of this are methods such as radio and television commercials. Some fire departments have fire safety trailers. These trailers have often been remodeled to make the living areas of a house realistic but in a much smaller scale. They are fixed to make the sounds and a smoky environment that one might encounter if caught in an actual fire. It is stressed to stay low during a fire in a smoky environment. They also have stoves and fire suppression equipment such as fire extinguishers to educate in how to extinguish small fire such as one that may occur on the stove like a grease fire.

Another great safety program takes place in schools all across the nation. “Fire prevention and education programs are put in place to teach the dangers of fire and how to evacuate the building quickly and properly in case of an emergency in the learning atmosphere” (Elken 643). Fire drills are an example of procedures that take place in the school to inform students what to do in case of an emergency. These are a few examples of fire safety programs taught around the nation.

The need for fire safety has never been higher. As more and more people move into the nation referred to as the “melting pot” more and more precautions need to be taken as the population increases. The US Fire Administration states “The US has one of the most highest death rates in the industrialized world (US Fire 1). “About 5,700 people are killed every year in fires and about 29,000 civilians are injured in fire related injuries” (US Fire 1). Furthermore, “Careless smoking is one of the most commons reason for fires in residential fires” but “arson is one of the major causes of death in commercial fire fatalities” (Elken 645). Fire safety is an essential part of public knowledge to help prevent these deaths and fire related injuries.

There are many ways to help prevent fire deaths and injuries. Statistics show “A working smoke detector doubles a person’s chance of surviving a fire. Approximately 90 percent of US homes have at least one smoke detector. Nearly half the residential fires and three fifths of fatalities occur in home with no detectors” (US Fire 2). Smoke and fire detectors can be located throughout a structure usually close to sleeping quarters. Battery or electricity or both operate them. All batteries should be changed when the time changes.

Fire extinguishers should always be placed throughout the house in case of a fire. It is not only important to have this type of devise but it is essential to know how to fully operate it. All basic extinguishers are the same in that they have a handle, and pin to pull for activation by squeezing the handle, and a nozzle that can be pointed to the base of the fire. Another system that is becoming popular and required by fire code in some establishments is the installation of sprinkler systems. The Systems “have become more cost effective and can usually be installed for .75 to 1.50 dollars per square foot (US Fire 2). It is very important to have some type of devise in the home in the event of an emergency.

It is obvious fire safety education is necessary to decrease the risk of fire fatalities. The NFPA says, “since 1980, fire calls have fallen 43%” (Top Ten 1). Firefighters hard work across the nation is paying off when it comes to public education. As the world strives to reach higher standards in technology I think there will be an even greater decrease in fires in both the residential and commercial environment. As long as the firefighters and communities continue to work together to teach people of all ages about the importance of preventing fire and how to react in the event that one may occur the rate of fire fatalities and injuries will continue to decrease. Saving lives and property is what fire safety is all about. 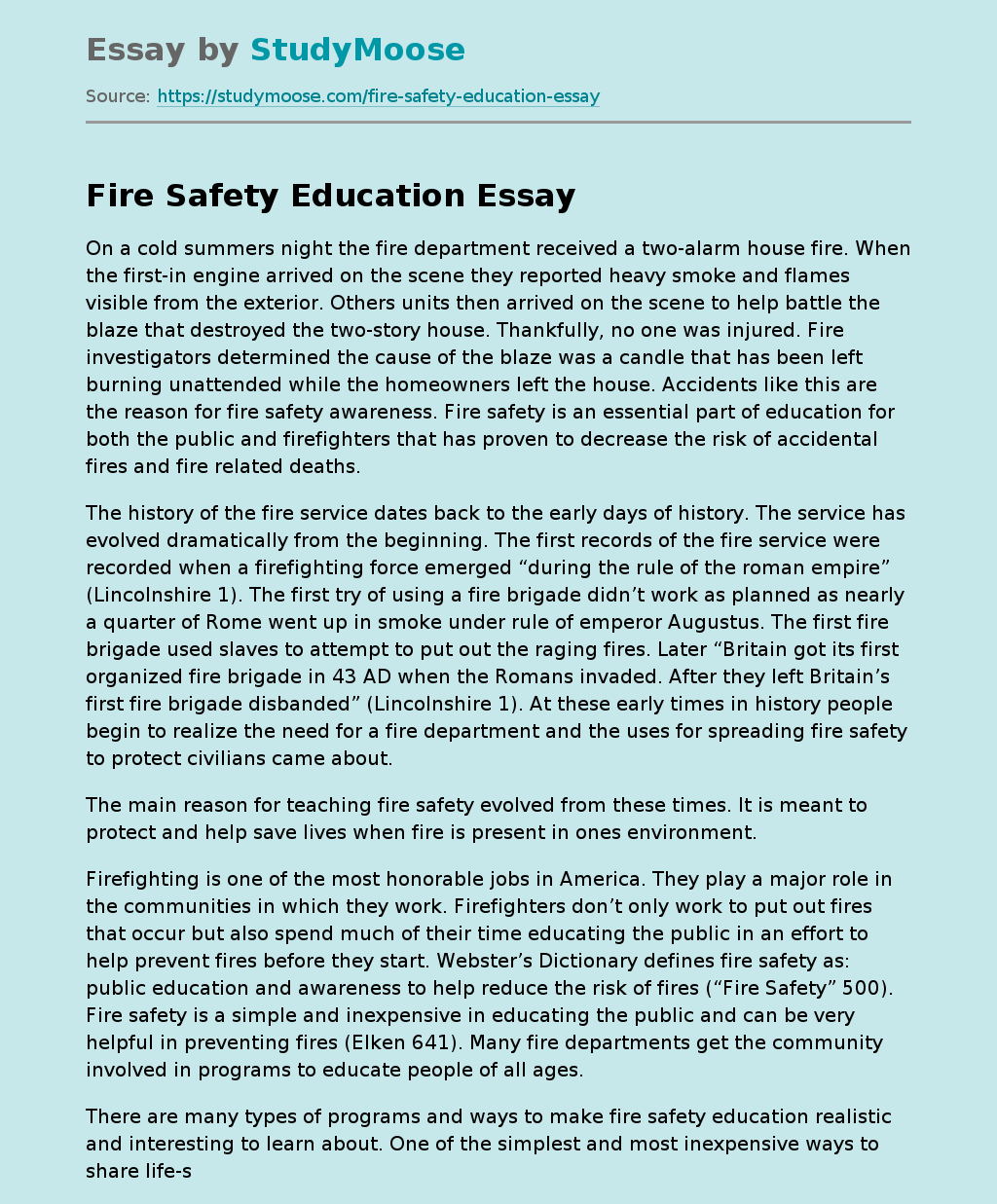