With an annual rate of a thousand movies released worldwide, the Indian movie industry is the largest entertainment sector within the world. The Bollywood industry generates an annual revenue of over $2 billion from theatre releases, TV distribution rights and optical disk releases. However, the film industry may be a vulnerable victim of piracy. As per a recent survey, India ranks at No. 4 globally for on-line film piracy.

One of the main reasons for piracy in India is that most online piracy sites and even physical disc piracy happens due to cartels finding ways to earn money to fund the sales of guns and drugs.

Don't use plagiarized sources. Get your custom essay on
“ Ways to Stop Piracy Nowadays ”
Get custom paper
NEW! smart matching with writer

Apart from the piracy aspect of this, people are forced to sell these discs and take the legal risk which might also include time in jail. All of this occurs before the initial release of the movie or show, because it is often important for the industry to leak some content as a way to attract more attention towards the topic.

Most gangs also have connections to get these leaks before anyone. This happens mainly for Hindi, Tamil and English movies in South India.

How piracy spoils the movie industry

A major problem of pirating movies is that the filmmakers and producers do not get the money which they put into the movies. Studies show that close to 25% of a movies value is lost due to piracy, apart from this for the consumer this means that quality is lost due to the fact that they do not put their entire effort for the coming movies.

Another good reason it spoils the movie industry is that the habit of going to theatres is slowly fading away, there might soon be no more theatres in existence in the next 30-40 years if piracy is not aptly combatted.

Many think naively that studios cannot be hurt too much, because after all, you hear mostly about the movies that make hundreds of millions of dollars. But the reality for many filmmakers is that they often live on the edge, seeking financing to produce quality content, and enduring high uncertainty about whether they will be able to pay off debt and have any profit left. Given the higih fixed cost of producing a quality movie, losses from piracy can be the difference between making a profit or not.

Many think naively that studios cannot be hurt too much, because after all, you hear mostly about the movies that make hundreds of millions of dollars. But the reality for many filmmakers is that they often live on the edge, seeking financing to produce quality content, and enduring high uncertainty about whether they will be able to pay off debt and have any profit left. Given the high fixed cost of producing a quality movie, losses from piracy can be the difference between making a profit or not.

The problems that piracy generates are particularly problematic for new and independent filmmakers, who don’t have the financial backing of major studios. Independents typically seek funding prior to production from film distributors and exhibitors worldwide, a practice known as presale financing. Many of these deals are struck at AFM, which is organized by the Independent Film and Television Alliance (IFTA). Most artists struggle to make ends meet as they pursue their creative work with passion and dedication. Taking that little away slowly kills the industry by demotivating the artists. According to Forbes magazine, close to 55 millionUS dollars are lost to piracy of movies.

For the first time since smart phones came out, 2018 was the first year that smartphone sales rate has not increased. This possibly means that the people of most developing countries and developed countries are capable of buying smartphones, this basically means that it is easier than ever to send and receive movies illegally.

Apps like shareIT and telegram make it easy to send and receive movies in less than a few minutes. Apart from these, internet rates have drastically reduced giving more opportunity than ever to download movies. File compressing soft wares have become very efficient, to an extent that you can download a full movie of good resolution with only 300 mb of data. Electronic devices have also become very portable and easy to transport meaning you could easily download a movie anywhere you want to.

In India, it is also very easy to acquire CDs or DVDs of pirated content such as movies and TV shows. You might often find street vendors of theses discs, they range from ?50 to ?100 and are a fraction of the cost of buying a blue ray disc or a sealed copy of the movie or TV show.

Looking at the worldwide scope of video content piracy activities, there is both cause for hope and cause for alarm. On the one hand there are increasing trade initiatives that appear to be operating and at least stopping the acceleration of piracy; on the opposite there are a lot of ways for the pirates to induce bootleg content to the buyer.

One of the most-effective ways to cut back piracy is by reducing incentives for the viewers. Effectively this could be done by reducing quality for those who don’t pay money for the service. It’s remarkable to notice that the new Disney+ streaming package launching by the top of this year is coming back to market at a $6.99 once-a-month price point. For better or worse, the bar is about in between their providing and Netflix costing $12.99 at the high-end.

There are a range of countermeasures that TV Service suppliers will use to interrupt and take away pirated content, from the standard take-down notices to more and more refined real-time messages. With the proper anti-piracy services, operators will establish customers who are looking at bootleg streams and incentivize them switch to legitimate services. 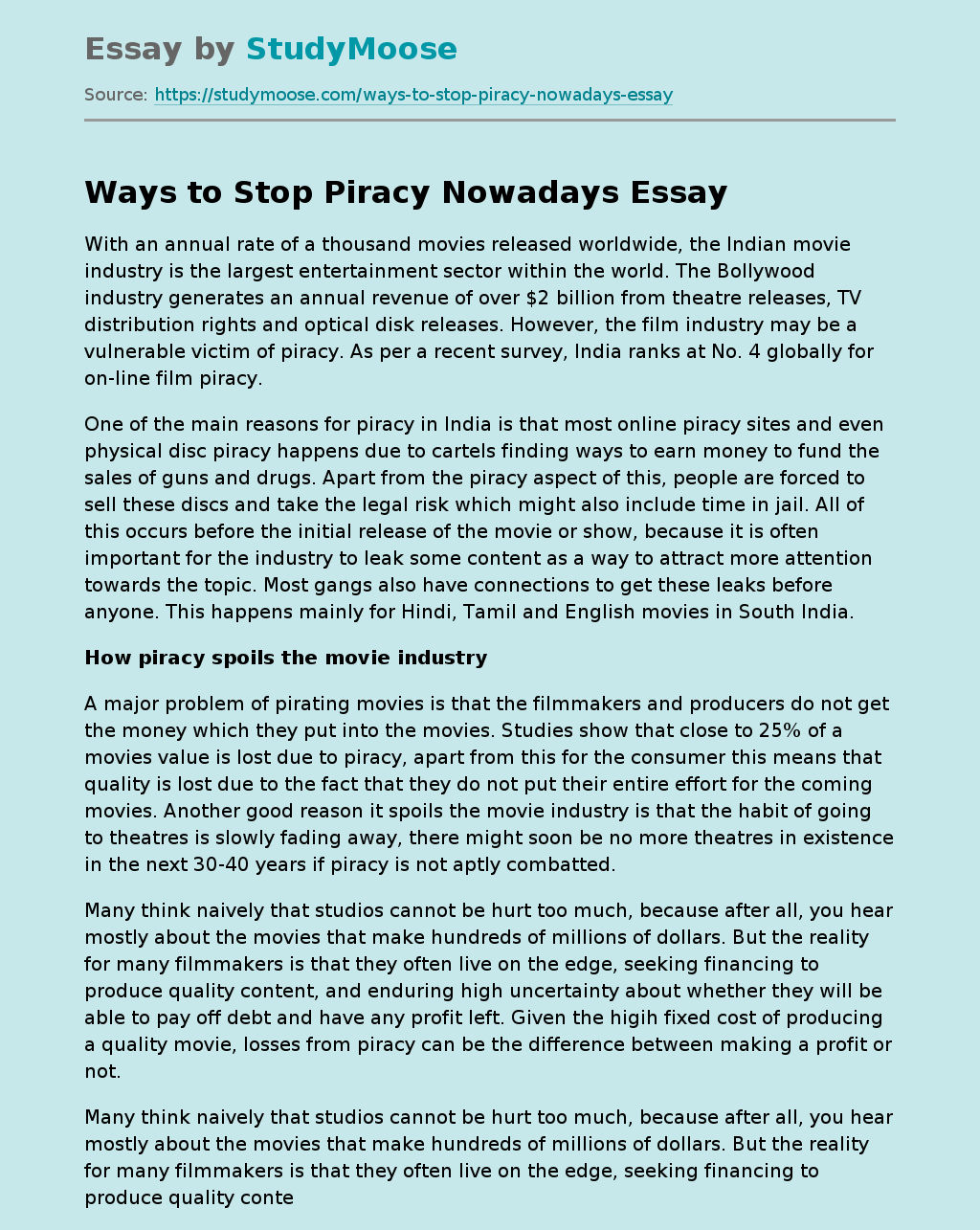