“The Finland Phenomenon” a name given to Finland’s admired education system. It is listed as the most surprising school system in the world. Its success is intently watched by other countries. The assigned video “Finland’s Education Success” was documented by Tom Burridge of BBC World News America on April 6, 2010. Week four Reading Journal for English 101 was a writing assignment asking students if the system could be implemented in the United States. “Finland’s schools score consistently at the top of the world rankings yet the pupils have the fewest number of class hours in the developed world.

Don't use plagiarized sources. Get your custom essay on
“ Finlands Education System ”
Get custom paper
NEW! smart matching with writer

The proof is in the results and Finland has an education system other countries should learn from and envy.

The transformation of Finland’s education system began 40 years ago as a key component to an economic recovery plan. The educators had no idea it was so successful until the year 2000, when a standardized test was given to fifteen years old students. The results revealed the scores.

The Finnish youth came out on top as the best readers in the world. Three years later the youth led the scores in math as well. “By 2006 Finland was first out of 57 countries. The Finnish answer to standardized testing has been to only give exams to small groups of students and to trust in teachers. In 1991 the National Board of Education closed its inspectorate.

“Teachers in Finland design their own courses using a national curriculum as a guide and spend about eighty percent as much time leading classes as their U.

S. counterparts do. ” Finnish teachers have sufficient opportunity to plan lessons and collaborate with colleagues. “Teachers in Finland spend fewer hours at school and less time in the classroom than American teachers. In 1979 reformers decided that every teacher in Finland earn a fifth-year master’s degree in theory and practice at one of the eight state universities. From that time forward teachers were granted equal status with doctors and lawyers. Teaching programs were flooded with applicants not because the salaries were that high, but because respect made the job so attractive. Pasi Sahlberg a former physics teacher points out “We prepare children to learn how to learn and not how to take a test”.

All children- clever or less so- were to be taught in the same classrooms, with lots of special teacher help available to make sure no child would be left behind. ” Compulsory school in Finland doesn’t begin until children reach the age of seven. “Children learn better when they are ready. Why stress them out? ” Finnish culture values childhood independence children get themselves to school by either walking or biking. Upon arrival at school, children remove their shoes to maintain a relaxed atmosphere. Finnish children spend far more time playing outside even in the depth of winter. The children can’t learn if they don’t play.

The children must play” The Finnish children are provided with seventy-five minutes of recess a day compared to the average of twenty-seven for U. S children. Finnish schools don’t assign homework because it is assumed the task is mastered in the classroom. Children are also mandated to take lots of arts and crafts and learning by doing. This is a far cry from the U. S concentration on testing in reading and math since the enactment of No Child Left Behind in 2002. The focus in Finland is on the individual child.

If a child is falling behind, the highly trained staff recognizes and addresses the issues to meet the child’s needs. Nearly thirty percent of the children in Finland receive some kind of special help during their first nine years in school. The true focus on education is “equal opportunity for all. ” Finnish educators have a hard time understanding the United States’ fascination with standardized tests. “Americans like all these bars and graphs and colored charts. ” ‘It’s nonsense. We know far more about the children than these tests can tell us. Finland has a culture of collaboration between schools, not competition.

All schools perform at the same level and there is no status in attending a particular facility. Finland has no private schools and all Finland’s schools are publicly funded. It is surprising to know that Finland spends about thirty percent less per student to achieve their far superior educational outcomes. The people in the government agencies running the schools from the national officials to the local officials are educators, not business people, military leaders or career politicians.

The United States has muddled along in the middle of the pack for the past decade. Government officials have attempted to introduce competition into public schools. President Obama’s Race to the Top initiative invites states to compete for federal dollars using tests and other methods to measure teachers, a philosophy that goes against everything the Finnish schools stand for. “If you only measure the statistics, you miss the human aspect. ” Fortunately United States Federal policies continue to move away from the rigid certainties of the No Child Left Behind legislation.

The law has set an unrealistic target for one hundred percent student proficiency in every school by 2014. I couldn’t agree more with the Finland approach to education. In order for the United States to come close to Finland’s success a major change would need to occur. A change I believe would take decades to complete. “The Finns have made it clear, that in any country, no matter its size or composition, there is much wisdom to minimizing testing and instead investing in broader curricula, smaller classes, and better training, pay and treatment of teachers. The United States should take heed. ” 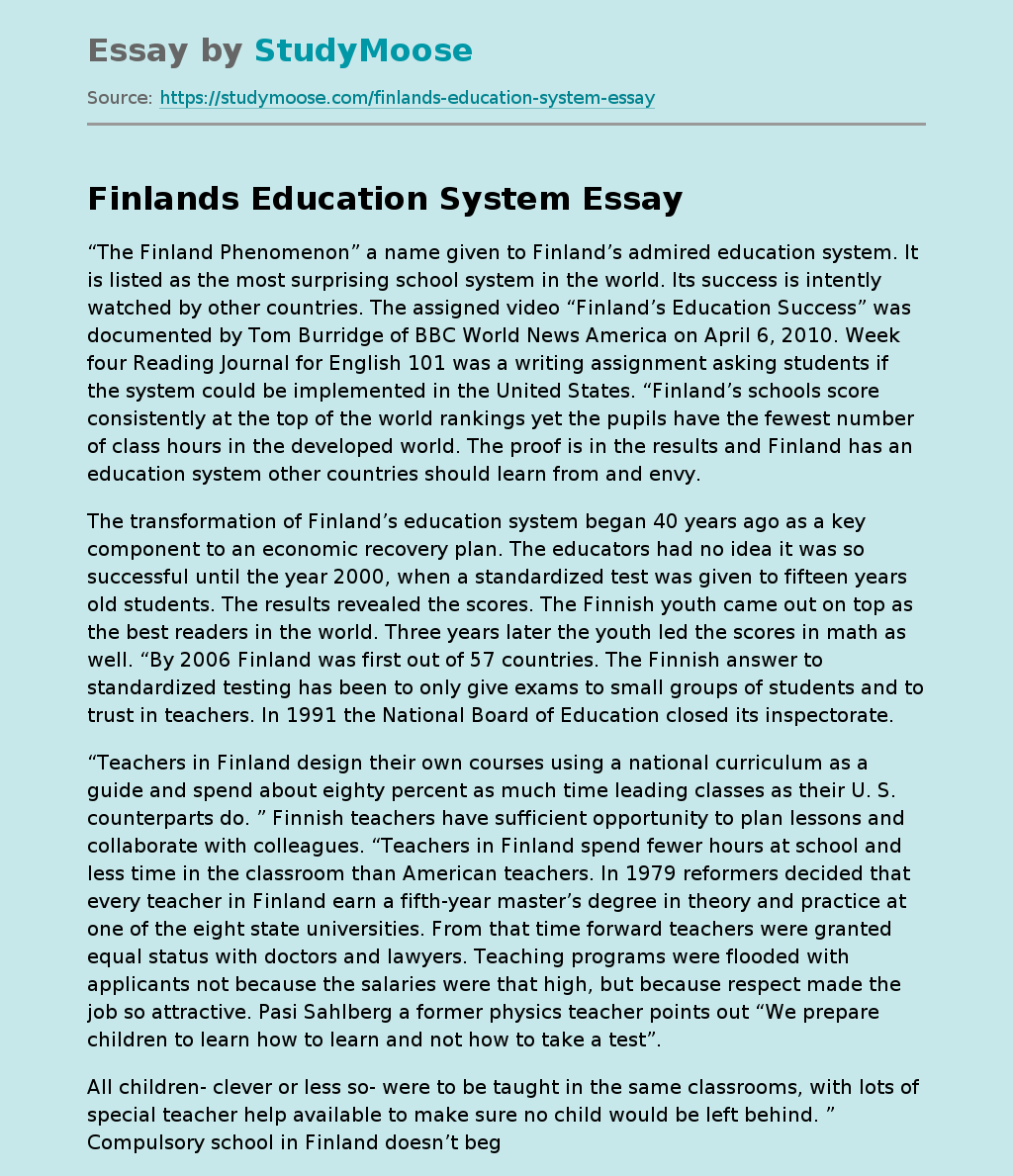