Injustice in the Education System

Educational inequality takes place where the worth of education accessible to pupils is directly related to their class. Unequal allocation of resources to children with different socioeconomic status backgrounds has been linked to lower test scores and low college enrolment rates.

However re cent researched proved that as of the moment there are three preeminent educational injustices that infects almost all kinds of education systems, and these are: Educational promotion inequalities (or) Arbitrary tracking systems, racial categorization (gender, geographic, institutional) and Displacement of control (misallocation, disproportion, unresponsive.

) In the U. S. , school quality and availability of resources are determined by the amount of funding that schools receive.

In neighborhoods inhabited by predominantly working and lower class families, properties are less expensive, and so property taxes are much lower than those in affluent neighborhoods.

Consequently, funding for the schools districts that working and lower class children are assigned to is also significantly lower than the funding for the school districts that children of affluent families are assigned to. Thus, students in working and lower class schools do not receive the same quality of education and access to resources as do students from affluent families.

The reality of the situation is that distribution of resources for schools is based on the socioeconomic status of the parents of the students.

As a result, the U. S. educational system significantly aids in widening the gap between the rich and the poor, a gap that has increased, rather than decreased, over the past few decades due to lack of social mobility (Haycock,1987). Wage gaps Wage gaps for paid work-one form of disadvantage and oppression based on gender- though slowly shrinking, persist in the united States and across the globe. Social mobility Social mobility refers to the movement in class status from one generation to another.

It is related to the “rags to riches” notion that anyone, with hard work and determination, has the ability to move upward no matter what background they come from. Contrary to that notion, however, sociologists and economists have concluded that although exceptions are heard of, social mobility has remained stagnant and even decreased over the past thirty years (NEA, 1990). Some of the decrease in social mobility may be explained by the stratified educational system.

Since the educational system forces low-income families to place their children into less-than-ideal school systems, those children are typically not presented with the same opportunities and educational motivation as are students from well-off families, resulting in patterns of repeated intergenerational educational choices for parent and child, also known as decreased or stagnant social mobility(Lareau, 2003). Other factors Social immobility expresses itself in lower class children who follow in the same footsteps as their parents, mainly not obtaining higher education.

The result of such choices is that the poor remains poor and the rich go to college. Reasons for poor children opting to not pursue college range from a variety of different explanation. Lower class children have not grown up with the same expectations of life because these have not been instilled in them by their parents, or most importantly, by the educational system. The U. S. educational system fails its lower-income students by not providing them with the same access to resources and opportunities as it does to its more affluent students.

Furthermore, several studies have shown that programs such as gifted education and tracking (education) further manage to separate those with higher level skills from those with lower level skills, which often happens to be the rich from the poor. In fact, the vast majority of children in gifted student programs happen to be middle-class Caucasian. This is not to say that poor students are not as smart as rich students, but it does imply that they have not received the same opportunities in childhood to develop certain skills.

Middle and upper class students grow up with parents who foster their intellectual and educational development by engaging in a child raising approach known as concerted cultivation. This approach values education and learning, and parents engaged in this form of parenting value visits to the museum, extracurricular activities, homework, tutoring, and reading to their children. Furthermore, middle and upper-class parents can afford to place their children in significantly better childcare centers before they enter grade school.

As the Carolina Abecedarian Project (below) found, these are essential elements in future educational and life successes. Evidence for the unequal distribution of college students’ socioeconomic status can be seen by examining college enrollment rates and demographics. One study examined the top 146 colleges in America and found that the average student representation on the colleges was the following: 75% of students came from socioeconomic backgrounds consistent with the richest 25% of the population. Less than 5% of students came from the poorest 25% of the population (Leonhardt, & Scott,2005).

Zoning as a new injustice PS 194, the Countee Cullen School, is nestled in the heart of Harlem in Community School District Five, one of the poorer districts in New York City. On March 20, it was the scene of a tense hearing. The full school auditorium was fiercely divided into two camps — on the one side, parents of PS 194 students fighting to keep their neighborhood school open, and on the other side, Eva Moskowitz and her supporters demanding that the entire building be turned over to her Harlem Success Academies.

Behind that conflict was the New York City Department of Education — and not just because it was the DOE which was planning to replace PS 194 entirely with one of Moskowitz’s schools. There is a long and sordid record of DOE neglect and underfunding of PS 194 — it had one of the largest class sizes in CSD 5 and on average 7 more students per class than Moskowitz’s schools — and of the imposition of a series of ineffectual principals — five over the last five years.

Yet despite all that, PS 194 was a school that had met its Annual Yearly Progress Benchmarks under No Child Left Behind and was in good standing with the New York State Education Department until last school year. And still the DOE has decided to close it down based solely on the school’s failing grade on the city’s School Progress Reports. One can not help but wonder if that is a decision being made not on academic merit, but out of a desire to create new space for the schools of a politically powerful former city councilwoman (Gootman, E. & Gebeloff, 2008).

On March 17 of this week, parents of students from PS 194, together with parents of students from two other New York City public schools — PS 241 in Harlem and PS 150 in Ocean Hill-Brownsville — joined representatives of the Community Education Councils for those schools, the New York Civil Liberties Union and the UFT in filing suit against the Department of Education over its plans to close all three schools and replace them entirely with charter schools. The law suit charges that by closing these three schools and not replacing them with new district schools, the DOE is illegally eliminating the school attendance zone for the three schools.

All zoning changes must, by statute, go through the Community Education Councils for the district. PS 194, PS 241 and PS 150 have a few things in common. First, they serve a significantly poorer student body than the rest of their district and the city as a whole — one of the schools, PS 150, has 97% of its students receiving free lunches. Second, they have significant numbers of English Language Learners in their student population — one of the schools has as many as 1 in 5 students in that category.

And lastly, two of the three schools —PS 150 as well as PS 194 — were meeting their Annual Yearly Benchmarks under No Child Left and were in good standing with the State Education Department through 07-08. The third school — PS 241 — went from a ‘B’ on its NYC School Progress Report last year to a ‘D’ this year, meaning that the decision to close it was based on a single year’s drop in test scores. These schools and their neighborhoods need additional supports and resources, not the abolition of the neighborhood school (Walker, 1986). So what can be done to create this open contest?

First I say we need to educate teachers on the cultures of the children they will teach, and to break down old stereotypes and biases. Teachers need to believe that all students can learn in order to make a difference; student motivation isn’t the only factor. Tracking needs to be reworked into something that takes advantage of its strengths, such as offering a faster pace for those who can handle it, but doesn’t limit those who fall into lower tracks. Most important is that schools need to mix students of different races and abilities.

By mixing races in classrooms, the schools will help educate students about each other’s cultures and reduce racial tension in society, and by mixing students of different abilities lower tracks will keep up with upper tracks. Black students have been held behind for too long, and this is what needs to be done to let them back into the open contest (Epps, 1970). Privileges are preserved Why are students from privileged backgrounds more successful in schooling, and why do these advantages persist over time?

WCER researcher Adam Gamoran says economic, cultural, and social differences combine to preserve privilege across generations. Signs of change in economic inequalities affecting schooling are modest. Policymakers increasingly recognize that unequal school financing across school districts is unfair, and some are taking steps to reduce these inequalities. But this trend will do little to reduce the major advantages students from families with more economic resources have over students from families with fewer resources.

The most important resources tend to operate at the individual level, so they are unaffected by changes in the redistribution of collective funds for education (Gamoran, 2001). Gamoran says it’s difficult to predict how a rigorous system of testing on a national scale will affect trends in educational equity. In the short term, using a standardized test as the sole criterion for high school graduation would drastically reduce rates of high school completion among Blacks of all social classes. Why? Because among Whites and Blacks of the same social class, Whites tend to have higher test scores.

Economically disadvantaged students would also be adversely affected. In the long run, however, assessments incorporating higher standards could further reduce educational inequality between Blacks and Whites if • the tests were used to (a) bring about a more standardized curriculum, (b) foster a greater emphasis on learning opportunities as well as outcomes, and (c) increase incentives for schools to support minority student learning by heightening awareness of, and accountability for, unequal outcomes; and • the tests did not serve as the sole criterion for high school graduation.

(Gamoran, 2001). The pressure for testing and accountability is strong. If implemented in such a way as to enhance rather than restrict opportunity, testing may accelerate the trend toward the equalization of educational outcomes across racial groups. (Gamoran, 2001). Bibliography Braddock, J. (1990). “Tracking: Implications for Student Race-Ethnic Subgroups” Feb 1990, Microfiche ED 325 600 Epps, E. (1970). “Race, Intelligence, and Learning: Some Consequence of the Misuse of Test Results” Aug 1970, Microfiche ED 048 423 Gamoran, A. (2001). Sociology of Education, Extra Issue (2001), pp.

Injustice in the Education System. (2016, Sep 25). Retrieved from http://studymoose.com/injustice-in-the-education-system-essay 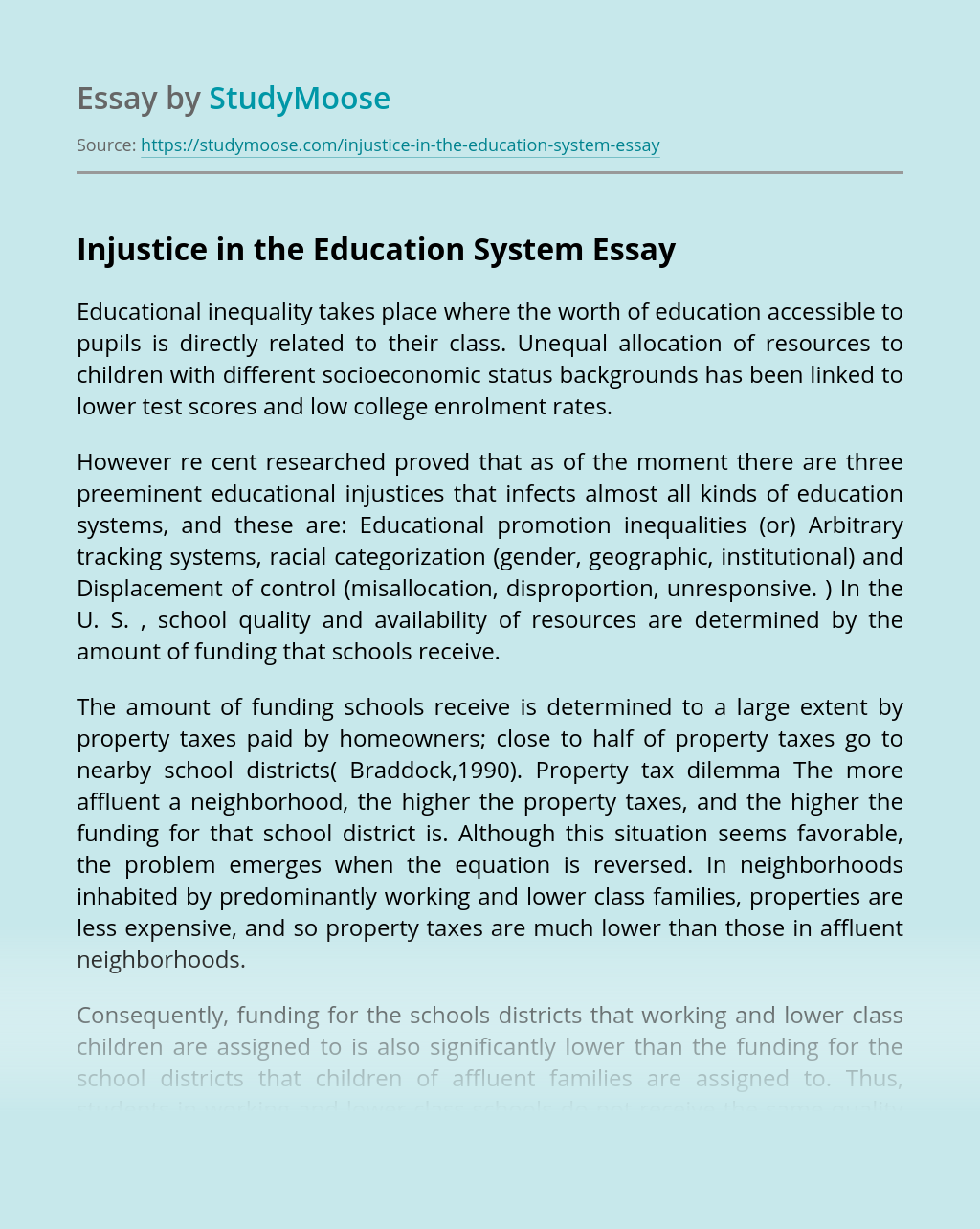 Don’t waste time
Get a verified writer to help you with Injustice in the Education System
Hire verified writer
$35.80 for a 2-page paper
Stay Safe, Stay Original