Social Injustice to me is unfairness or injustice of a society in its divisions of rewards and burdens. Social Injustice arises when equals are treated unequally and is caused by certain barriers that prevent full social justice. Some of the major barriers include: discrimination, oppression, racism, and sexism. In order to fully overcome social injustice these barriers must be removed from our society and differences must be embraced. A global social injustice that I am aware of is the lack of water sanitation that has claimed millions of lives.

Don't use plagiarized sources. Get your custom essay on
“ Social Injustice ”
Get custom paper
NEW! smart matching with writer

Inadequate access to safe water and sanitation services, coupled with poor hygiene practices, kills and sickens thousands of people every day. My main thought towards this topic is that this could have been solved by now, millions of people could be drinking clean water right now and not getting sick and dying. Canada and the USA are first world countries that make themselves look better to the public than they really are.

I understand that if North America donates millions to help the crisis, taxes and other matters concerning money will increase, but I believe that those few dollars added to taxes will help a considerable amount. The fact that thousands/millions of people are dying daily due to a fixable problem, is absurd and people should be more aware of this issue and do everything in their power to help. It is unfair that millions of people in third world countries are put out of people’s minds.

Clean water, sufficient sanitation facilities and better hygiene practices can prevent the spread of disease and even improve nutrition, because people are able to grow more crops when water is easily available.

A solution for the lack of water sanitation has already risen, UNICEF has a program for water supply and sanitation. If more fundraisers occurred, the amount of money that could be used to help clean water would increase. An example of this is at St Benedict during jean day, students pay whatever amount of money is asked to be able to wear jeans. There are around 1500 students who pay for something that benefits them, which adds up to a lot of money if most students pay. The government should create something similar to what the school does, this would gather up a lot of money that would go to a great cause. Also trips to third world countries to volunteer should be advertised much more than it is right now. This is because more people would go and help out those in need and return to share their stories which would cause a domino effect and motivate more people to go and volunteer.

A local social injustice that I am aware of is racism and discrimination. Racism is caused by people making assumptions on racial stereotypes. It divides people into racial groups which locks people out of social and economic opportunities. What makes people think that they are not equal, but superior compared to others because of their different ethnicities? The fact is, by the time a child is a toddler, they start noticing colour differences, and then in school, teachers teach not to discriminate and to just look over the difference and live equally. That would seem like enough, but unfortunately schools aren’t the only influence that children have, because while schools teach one thing, parents can also teach them differently. There is no true way to resolve racism. As individuals we can make sure people are being treated fairly by making this possible as an individual. As an individual, making people you meet feel happy and cared for is really important as is what God would expect out of each and every one of us. Also as individuals we can take part in International Day for the Elimination of racial discrimination.

As a community and as a society racism can be resolved by organizations working together to promote positive race relations. A social injustice that takes place in a school community would be bullying. Bullies are discouraging people who act unfairly towards others, and separates others’ social classes very noticeably. My thoughts on bullying is that bullying is a harrowing epidemic, and it needs to be stopped. In the end, it’s not fun being the victim or the bully. As a victim, you go through life thinking you’re never good enough or who will make fun of me this school year? As a bully, after you mature a little you’ll be aware that you really hurt someone, and that this someone will remember what you did to them forever. Bullying has many negative effects on the victim such as self-harm, depression and suicide.

Schools do their best to avoid students from getting bullied, but it is not enough. All people can do to try and help or prevent bullying from occurring is to keep an eye out on everyone and stand up to the bully. An alternative to talking is physical fighting, which to most is not the right thing to do but if it comes down to the victim having to defend themselves, I believe it to be okay. Social injustices will continue to be a problem in the world if we don’t all work together to better our world socially and ecologically. If injustice occurs and no action is taken against this injustice, then people who hear about what happened might think this injustice is acceptable, and continue being unfair.

Social Injustice. (2016, May 13). Retrieved from https://studymoose.com/social-injustice-essay 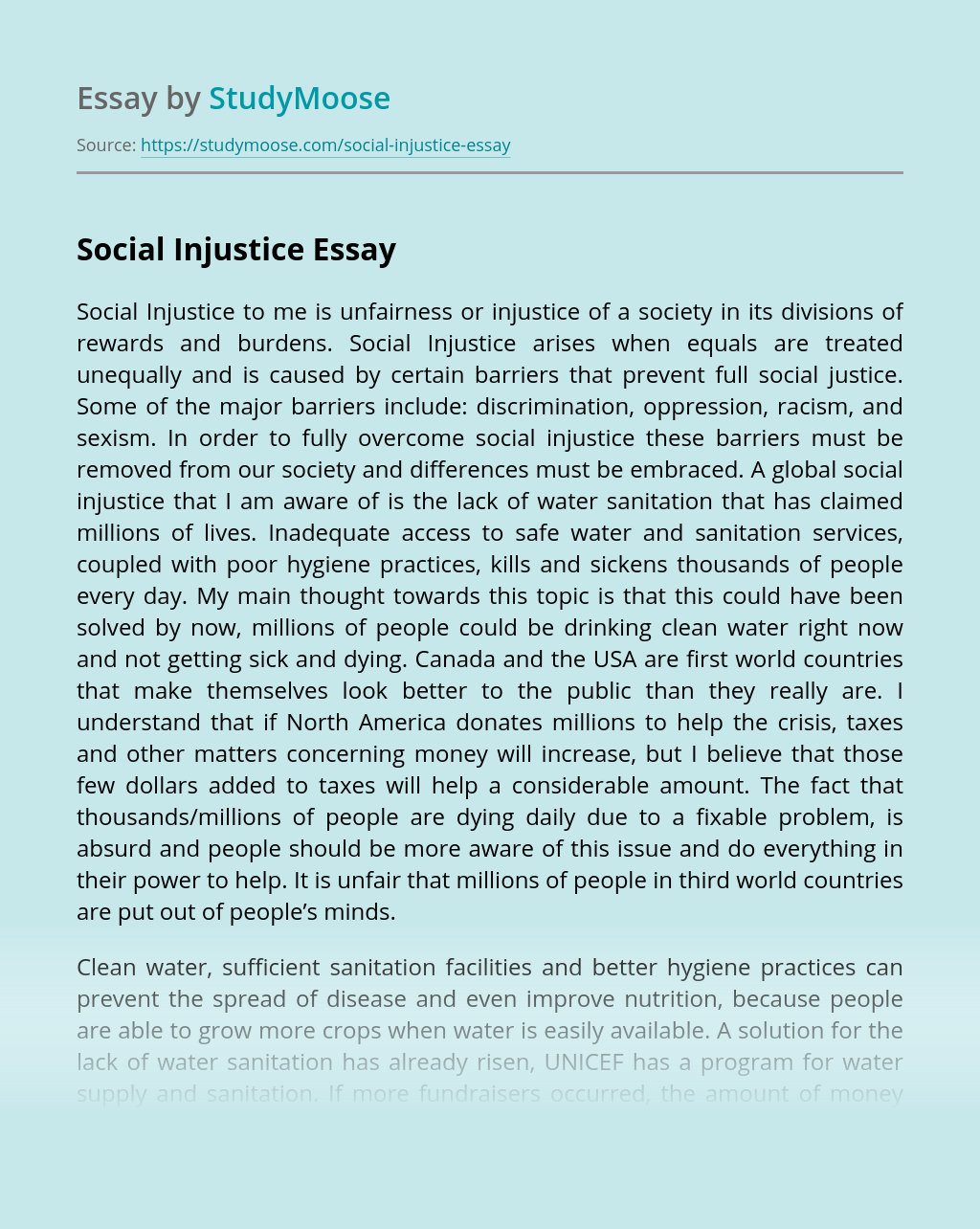