“The Hate U Give” Explores Issues of Racism and Social Injustice

Racial injustice has been an issue over the past decades. So, when choosing books to read, I focus on pieces that address these issues. For instance, I particularly enjoyed The Hate U Give a fiction novel portraying the racial and systematic injustices African Americans face in America today. The main character of the book, Starr Carter is a young African American teenage girl who witnessed the police shooting of her childhood friend, Khalil, when the officer mistakenly confused his hairbrush for a gun.

Don't use plagiarized sources. Get your custom essay on
“ “The Hate U Give” Explores Issues of Racism and Social Injustice ”
Get custom paper
NEW! smart matching with writer

After witnessing this incident, she now feels pressure from all sides of the community because his death became a means to protest racial injustice throughout the community. Starr felt like she had to lead the protest being that she was the witness and she was not prepared to. Starr must overcome her fears and stand up for what she believes is right. Although some critics may consider racism a harsh subject, most audiences will find some part of the novel enjoyable, whether it be the family support system that the main character possesses, or the way bravery is shown throughout the book.

The Hate U Give is a quality novel because it portrays a relatable main character who powerfully overcomes obstacles and conveys a perspective on how systematic racism is dealt with in America.

The most significant aspect of the book to me was that the main character was very relatable despite background and ethnicity. In the book, Starr faced issues with keeping her home and school life secluded.

She attends Williamson Prep, which is a primarily white private school, but she lives in Garden Heights a mostly poor, African American neighborhood. Throughout the novel Starr states having to be “preppy Starr” at school and that she felt as though she could never be her true self around the people she went to school with because she was black and did not live a wealthy lifestyle like her peers. I feel me and this character relates because being an African American person I always felt like I had to hang out with people that are the same race as me and when I was around others that were not I had to act differently to impress them. Furthermore, I find her relatable when it comes to her family dynamic because my family shows similar aspects. It gives a realistic view of a true family and that they only want the best for each other, which was fairly impressionable while reading this novel. Ultimately, The Hate U Give maintains a relatable main character by including the struggles of her life, such as keeping her public and private life separate while also standing up for what she believes in and all while maintaining the support of her family.

The second strongest aspect of this novel is that it conveys a perspective of how systematic racism is exemplified within America. Portraying the events through Starr’s eyes, this book displays how the media presents young black men as guilty until proven innocent. Starr chooses to confront a system that she knows is working against her. She fears speaking out, and not speaking out. Khalil’s shooter may evade justice if she does not speak out. It was stated in the media that Khalil was a possible gang member. This information led to the media and the community to believe that Khalil’s death was justified. Furthermore, the officer who committed the shooting was not allowed to interact with the media on his innocence. They allowed a relative to do it in order to protect him from the media. Overall, The Hate U Give conveys a perspective of how systematic racism is perpetrated within America. Portraying Khalil in a negative way in the media to validate his death and shielding the officer who committed the shooting from the media are two examples of systematic racism.

Although, The Hate U Give is a noteworthy novel because it presents a relatable main character and a realistic situation. Melina Abdullah and Patrisse Khan-Cullors may object that the book is motivated by the Black Lives Matter movement. The Los Angeles Sentinel states that the book “makes black people responsible for their oppression.” However, in my view, The Los Angeles Sentinel is wrong because Khalil was unarmed and already had a judgment formed against him by the police officer. More specifically, I believe that racial bias is already set in the justice system which is allowing so many unarmed shootings against unarmed black men to go unpunished. Racial bias is also why African American men are sentenced longer to jail than any other race even if the same crime is committed. For example, People protest for change because they know the justice system is unreliable. Although the Los Angeles Sentinel may challenge my view by insisting that this is not a Black Lives Matter book, I maintain that it is. Therefore, I conclude that this book examines the perspective of systematic racism and is motivated by the Black Lives Matter Movement.

The Hate U Give is a valuable narrative because it depicts a relatable young African American female main character who powerfully conquers obstacles and expresses a perspective of how systematic racism is portrayed within America. I uphold that the book shares with all races, ages and genders the types of struggles African Americans face. I conclude that Thomas provides a glimpse into some of the struggles of the African American community. The Hate U Give will always be a quality fiction novel because it upholds a perspective of how racism is dealt with currently in America and provides insight to those who know little to nothing or dismiss and, underestimate the seriousness of this issue.

“The Hate U Give” Explores Issues of Racism and Social Injustice. (2020, Sep 27). Retrieved from https://studymoose.com/the-hate-u-give-explores-issues-of-racism-and-social-injustice-essay 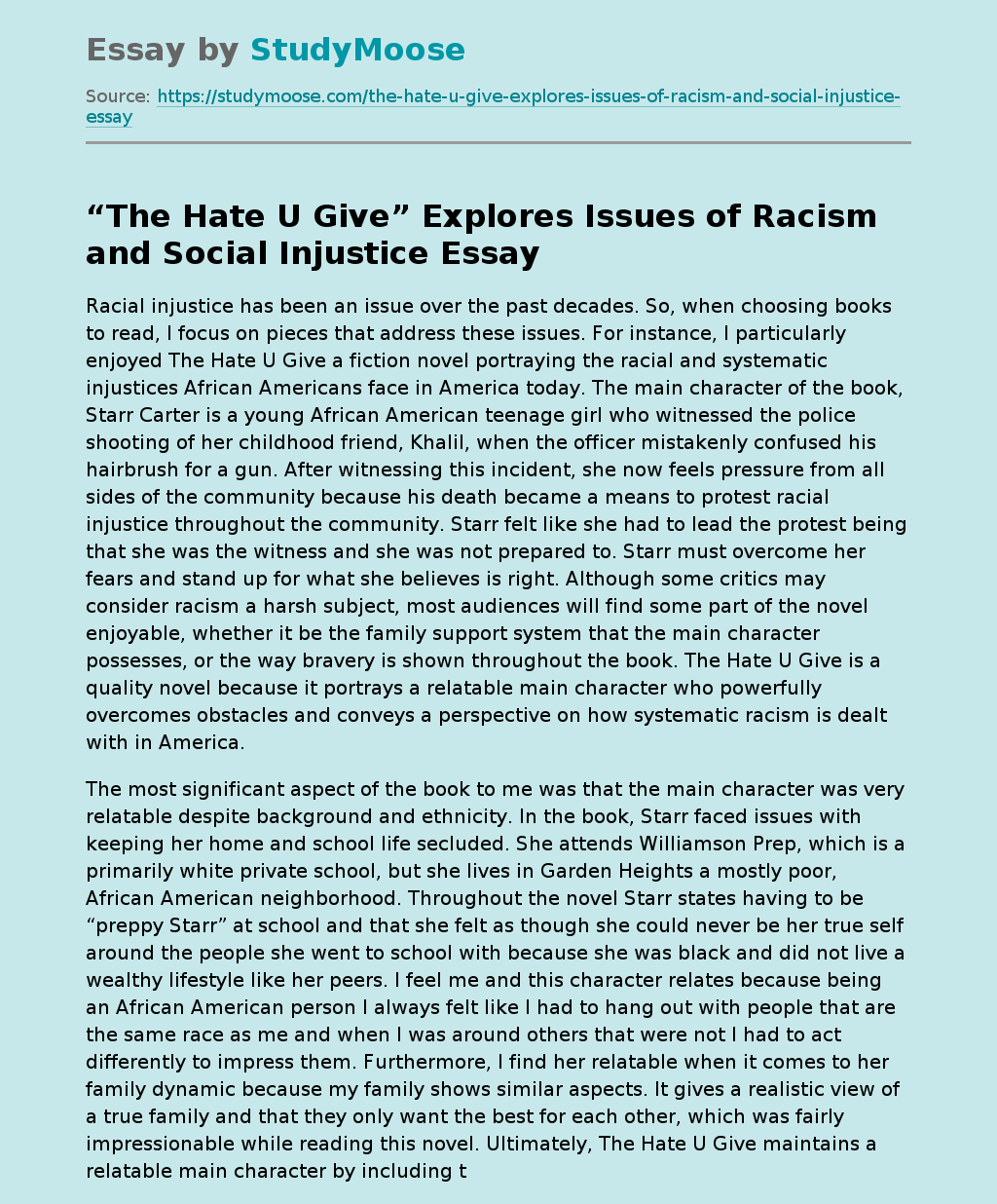