Glory captures the heroism of Colonel Robert Gould Shaw and the first black regiment in the Civil War, the Massachusetts “Fighting” Fifty-fourth. An extremely talented cast and crew earned three Academy Awards (cinematography, sound and supporting actor) and five nominations for their work in Glory. The outstanding cinematography, sound, score and acting recreate the events leading up to the Union attack on Fort Wagner on July 18th 1863.

Don't use plagiarized sources. Get your custom essay on
“ Film “Glory” ”
Get custom paper
NEW! smart matching with writer

After months of training and exploitation for physical labor, the Fifty-fourth gains the opportunity to fight in an attack on Fort Wagner on the beaches of South Carolina. Poised to dispel the belief that blacks would not be disciplined under fire, the Fifty-fourth leads the almost suicidal attack on Ft. Wagner. There Col. Shaw valiantly falls and the Fifty-fourth, suffering great losses, displayed the courage that persuaded the Union to enlist many more black soldiers.

Matthew Broderick delivers a noteworthy performance in the role of Col. Shaw, which Leonard Maltin calls his most ambitious part. In an interview for the New York Times, Broderick spoke of his method acting, “The first step [in preparing for the role of Robert Gould Shaw in Glory] was to try to learn as much as I could about the real person. That was mostly from letters, photographs, descriptions and a poem by Emerson.

The thing I had to do was bring myself into that situation. I didn’t want to be an imitation of what I thought Shaw must have been like.” Broderick’s acting talent has been noted on Broadway as well as in films. Broderick won a Tony Award for his performance in “Brighton Beach Memoirs” in 1983, a year after his film debut in Max Dugan Returns. (Maltin, 102) But it was his role as a computer hacker in War Games and his role as a handsome young teen touring Chicago in Ferris Bueller’s Day Off that alerted moviegoers to his talent. Denzel Washington has received critical acclaim for his role as Trip (as well as an Oscar for Best Supporting Actor). Denzel commented on the role of Trip in an interview with the New York Times. “Trip’s an instigator – wild, rebellious, angry. He’s a product of racism who’s become a racist. He hates all white people, Confederates most of all. But in the end, when he sees the white officers make the maximum sacrifice, he’s the most patriotic one in the bunch.” Director of Glory, Edward Zwick described Washington by stating, “Whatever that mysterious chemical process is that makes the camera love someone, he has more of it than any one person should.”(Maltin, 921)

It is that presence that earned him an Oscar for Glory and nominations for his roles in Cry Freedom and Malcolm X. Equally as important as acting to the impact of the movie Glory is the Musical score composed by James Horner. In the final battle scene in Glory, Horner chose the Boys Choir of Harlem which creates a moving effect during the death of Col. Robert Shaw.(Magill, 158)

Horner won a Grammy Award for the score for Glory. He was nominated the same year for an Academy Award for the score for Field of Dreams. Horner’s previous Grammy Awards include song of the year and best song written for a motion picture or television, all for “Somewhere Out There” from An American Tale in 1987. (CTFT, 228) Leonard Maltin calls Horner one of today’s most prolific film composer’s. Horner composed thirty one motion picture scores from 1979 to 1989. (Maltin, 411) There are many elements that contribute to the success of a film. Glory combines the best cinematography, sound, score, and acting to create a moving representation of this portion of U. S. history. Roger Ebert called it a “strong and valuable film.” In his review written for the Chicago Sun-Times, Ebert notes the amount of effort devoted to accurate period detail. One of Ebert’s criticisms of Glory is that the perspective of the movie is constantly seen from one view, that of the white officer. Ebert points out that a white man is cast as the lead role when the movie is essentially about a black experience. Glory could have been told from the eyes of a black soldier in the Fifty-fourth.

Ebert makes a valid assumption when he suggest that a totally different film could be made from the same material. Indeed Glory is a story of how the freed blacks were able to prove themselves in battle. The Fifty- fourth regiment could also be considered one of the first times we see blacks look for equal opportunity. Ebert notes the scene when the black soldiers of the Fifty-fourth learn they will not be paid the regular (white) wage. “Blacks march as far, bleed as much and die as soon, they argue.”(Ebert) It would be 100 years later that they gained equal opportunity when in Vietnam both black and white soldiers were interspersed in the military. While Roger Ebert discusses the idea of a different point of view he notes that Glory is an important film no matter who’s eyes it is seen from. Blake Lukas on the other hand is far more critical of the film. In Lukas’ review for Magill’s Cinema Annual he picks at elements of the film, including weak characterization and directing that leaves something to be desired. Lukas seems at times to be lost in his own rhetoric when he writes about the dismal war genre. He delves into the number of Vietnam films that are “a far more popular subject in this period.”(Magill, 155)

After a brief synopsis of the film Lukas comments on the dynamics of the protagonist character who we see mature through the film. The remaining characters Lukas believes lack dimension. He calls the role of Cabot Forbes “fleetingly interesting” and the role of Trip, (which Denzel Washington won Best Supporting Actor for) “predictable.” He goes on further to say that the role of Rawlins portrayed by Morgan Freeman is only enlightened by this “brilliant actor’s own characteristic intelligence.” Therefore without the phenomenal acting talent presented in Glory Lukas feels the movie would be flat. In addition to finding flaw in the characterization Lukas compares director Edward Zwick to the director John Ford. Ford directed earlier Civil War films such as The Horse Soldiers (1959) or Sergeant Rutledge (1960)which based on the an all black calvary regiment in the Civil War.

Lukas suggest that Ford was able to attain a “thematic richness” that alluded Zwick. Lukas also remarks that Zwick used ineffective “emphasis on close ups and shallow focus which do little to make the film’s historical moment seem …alive in spite of admirable attention to detail in the art direction sets and costumes.” Lukas is impressed however by Zwick’s direction of the final scene in which he uses “vigorous tracking shots ” to create a “stunning effect.” Lukas also comments on the James’s Horner’s inventive use of the Boy’s Choir of Harlem. Lukas suggest that Zwick looked to appeal to contemporary audiences. Interestingly enough Lukas is surprised that Glory met with such “critical and commercial success.” I was surprised to read the review written by Blake Lukas where he constantly compares Zwick to a former director of Civil War films John Ford, and when he persist in mentioning the dismal nature of most war films. Lukas states that “Glory offers an idealism and sense of heroism that contrast powerfully to the spectacle of bloodshed and war’s waste of life that it also visualizes.” Lukas seems hung up on the waste of life that is portrayed in war film’s.

In my opinion Glory was not a movie about whether or not we as a nation should participate in wars. It was about the progress of the black race and the fierce battle they had to fight a long the way to attain each rung on the ladder of freedom. Lukas criticism seems out of place when he writes about Vietnam and the “American soldier’s potential for barbarism.” Lukas also seems hung up on the past. he makes two comments which seem out of place. First when comparing Zwick to Ford he states that Zwick does not attempt the same “thematic richness” and that “(Zwick’s) sensibilities are more attuned with the responses of the 1989 audiences.” I don’t think Zwick should be faulted for creating a film that is appealing to contemporary audiences.” I certainly would not go see a film directed by Lukas. Desson Howe reviewing Glory for the Washington Post like Lukas notes that the scriptwriter Jarre (who’s credits include Rambo: First Blood Part II) provides only a superficial characterization “his script is made better by the performers.” Howe believes that the is too much “liberal eyed giddiness (thanks chiefly to the gushy, rhapsodizing score by James Horner).” Both Ebert and Lukas acclaim Broderick’s performance of Shaw, yet Howe criticizes it writing, “In this movie he is an amiable non-presence, creating unintentionally the notion that he Fifty-fourth earned its stripes despite wimpy leadership.” This comment lead me to wonder whether Howe and I saw the same movie.

Howe notes that the performance of Denzel Washington, and Morgan Freeman uplift the film. Perhaps the reviewers did not have the luxury of time to research the history of Robert Gould Shaw or the Fifty-fourth. If so they would have found that Shaw was indeed a youthful officer given charge of the Fifty-Fourth as Colonel at the age of 26. Understanding Shaw philosophical views as an abolitionist and the societal views of blacks being subservient to whites, certainly a young man leading the first black regiment would experience a certain degree of self doubt and contradiction. In the end Shaw develops the courage to lead his men into battle to a symbolic triumph displaying the bravery of these black soldiers. Broderick’s portrayal of Shaw is credible from my point of view. The credibility of Glory is heighten by the amount of effort devoted to recreating the historical details. From the camps to the costumes Glory captures the aura of battle.

Most of the critics agree that the historical detail was a redeeming element of the film. Glory is a film that balances it shortcomings out with exceptional talent. Perhaps a lack of dimension in the characters is balanced with outstanding performances. Any faults in the directing are made up by the detail put in to the film and the superior sound and score. Glory is a carefully constructed film with a didactic theme. It is an accurate representation of the lives of Civil War soldiers. The climax of the movie is fairly accurately represented. The Fifty-fourth regiment had slightly over five hundred members when they marched into battle on July 18th, 1863. Over two hundred and fifty members of the regiment died in that battle and several more were injured. That is what proved to the white regiments looking on that the black soldiers were worthy of battle. Glory captures that triumph. 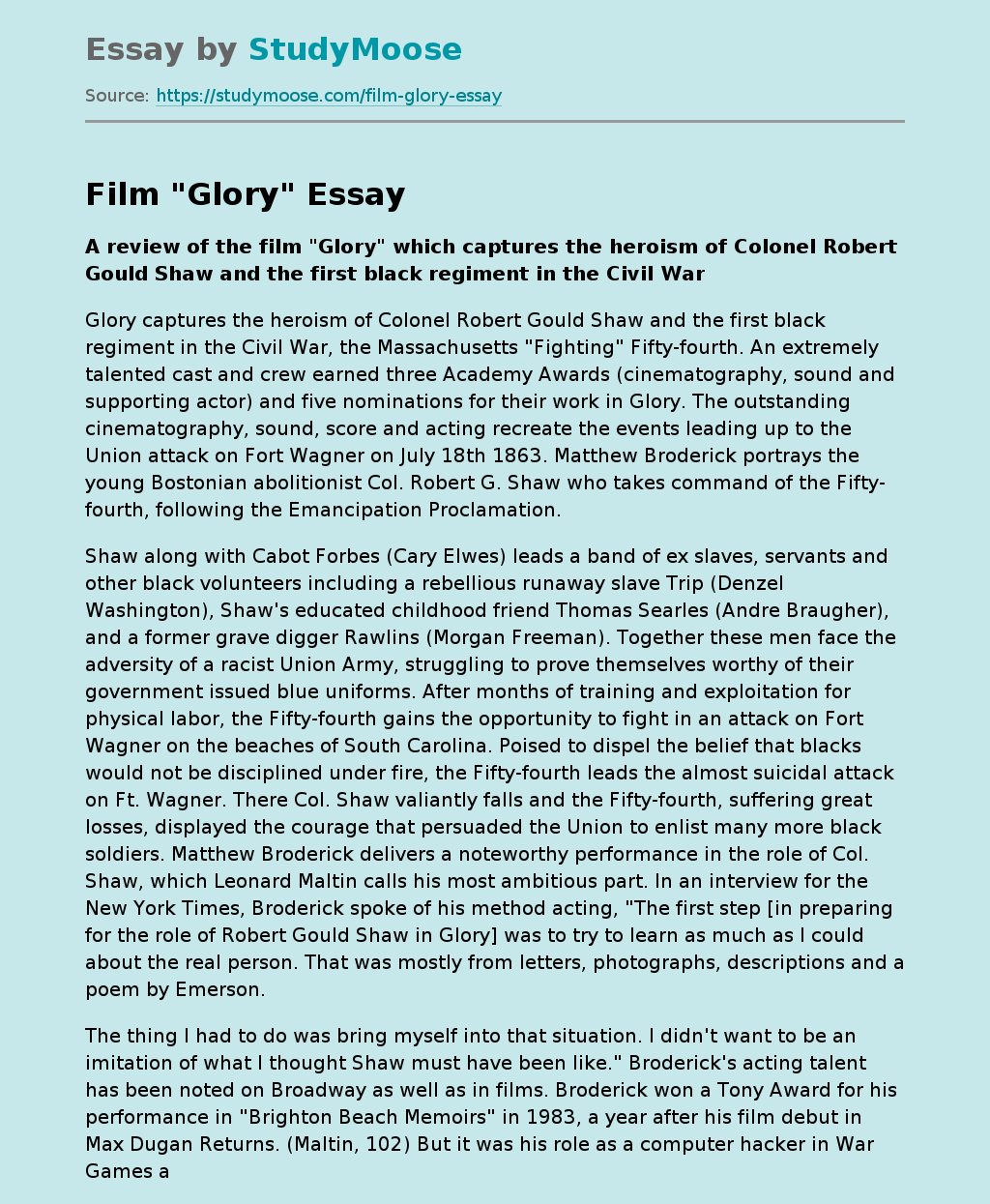