Obesity is an epidemic that is sweeping over the United States today. It’s affecting both adults and children. With the increase in fast food availability and a decrease in the time most Americans have to prepare nutritious meals at home, it’s obvious why more people are eating at fast food restaurants. Obesity is a growing problem in the United States and more and more children are being affected. But do uneducated families have the right to put the blame on fast food restaurants for the health issues they could easily prevent?

I believe that we are taking it too far by blaming fast food restaurants for obesity and that it is an individual’s responsibility to take the blame.

Don't use plagiarized sources. Get your custom essay on
“ Fast food – Obesity ”
Get custom paper
NEW! smart matching with writer

While R. A. Ames “The Food Isn’t to Blame” and Richard Daynard “You Want Fries with That? ” use different themes of blaming fast companies and individual decisions to underscore the effects of fast of food on America, the Rahul K.

Parikh in “Indiana Jones and the Kingdom of Fats Kid” picks up the same theme, he blames advertisements for America’s Obesity. In the article, “Fast Food Isn’t to Blame? ” R. A.

Ames states that weight difficulties are the responsibility of the individuals and we should not blame the fast food industry or other biological and environmental causes. Human beings are individuals with the freedom to make their own choices. Nobody forces us to eat anything we do not want to. Choosing to eat fast food is all our own decision, and we put ourselves at risk for obesity.

Obesity due to excessive consumption of fast food can only be blamed on our own actions. Fast food chains appear everywhere in today’s world. Home delivery of various foods is more accessible than ever before.

These are common excuses when overweight people blame fast food industries for their bodies. Before reading these essays, I already had an opinion about fast food in my mind. I believed that if someone was overweight or obese, that it was no one’s fault but their own. In his essay, however “You Want Fries with That? ” Richard Daynard explained why he believes that today’s fast food industry is largely responsible for the dramatic rise in obesity cases in both children and adults of America. Daynard discussed how the fast food industries played a large role in deceiving the public into buying their food.

Daynard said that society needs to find a happy medium when dealing with the fast food industry, whether it be through lawsuits or some other action! Daynard also backed up his claim by using supporting statistics surrounding fast food and obesity in America over the years. Ames’s essay on the other hand used no statistics. He based his entire essay on personal opinion. His frequent use of the word “I” also made the essay less effective. Overall, Richard Daynard had a much more objective argument about fast food than R. A. Ames.

Daynard used specific statistics, and facts about the fast food industry, and he kept himself out of the article for the most part. Daynard was very effective in making me believe his argument. Another essay I have compared R. A. Ames is with Rahul K. Parikh’s “Indiana Jones and the Kingdom of Fats Kid” . Both of these essays had strong opinions concerning who is to blame regarding obesity in America. The “Fast Food Isn’t to Blame” was more persuasive I thought because it placed the blame for the obesity problem on the individual person and what he/she put into their bodies not on the fast food industries.

According to R. A. Ames, “Americans tend to drive to Burger King and order a Double Whopper with Cheese with a King size fries instead of driving to a supermarket and pick up some turkey and whole wheat bread” (326). They are obese because they make a choice to eat fast food themselves, not because fast food chains force them to stop by their restaurants to eat their food. Ames went on to say that instead of people taking responsibility for being obese they are blaming the fast food industry. Ames compared obesity to smoking.

He made this comparison because both can be deadly and that in the end “you still have to put the cigarette in your mouth the same way you put a candy bar. After this Ames said that in the “land of the free” we are able to make our own decisions but with this freedom we as people have to be responsible for our decisions. Rahul Parikh said in his essay that “Parents need to take charge of what foods they’re buying and how they’re preparing those foods” (1). This statement is suggesting that instead of blaming fast food companies parents should control their children’s food buying habits.

They should limit their television hours where they see all those advertisements that attract them to eat fast foods. Rahul said that companies use superstars, action heroes, cartoons to promote their products in the market that attracts people and mainly children’s. Rahul compared child advertisement to obesity and suggested that today children will see 40,000 advertisements in a year. In this huge number of advertisements, two third of those are for junk and fast food. Ames and Rahul were both arguing that it is our individual choices to eat fast food, so we should not blame companies who provide them.

In our society, we are always looking for someone or something to blame for our problems. We seem to want to avoid taking responsibility for our actions and their consequences. Overall obesity has nothing to do with the fast food industry and genetics, but rather the choices. People should be encouraged to take personal responsibility for their actions and realize what they put into their mouths, and that how much exercise they do contributes to their health and well-being. When overweight people admit that they cause their own obesity, they can swiftly move away from being obese and recognize a healthy lifestyle. While in R.

A. Ames “The Food Isn’t to Blame” and Richard Daynard “You Want Fries with That? ” use different themes of blaming fast companies and individual decisions to underscore the effects of fast of food on America, One other hand Rahul K. Parikh “ Indiana Jones and the Kingdom of Fats Kid” has same theme has R. A. Ames essay, he blamed advertisements for America’s Obesity. I have discussed the Ame’s essay with my friends and family. Most of them are agreed with the essay but there were also some people who were disagreed. I eat very precisely, before eating anything I check calories and fat of the product I am going to eat. 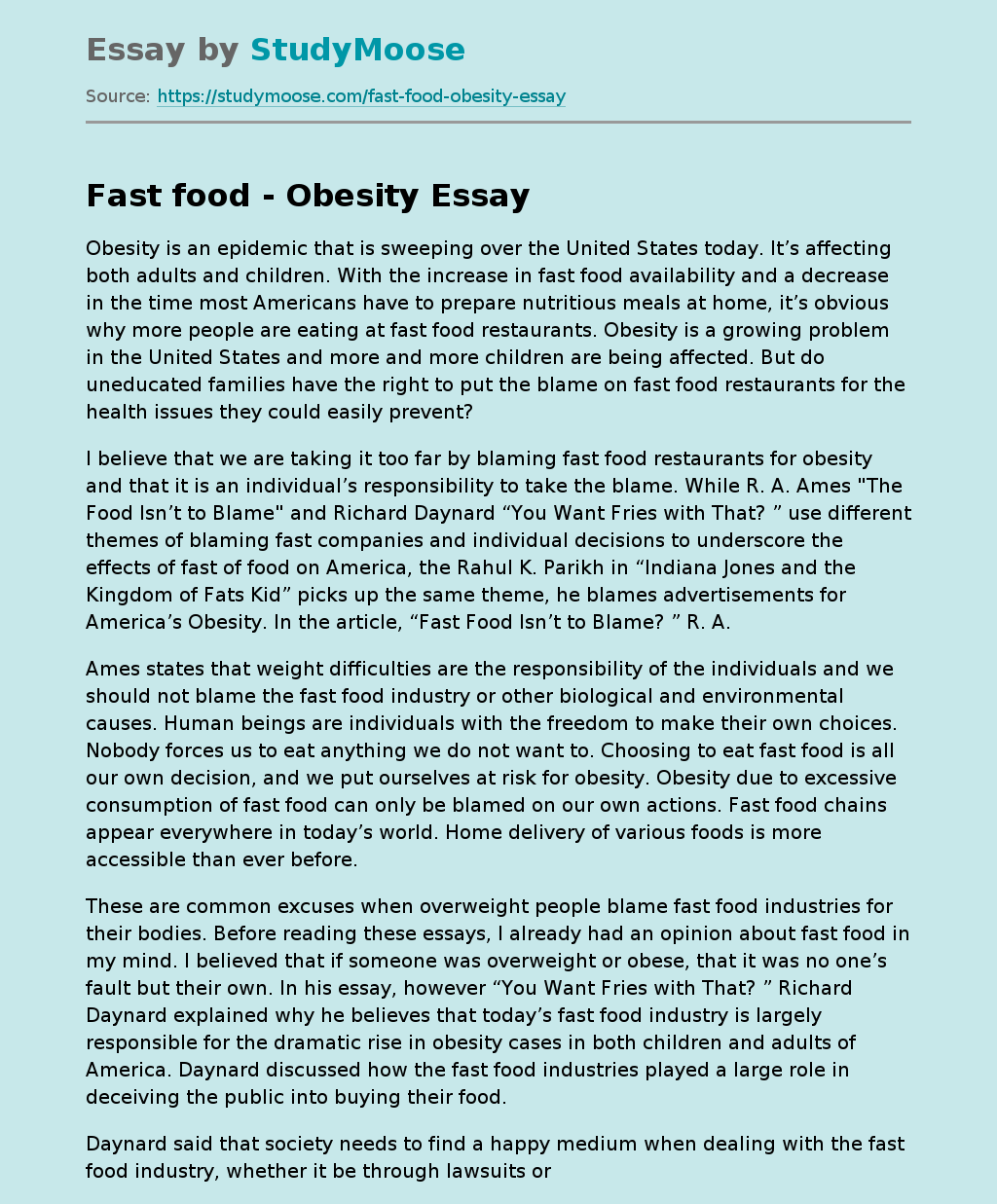