In recent years, the food and beverage industry in America has perceived children and the youth as a dominant market force. For this reason, children and adolescents have been targeted by extreme, devoted food marketers, and advertisers with negative efforts. Food marketers are fascinated by the youth as consumers because of their spending techniques, and as future adult consumers. Although genetics influences body type and size, there are other factors to consider as well, like the environment and advertising. Now a days people are gaining weight because of unhealthy food choices such as fast foods and eating in front of the television.

Don't use plagiarized sources. Get your custom essay on
“ Impact Of Food Advertising On Childhood Obesity Media ”
Get custom paper
NEW! smart matching with writer

People are indulging in high-calorie, non nutritious snacks, drinking their calories, having bigger portions on their plates, and lack of exercise are all contributing to the obesity epidemic. According to the American Psychological Association, “The childhood obesity epidemic is a serious public health problem that increases morbidity, mortality, and has substantial long term economic and social costs.” Multiple methods are used to reach youth, beginning with television advertisements, computer games, and toys in meals.

The way that marketers lure children seem unethical because children cannot comprehend the difference between reality and fantasy. Parents should show concern over the way that fast food advertising has pushed their children, invoking them to become overweight and causing tantrums. Especially for young girls with body issues the American Psychological Association states that “Advertising by other industries often objectifies girls and women, contributing to body dissatisfaction, eating disorders, low self-esteem, and depression.”

It seems today as though everywhere you turn there are food advertisements ready to entice the minds of children with delicious foods. Glorying the cheeseburger, for example, by having an extremely good looking size 0 underweight model enticing them with her beauty having them think that if they buy one of those they might look like her. Which is never the case, and is considered false advertising. Eating fast food and having a size 0 is not a reality. The reality is that we have to nourish our bodies. Nourishment is the process of getting food into our bodies and using it as unrefined materials as fuel for energy, vitamins and minerals that keep our body functioning well and healthy.

Young children are especially naive about misleading advertising and don’t begin to understand that advertisements are not always true. By watching how the advertisements attract children people should question if advertising to children is ethical. The way advertisers promote to children, they need to know what makes them happy. With the knowledge of paid psychologists, researchers and, marketers all have access to information about children’s social needs, developmental, and emotional issues. By means of research that analyzes children’s behavior, fantasy lives, creativity, and even their imagination, companies are able to craft stylish marketing strategies to reach children. It is the way that advertising and advertisers do many things, to make money. However in a lot of ways advertisements seem to be unethical, because children do not understand how bad the food could be for their short term and long term health.

Foods marketed to children are mostly high in sugar and fat, and as such are conflicting with national dietary recommendations. The results of promoting fast food, soft drinks, and candy to children can cause children to become overweight and unfit. Which have the negative social effects such as: bullying, lack of social skills, depression, hypertension and diabetes (Eberstadt). The Nemours Fondation states, that the percentage of “Overweight children in the United States are growing at an alarming rate, with 1 out of 3 kids now considered overweight or obese.” Our relationship with food as a country has hit extremes leaving our nation as the fattest nation in the world. We’ve forgotten the meaning of an appropriate meal and why children need to eat, to nurture their bodies, not to satisfy their desires.

The food marketing approach also includes television advertisements that advertise merchandise placements. Television commercials are generally promoting fast food and junk food. Which are used to have a certain appeal to children. According to Consumer Reports magazine, “Young children have difficulty distinguishing between advertising and reality in ads, and ads can distort their view of the world. Research has also shown that children between the ages of two and five cannot differentiate between regular TV programming and commercials”(American Psychological Association).

The marketing industry feeds off of children, exposing their vulnerability and distorting their values in order to pressure what they should eat. The advertising attacks show creativity on catching children’s attention and increase obesity that parents alone tend to be hopeless achieving power over the marketing experts. Marketers also promote junk foods on school campuses, kid’s social gatherings, such as clubs, and organizations. This has had a huge impact on how kids view foods today. Children Now states, that “Companies spend $15 billion a year on marketing to children under age 12, twice the amount spent just 10 years ago in an effort to cultivate nagging, insatiable, “cradle-to-grave” consumers” (Childeren Now).

Furthermore the way that marketers attract children with toys inside meals. This includes all the fast food advertisements that feature the most modern kid’s toy, one can get for free with a purchase of a burger meal or, other meals that include chocolates and sweets. There shouldn’t be a bias of which food type should be promoted the most. If at all the healthy foods should be advertised the most for the reason, that the healthiest foods would have a better benefit to the children’s well being. The American Psychological Association explains that,

“The food and beverage industry has resolved to self-regulate their marketing to children, but this has not resulted in significant improvement in the marketing of healthier food (i.e., fruits, vegetables, whole grains, low-fat or non-fat milk or dairy products, lean meats, poultry, fish, and beans) to children. Almost three out of every four foods advertised to children falls into the unhealthy categories that contribute to the obesity epidemic.”( American Psychological Association)

Fast food is not a drug, but can be compared to a drug that hurts the health of children and their lifestyle such as cigarettes. Nicotine is the one agent that keeps smokers addicted. And the way that fast food is American’s comfort food keeps them coming back. It is not the fast food chains fault for obesity but the matter of personal responsibility.

Children’s lack of self control to all of these media outputs puts them in an emotional attachment to food. If they are emotionally attached to anything they won’t want to get away from it. Like so many obese and overweight people, they need to be eating constantly, to reach their satisfaction. People who eat mindlessly tend to be overweight and can end up with serious health problems. Even though managing your diet doesn’t have to get as serious as counting calories, one should be sufficiently educated on what is healthy and unhealthy. Emotional attachment to a particular meal can be unhealthy especially if that meal is unhealthy, in most cases they are. The need for that comfort meal, especially if it is every day, can lead to tremendous health risks. Like a lot of people say “the more fat, the more flavor”, that is not the case. People need to explore other foods so they can actually see just because it is “deemed” healthy doesn’t make it disgusting.

Parents have important roles in protecting their kids from the advertisements, and in educating them at an early age. Kids are requesting specific brands of foods as soon as they can talk and parents that don’t find time to prepare them foods therefore they exploit children to fast food. Good nutrition is the answer for lifelong health, and it begins in childhood. Yet all too soon, kids are attacked by advertisements that work against parent efforts in regards to their health. Between peer pressure and the constant television commercials for junk foods, getting children to eat healthier might seem more pointless than productive. 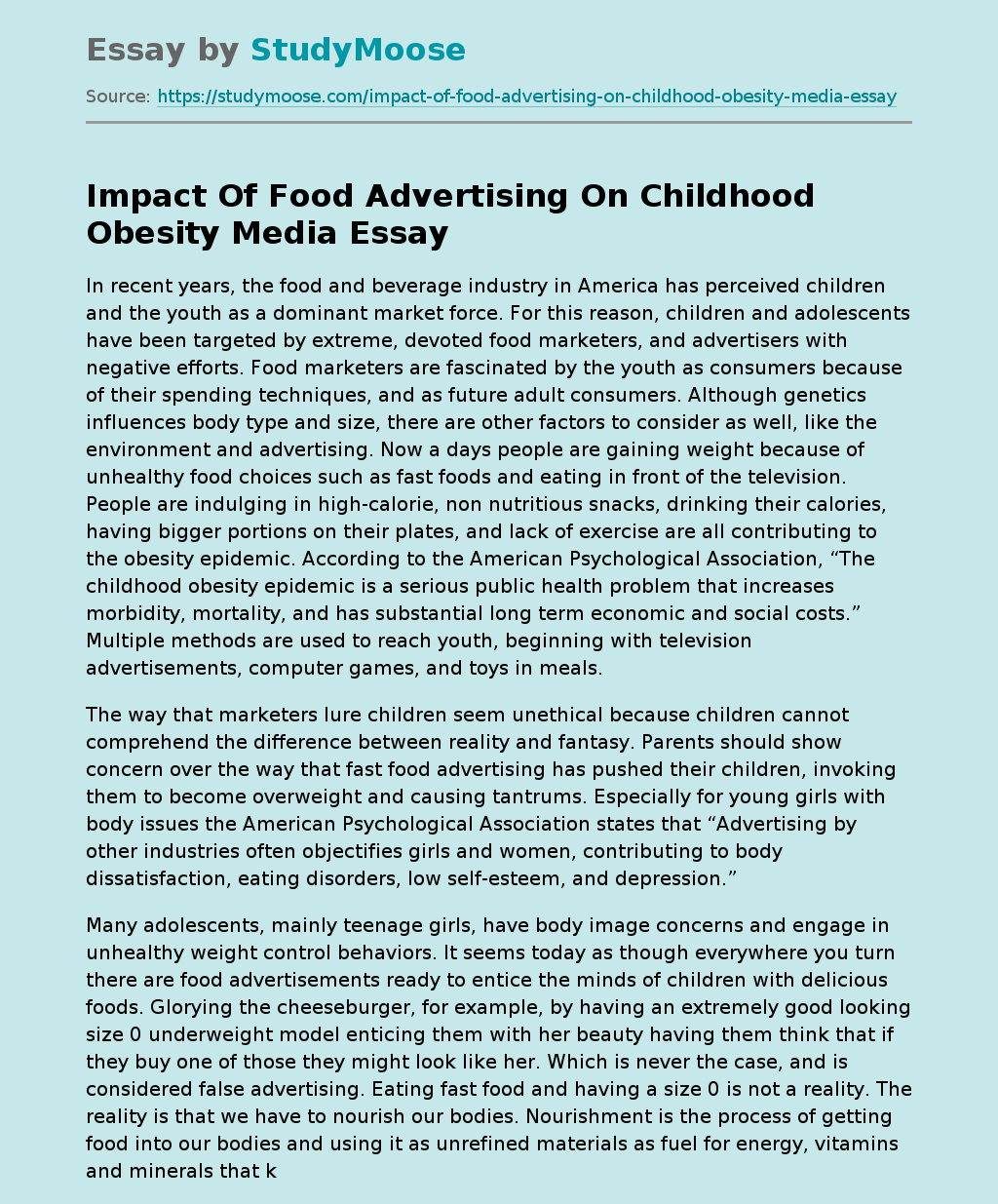