The Effects of Childhood Obesity In the UK

In the last few decades obesity has become a major issue not only in the Western World. According to the mass media, childhood obesity is a huge problem in the UK as well. When the amount of fats accumulated in a human body reaches an extra degree, it may have a negative impact on physical and mental health of a child. Moreover, being extremely fat can play really weird tricks on your health. In turn, such serious challenges may continue in the adulthood leading to high blood pressure, breathing difficulties, various heart diseases, and even diabetes.

Don't use plagiarized sources. Get your custom essay on
“ The Effects of Childhood Obesity In the UK ”
Get custom paper
NEW! smart matching with writer

Reasons of Obesity Among Children

It is widely considered that the most evident causes of becoming overweight are bad eating habits and lack of physical activity. Undoubtedly, poor and unhealthy nutrition along with sedentary lifestyle are the key reasons of obesity. But there is another side to the coin. In contrast, various genetic factors constitute the determinant aspect in some cases. Putting on extra weight might be caused by a special medical condition such as hormonal imbalance.

‘A physical exam and some blood tests can rule out the possibility of a medical condition as the cause for obesity’ (Obesity in Children, 2018). What is more, children from families with weight problems are more prone to become obese due to family eating habits and activity bahaviors whereas genetic predisposition plays inferior role in this case. Thus, the main risk factors include low levels of physical exercise as well as poor diet. Modern children are primarily coach-potatoes and prefer spending their free time in the internet instead of visiting a gym several times a week, for instance.

From the scientific point of view, disparity between the amount of consumed and expended calories is more likely to provoke obesity. Also, specialists especially note that women who gain excessive weight throughout pregnancy either way facilitate their future kids’ obesity. Evidence shows that maternal obesity has direct influence on the birth of babies above normal body weight: ‘in 2014, 58% of women of childbearing age (16 to 44 years) in England were either overweight or obese’ (Childhood obesity: applying All Our Health, 2015). These kids had a clear tendency to the subsequent development of obesity in later years.

There’s a plenty of reasons why people become overweight and thereby gain health problems. According to Public Health England figures for England and Wales, almost 60% more children were classified as ‘severely obese’ in their last year of primary school than in the first year. Hence, this survey has shown that children are gradually becoming overweight as they go through school. The annual research made by Public Health England is based on measuring children of four and five, and kids aged ten and eleven in the UK. But in 2018 the results of the study for the first time included a ‘severely obese’ category (Child obesity: Are 22,000 children ‘severely obese’? 2018).

Regarding childhood obesity the best method to determine this important issue is to compute the kid’s ‘BMI’, or the body mass index. Simply speaking, the essence of this technique is to measure weight and height value of the child considering his individual growth patterns and age and to compare to standard values. In brief, if a person is over a fixed weight for his height he will be considered overweight. This approach is nearly the most popular and widely used for years. On the other hand, if the child is under 18, his body is still in a process of continious growth. In such case, youngsters’ BMI is compared with heights and weights sample of other children of the same sex and age to get more precise results. In order to create a fixed point of comparison ‘Public Health England, which is responsible for overseeing national programmes on obesity, uses a measurement known as the UK90, which is based on the measurements of British children and young adults from nought to 23 years old collected between 1978 and 1994’ (Child obesity: Are 22,000 children ‘severely obese’? 2018). A case in this important issue is that all these measurments are ‘averages’ because individual development rates of every child are different – some personalities may gain weight before a growth spurt in height.

The Effects of Obesity on Individual and Society

Most of kids in the United Kingdom have fewer weight-related medical and health challenges than adults. Nevertheless, obese children are more prone to become overweight adolescents with high risk of developing of chronic heart and breathing disorders later in life. Besides, most children experience bullying from their mates due to their extra weight. As a matter of fact, obesity is closely related to precarious emotional state and general psychological health. Borne (2012) states that obesity carries a social stigma and certainly greatly affects personal identity.

It’s not a secret that overweight youngsters constantly face challenges to their emotions. This may be caused by repeated failure with dieting, rejection from friends, and even disparaging comments and offencing remarks from strangers. Respectively, fat youngsters are also especially vulnerable to feel particular distress, low self-esteem, and higher level of sadness. What’s more frightening, obese people have a higher risk of disability, morbidity and premature mortality in adulthood (Childhood obesity: applying All Our Health, 2015). In adulthood, obese persons often experience discrimination at work, and cannot enjoy bus seats, for example. Years of suffering from such disturbing effects of obesity might be accompanied by depression and anxiety as well. Seriously obese chidren greatly suffer from discrimination and tend to have a lower social status. In addition, there’s ‘a general societal belief that obesity is a consequence of a lack of self-discipline, or moral weakness’ (Health Effects of Morbid Obesity, 2007). For that reason, plenty of severely overweight people prefer to avoid social interactions or public places, choosing to limit their own freedom, rather than suffer embarassment.

Despite the scary statistics, most doctors espesially emphasize that even overweight people still need to use common sense. In other words, some children may gain extra fat which normally disappears as they get older because their bodies stretch and grow. During the period of adolescence young bodies undergo the largest amount of changes than in any other time of life. Therefore, children and adolescents should eat sensibly to gain the right amount of calories needed. ‘Most overweight children don’t need to diet, or even lose weight’ (Obesity in Children, 2007).

It is widely believed that the simplest and best way of maintaining a good weight is to adopt a healthy and balanced diet in a combination with regular physical exercise. Eating fruit and vegetables every day is of great importance. Moreover, parents should remember that little children should consume nearly five portions daily!

Many psychologists advise to replace the role junk food with an activity. Caring parents shouls interest their kids in a sport that they will enjoy. Besides, using encouragement instead of nagging is the best stimula for people losing weight. Finally, of all the influences that shape a child’s personality throughout the future life, his parents are the biggest ones. Setting an example of your own will inspire your kid to eat healthy and nutritious food, and exercise regularly. Living a healthy life is not only a pleasant thing. Time is such a thing you can’t ask to stop. Remember that exactly today it is a chance to start changing your future.

A number of studies has shown that majority of obese people consider themselves physically unattractive and unsuccessful, suffer from harsh comments about their weight, and therefore feel discriminated and avoid spending time in public places. From my point of view, obesity is an emerging problem nowadays but that’s not an accusation. All a person actually needs is love – love for himself and love for others. As soon as a person learns to perceive himself as he is, the other people will surely love him back.

The Effects of Childhood Obesity In the UK. (2021, Jan 28). Retrieved from https://studymoose.com/the-effects-of-childhood-obesity-in-the-uk-essay 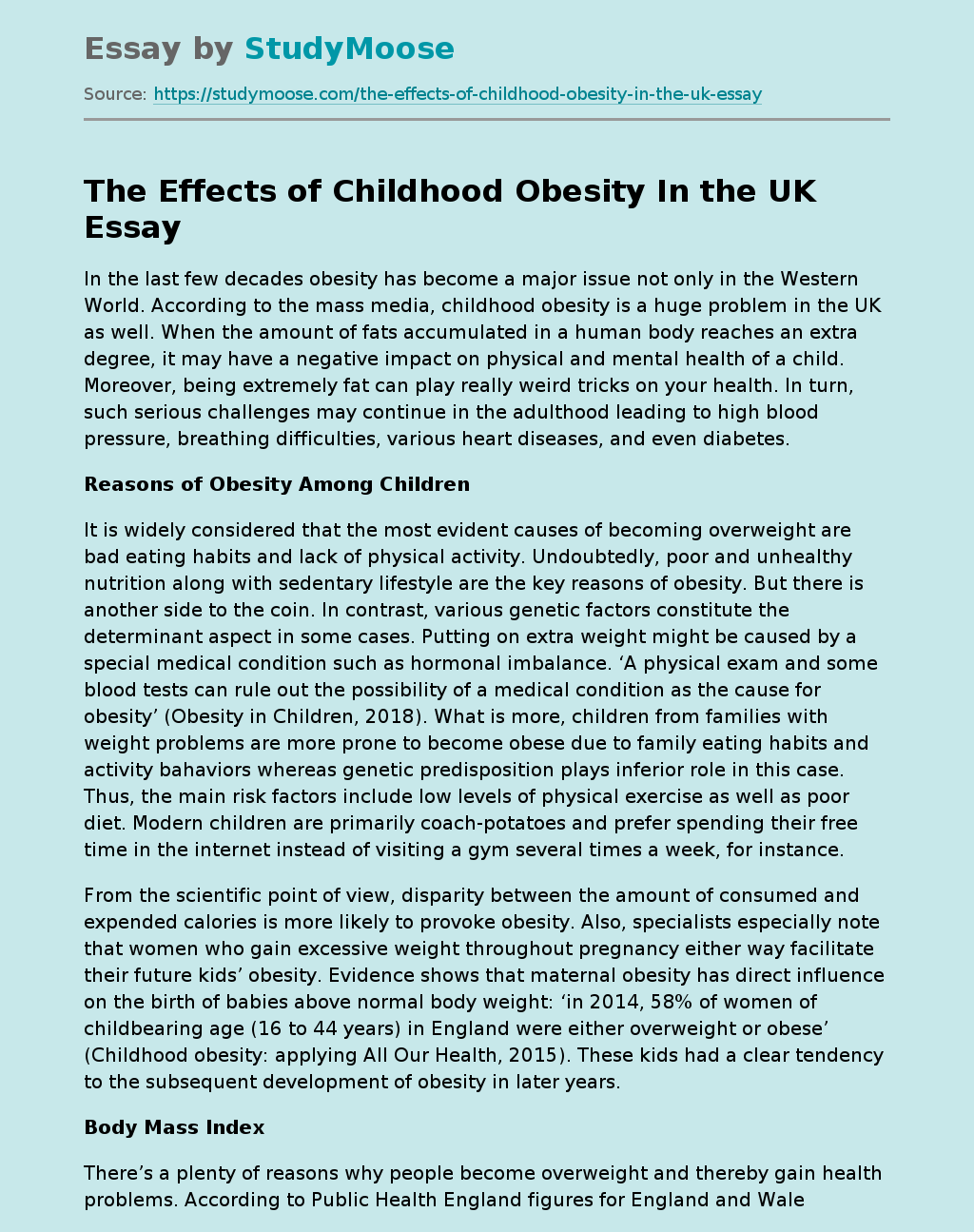