In America, fast food chains are a significant symbol of the American traditional food trends which expand widely and grow fast all over the world. Thus, a large number of Americans eat fast food as their daily diet. However, these tasty fast foods are highly processed foods which are filled with plenty of chemicals, additives and preservatives. By adding these additives and artificial flavorings into fast foods, so the food is attractive and also tasty.

Turn in your highest-quality paper
Get a qualified writer to help you with
“ Fast Food Contain Harmful Food Additives ”
Get high-quality paper
NEW! AI matching with writers

Many people do not realize the negative side of those unhealthy and processed fast food meals that contain lots of unsafe additives, which can lead to bad health effects and shorter life. For instance, all the burgers and beverages that people consume in the fast food restaurant are risky to people’s health because of food additives.

According to Fast Food Nation, “Without this flavor industry, today’s fast food industry could not exist” (Schlosser 120).

It is significant that artificial flavor is one essential element which use in the fast food industry and helps to operate fast food business successfully and permanently. After World War II, a vast flavor industry invented processed food that was popular and widely used by American. The flavor additives create more demand since it benefits both consumer and businessman in some ways.

For example, most food additives are cheap and functional so that companies are willing to buy and add it into food to reduce the cost of product and gain more business benefit.

Because of the low cost, the company is able to lower the price of fast food in order to appeal more customers to buy. As a result, many customers choose to consume more fast food in order to save money; Fast food companies added various chemical flavors and manufactured coloring additives into diverse foods and beverages. Chicken McNugget is one of the popular foods serviced in the McDonald meal.

The fair outward appearance, crispy skin and tender meat of Chicken McNuggets are a big part of what makes people feel more enjoyable to eat it. The chicken nugget is not simply a piece of fried chicken but more than that. So what is really in the chicken nuggets in McDonald? To answer this question, we might look at the great amount of ingredients of chicken nuggets. It is surprising to see that there are not only chicken but numerous other components which are almost unfamiliar with us, such as sodium aluminum phosphate, TBHQ and bleaching wheat flour.

Basically, this small piece of Chicken McNugget only has 50% of what is called the real chicken, and chemical and additives make up the other half. Many additional additives are used in Chicken McNuggets’ ingredient now, and I would show only a few of the most common ones here. First of all, sodium aluminum phosphate and sodium acid pyrophosphate are the primary components of a baking power as chemical leavening agents. They are food additives that are mostly and widely used in food industry for many baked products.

It accelerates food to yeast faster in order to save time, as well as affects the final texture, flavor and moisture of food. (Longe P43) Sodium aluminum phosphate is released slowly during the fermentation period, which “enhancing the properties of the formula ingredients”. (Leavening Agents) “Sodium acid pyrophosphate is also a slower reacting acid and is used in refrigerated biscuit dough recipe. ” (Longe P45) As a result, the product will have a crispy taste and fine texture. Likewise, McDonald Company adds these chemical materials into Chicken McNugget to make it taste better.

However, both of these agents are harmful to people’s health. For instance, Sodium Aluminum Phosphate is a toxic drug that could cause people’s mental problem, such as memory loss, and confusion. A direct possible consequence of eating these additive-containing foods frequently may lead to Alzheimer’s disease and osteoporosis. Second, “the most alarming ingredient in a Chicken McNugget is TBHQ, which is an anti-oxidant derived from petroleum that is either sprayed directly on the nugget for keeping its shelf time longer. (Pollan P113) Moreover, TBHQ helps the food to “maintain its freshness, minimize nutritional losses in edible oils, and preserve the present color of iron and metal complexes”. (Shree Additives) Obviously, the effective functions of TBHQ makes fast food industry often use this artificial additive in thousand food products.

Chicken McNuggets are just one of the fast foods that contain TBHQ. The result from consuming processing foods with TBHQ can lightly cause “nausea, vomiting, ringing in the ears, delirium, a sense of suffocation, and collapse. (Pollan P114) It can even lead to death if you ingest too much fast food with TBHQ. Last but not least, McNuggets also contain bleaching wheat flour which is one of the ingredients often used in McNugget and other productions. As we know, flour is used to improve the gluten baking quality. The food industry adds flour bleaching agent in order to make the product appear whiter and fresher. Also, the function of this agent is to maintain the foods’ stability, food color and improve the structure forming capacity, allowing the product produce higher proportions of gluten and sugar. Flour Bleaching Agent)

During the bleaching processing, most nutrients are destroyed and removed from the grain, and then produce amounts of alloxan. “The fact of alloxan is a product of the decomposition of uric acid which is used to produce diabetes in healthy experimental animals, so as to help researchers to study diabetes treatments in the lab. ” (The Little-Known Secrets about Bleaching Flour… ) It turns out that the nutritional value of food has been lost and we are actually eating the sugar what cause us fat and led to diabetes.

According to recent research, alloxan is also a poison which may lead to the country’s diabetes epidemic and other chronic diseases in America. Even though this bleaching agent has a great impact on food industry, we still cannot neglect the negative effect of this additive. Base on the ingredients in McNugget I mentioned above, it would be easy to think that McNugget as final product has been processed through many chemical mechanics and scientific methods which change the actual “meaning” of the chicken nugget.

In other words, it is hard to tell how much actual chicken goes into a real nugget. We have such tasty chicken nuggets available for us anytime because of these food additives. These nasty ingredients and harmful chemicals make people fat and cause serious illness or even death. Imagine how much chemicals and additives are contained in a little piece of Chicken McNugget that could easily endanger people’s health. So I wonder if other fast foods may contain the same dangerous or more harmful additives in its ingredient which lead to more health problems.

In conclusion, fast food chains play a vital role in the U. S’s health problems, people should to be up in arms with our government in order to fight against these hazardous chemicals to be used in fast food restaurants. Fast foods are rich in food additives that can badly affect people’s health as it cause cancer, nervous system damage, birth defects, and much more. From my point view, I think that we should avoid the fast food, and especially the overconsumption of fast food, in order to pursue a healthy life style. 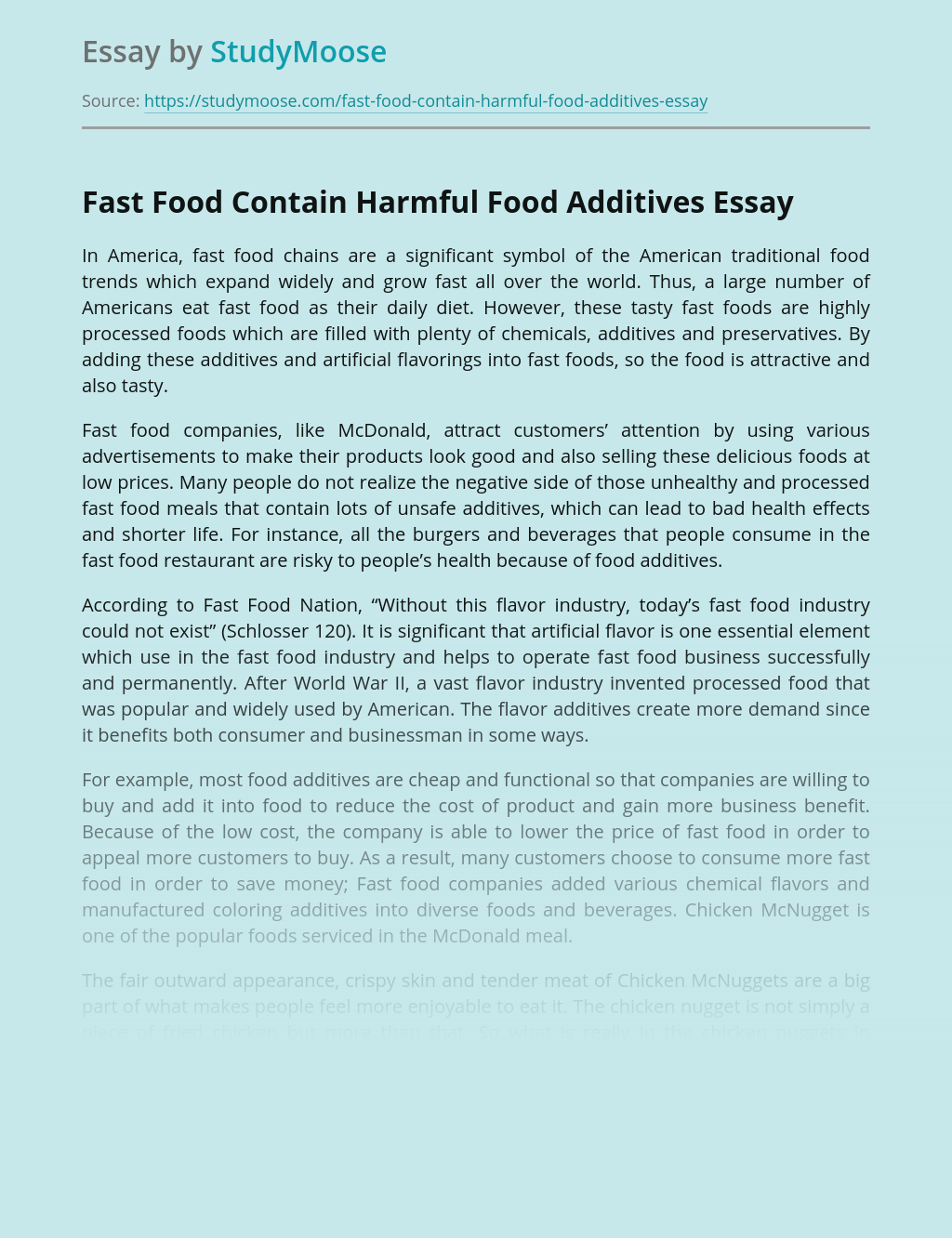 Turn in your highest-quality paper
Get a qualified writer to help you with
“ Fast Food Contain Harmful Food Additives ”
Get high-quality paper
Helping students since 2015
Stay Safe, Stay Original