Smoking And Its Harmful Effects On Our Society

Smoking is destroying our society, the earth, and is killing people. Cigarettes are sold all around the world and people are paying to kill themselves. Smoking is dangerous. People smoke because of peer pressure, media, and the environment that they are raised in

Peer pressure causes people to smoke sometimes. Some people view themselves as “uncool” because they don’t smoke. Also sometimes when they see they’re peers smoking, they think that it will connect them or bond them. There are also people who pressure someone into smoking either by threatening or persuading them to think that it’s “cool” to smoke.

Don't use plagiarized sources. Get your custom essay on
“ Smoking And Its Harmful Effects On Our Society ”
Get custom paper
NEW! smart matching with writer

But peer pressure doesn’t cause it all, media also causes people to smoke.

The media like movies, tv shows, and social media can also convince people to smoke. When someone sees the main protagonist in a show or movie, maybe they like that character a lot and want to be like them, well if that character smokes it may convince them to smoke.

on social media if someone that they “follow”, if they smoke and the person who follows them likes them or looks up to them, that can also convince them into smoking. If they have a friend that posts on social media a lot, they may want to think that their friend is “cool” because of the stuff he posts, and if he posts a picture of him smoking maybe they will think it’s “cool” and this can also convince them to smoke. Many people can easily be convinced into smoking because of all the media because they think it’s “cool” but it will hurt them more than help.

In certain environments that people are raised in can lead people to smoke as well. At a young age if parents or other family members smoke, at young age children could be convinced by their family members to smoke either because they’re so used to it and then they try a cigarette, or maybe even a family member could even offer a child a cigarette. A child could also be exposed to the smoke and that could lead to them smoking. Especially in low-income environments, where the prices for cigarettes are lower and when they smoke around the children it can lead to them try cigarettes then it will just escalate from there. People need to be more aware if they’re near kids while smoking because they can end up harming kids and maybe even convincing them to smoke.

Whether it’s the media, peer pressure, or the environment people are raised in, it’s still very dangerous to smoke, it can cause cancer, it damages your lungs every time you smoke, and it harms everyone around them.

Smoking And Its Harmful Effects On Our Society. (2021, Apr 16). Retrieved from http://studymoose.com/smoking-and-its-harmful-effects-on-our-society-essay 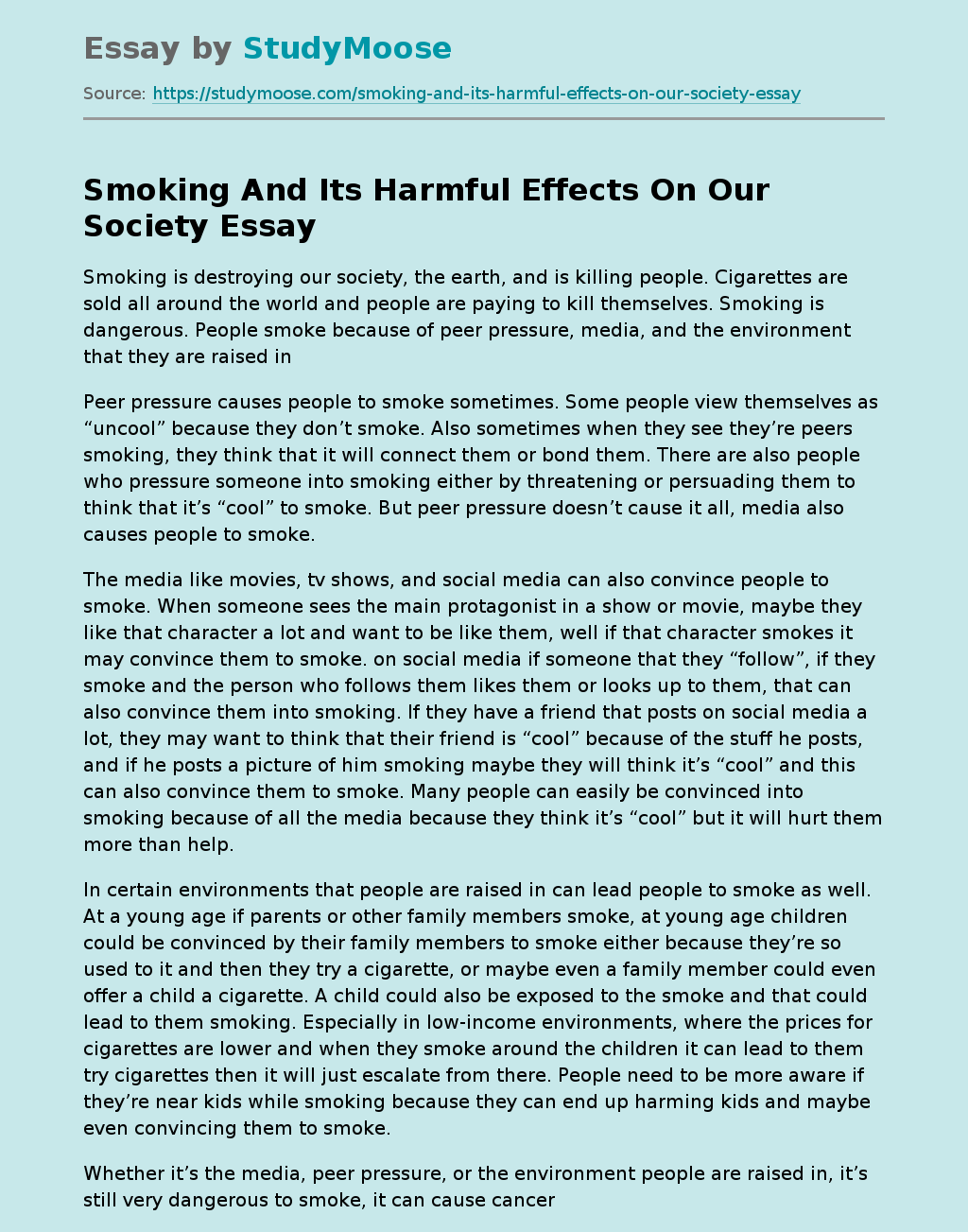