Labeling theory and its effects to the society

Labeling theory is a theory that tries to explain the effects of “labeling” by the society on an individual. It shows that: by labeling an individual for example as insane, that could mark the beginning of the process of him being insane. It is therefore important for society to be careful on the labels that they give to individuals because of the effects that are likely to come with this “labels”. This paper is going to look into the components of labeling theory and its effects.

Don't use plagiarized sources. Get your custom essay on
“ Labeling theory and its effects to the society ”
Get custom paper
NEW! smart matching with writer

Labeling Theory Labeling theory looks at the influence that the society has on the development of a certain behavior by an individual because of the society’s perception of him/her. The way an individual has been described and categorized by the public can greatly affect the behavior of the said individual. It also brings out the linguistic tendency of the majority in society to label those who are perceived to be minority or with behaviors different from the rest, negative labels.

According to this theory, the stigmatizing or negative labels given to these individuals have a significant effect on them such that some of the individuals may proceed to being deviant (Becker, 1964). An example is an individual who is perceived to be a drug addict. Even if the drugs do not affects his professional life, when individuals whom they work with come to know that they use drugs, they may start avoiding and associating them with all other crimes that are done by drug addicts.

Because of this stigmatization, the individual may end up loosing the job and could not be able to secure a decent job in any other place. This will leave him with no other option other than involving in crime for survival, something which he could not have gotten himself in were it not for stigmatization and labels that were directed to him/her (Becker, 1963). According to Becker (1963), the process of labeling cannot be assumed to be purely right because if so, it could have not considered the general rule of deviance which is: it is the society that creates it.

The society may create some social rules and apply them to some given individuals without proper consideration. Their claims cannot be justified because there is a possibility that the individual may not be what the society perceives him/her to be. Other offenders may be lucky to go without being noticed by people and you cannot say that just because they were able to escape unseen, they are clean and cannot qualify to be deviant or those who have been labeled are all the same.

This is because there may be false accusations. The theory may affect the society in many ways. It may lead to increased crime rate among individuals and society. This is because of the effect that the theory has on an individual like in the example above of a drug addict who will be forced to engage in dangerous activities because of discrimination by the people around him/her.

It may also serve as an example to other individuals to avoid committing crimes considering the condemnation involved after carrying out the crime (Becker, 1964). Victims of this theory can also become victims of self fulfilled prophesy. Because of the perception that the society has on these individuals, they may begin to change their behavior to that which the society has labeled them to have either consciously or unconsciously. An example is a homosexual individual.

Being a homosexual may not have an effect on an individual’s professional life, but if his colleagues become aware of that fact, it may be difficult for the said person to comfortably work therefore his work will also suffer as a result. Poor results in the work place have been brought about by discrimination that an individual has received from his colleagues because of the label of a “homosexual” that he had acquired. Although the individuals may be determined to do things right, it may be difficult to abide by that (Becker, 1963).

Although this theory may bring about positive influences in society such that others may learn from victims, it makes victims to be more deviant. This could be because of lack of support from the individuals around the victims making life more unbearable for them pushing them further into crime. References Becker, H. S. (1963). Outsiders: labeling theory. New York, NY: The Free Press Becker, H. S. (1964). The Other Side: Perspectives on Deviance. New York, NY: The Free Press

Labeling theory and its effects to the society. (2016, Sep 22). Retrieved from https://studymoose.com/labeling-theory-and-its-effects-to-the-society-essay 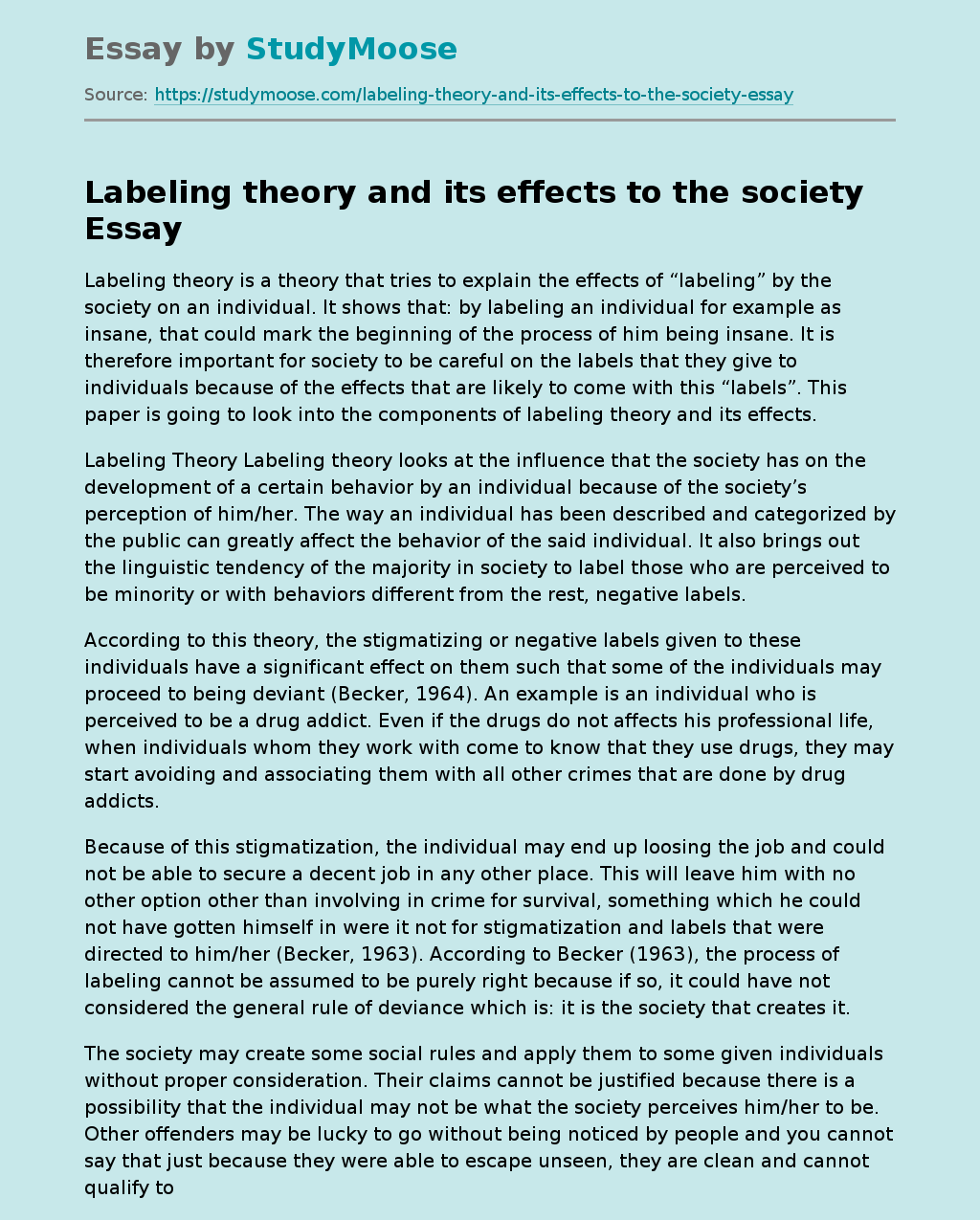