The trend of carrying and consuming water bottles has expenditly increased in recent years, and its popularity has hit an alltime peak. More and more people are using bottled water because of its easy assecability, and its conveince. Unaware to most, the useage of bottled water has dire effects on the environment, and itself can provide several health risks. Although bottled water can serve as a great convience, the harm it causes to the environment outweights its convience immensly and contrary to popular belief, bottled water is often no healthier than tap water.

Don't use plagiarized sources. Get your custom essay on
“ Harm of Bottled Water ”
Get custom paper
NEW! smart matching with writer

Despite perceptions that bottled water is healthier than tap water, more times than not, it is not amd bottled water has much more lienant rules when it comes to regulating their water. “Bottled water may be no safer, or healthier, than tap water in many countries while selling for up to 1,000 times the price,” the World Wildlife Fund said. Bottled water continues to increase its revenue, and is the fastest growing beverage industry in the world, worth up to $22 billion a year.

More than half of all Americans drink bottled water, and about a third of the public consumers bottled water on a regular basis. The increased sale of bottled water has been fueled by ads on television or in magazines of luxurious mountains and beauitful glaciers with cyrstal clear springs flowing with the so called “purified water.” In reality tho, bottled water is not necessarily regulated better or safer than most tap water. The marketing of bottled water is often misleading, implying that water comes from pure springs, when it does not.

According to government and industry estmates, about one fourth of botled water is bottled tap water, which is by some accounts as much as fourty percent tap water. The FDA’s rules exepmt 60-70 percent of the bottled water that is sold in the United States from the bottled water standards, because FDA said ” Its rules do not apply to water packed and sold within the same state.” The FDA (Food and Drug Administration) is responsible for protecting and promoting public health through the regulation and supervision of food safety, tobacco products, dietary supplements, etc. The FDA also expmets carbonated water and many other waters sold in bottles from its bottled water standards, only applying a vague sanitation rule that failed to set any specific contamination limits.

Contrary to popular belief, the FDA’s rules are weaker in many ways than EPA (Environmental Protection Agency) rules that apply to tap water. The EPA is responsible for protecting human health and the environment by writing and enforcing regulations passed by Congress, and it oversees specially big city tap water. Due to bottled water companies not follwing EPA rules and regulations, their water can be more harmful than tap water. For instance, city tap water can contain no E. coli or fecal coliform bacteria, bacteria that serve as indicators of contamination. The FDA follows no such rule and a certain amount of any type of bacteria is allowed in tap water. Bottled water plants must test for coliform bacteria just once a week, as big city tap water must be tested more 100 times a month.

City tap water must meet standards for certain important toxic chemicals such as phthalate, which can come from plastic, including water bottles. On the other hand, bottled water is also exempt from follwoing this rule. Also, cities must test at least once every four months for many chemical contaminants, water bottlers generally must test only annually. Cities must have their water tested by government-certified labs; such certified testing is not required for bottled water. Although bottled water on the surface appeasr to be healthier to drink, it is quite the opposite and stricter rules for the regulation of bottled water should be placed to ensure the safety their consumers.

People around the world believe that water is clearner and safer to drink than tap water. This has resulted into a multi-billion industry of retailing bottled water, but consequently leads to millions of water bottles being produced every year. Although these water bottles are recycable, it is not smart to recycle these plastics die to the chemical componets that manufacture them. As a result of mass producing these water bottles, it has a serious effect on the environme and millions of empty water bottles end up in landfills every year. One of the harmful effects it has on the environment is it can cause soil contamination as time passes on, and this is mainly due to the chemical the bottle is made up with. These chemicals contaminate the soil and as a result, can also affect the surrounding plant’s grwoth because of the contamination.

“In addition, ground water may end up sinling deeper into the ground and ultimately reaching the ground water reservoir, meaning that natural water resources are being wasted due to the disposal of these water bottles.” exclaimed Joe Hartz. Production of plastic used for water bottles take a lot of energy and resources which can also have negative effects on the environment. Professor Alan Hunt said “Since there is more power requirements for production means more fossil fuel is potentially used to achieve the production of water bottles. This can lead to heavily draining of fossil fuel resources. Add to that the fact that more energy and resources are needed from production to post production of these water bottles which can be considered as a waste of limited energy resources.” Another harmful way water bottles hurt the environment is emit pollutants and as a direct result make the air more hamrful to breathe.

The industrial plants in which these water bottles are being made also produce other harmful wastes that are harmful to the environment. Bottled water produces up to 1.5 million tons of plastic waste per year. According to Food and Water Watch,”plastic requires up to 47 million gallons of oil per year to produce. And while the plastic used to bottle beverages is of high quality and in demand by recyclers.” Also, recent studies have shown The Plastics Symbol no. 7 is a recent concern worldwide on discovery that large numbers of no.7 plastics are made with Polycarbonate plastic which, experimentally were found to leach bisphenol A.”This chemical is a known hormonal disruptor causing miscarriages and birth defects” according to a study conducted by Case Western Reserve scientists.

Although bottled water serves as a great convience, there is many cheap and effective alternatives to carry water and stop the production of water bottles. One way is to buy a distiller or filter to use at home. Distillers are very effective at reducing the levels of most chemicals, except organic chemicals. The distiller boils the water and condenses the steam, removing any contaminants and most chemicals in the process. Filters also serve as a great alternative to bottled water, as it traps particles in a porous material while allowing water to pass through. In this process, it is reducing particles like sand and rust. Although drinking water in the vast majority of homes meets the Environmental Protection Agency’s standards for quality, some homeowners use point-of-use water filtration systems to help reduce certain contaminants.

Most typically, carbon filters are installed on faucets or used in pitchers or bottles. Filter devices are relatively inexpensive and the now clean and purified water can be put into a reuseable stainless steel or aluminum water bottle. These reusable bottles are a cheap alternative and puts back the ease, comfort, and convience of a water bottle but without hurting the environemnt in any way. Another way to help prevent bottled water hurting the environment is making it into a deposit. In doing this, it would encourage more people to recycle the water bottles, as only 20 percent of people currently recycle the water bottles. This would help dramtically cut back on water bottles being put into a landfill, and ultimately saving the environment also and putting money back into the consumer’s pocket.

All these alternatives are act as a great alternative, as they do not harm the environemnt, and in the long run actually save the consumer money. Not only does an in-home filter or distiller only censt ten cents a gallon, it also provides a safer taste than bottled water. Some colleges are starting to take note of this, as bottled water is trickling away from college campuses nationwide, due to the effort of passionate students and non-profits groups. In addition to removing bottled water from vending machines, stores and cafeterias, students have pushed for reusable bottle hand-outs, water fountains, and filling stations. “We’re really trying to make it part of the student culture to carry a water bottle,” says Clare Pillsbury, a Senior at Macalester.

In conclusion, recent studies have shown the harm and the uncleainess of bottled water simply does not outweight its convience. There are many other alternatives that provide cleaner and healthier water than bottled water does. These alternatives also do not harm the environment, and in the long run actually save the consumer money and better circualate the economy. Filtered water or distilled water provide the consumer with a more than adequate source of water,and at this point and time, there is no better choice for purity and a more economically safer choice than filtered tap water. 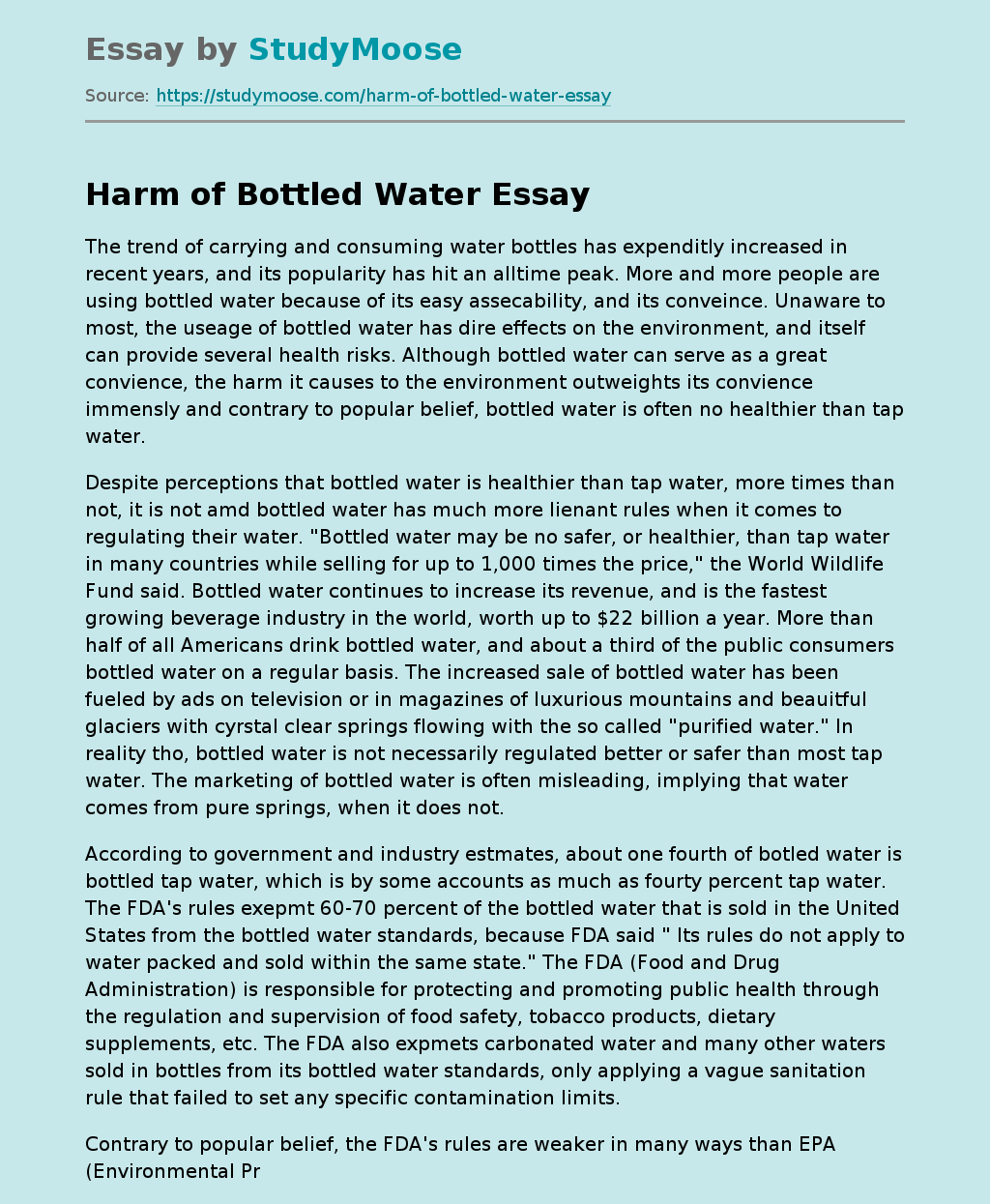