Standard pieces of equipment in most homes, watching television has become a standard activity for most families. Although there are many excellent programs, many people think television is one of the worst inventions of modern times. All too often, television is harmful because of the shows it broadcasts, the effect it has on people, and the way it is used in homes.

Don't use plagiarized sources. Get your custom essay on
“ Television is harmful Essay ”
Get custom paper
NEW! smart matching with writer

More time spent watching these shows is linked with poorer school performance overall and decreased scores on standardized tests. The more time spent in front of a television, the less time spent on homework or had stimulating interactions with adults or other children, “On average, children aged 2-5 watch 14 hours of network television, per week” (Television project).

This fact is further supported by a report in CNN news quoting the latest annual Media in the Home survey, conducted by the Annenberg Public Policy Center that “The average child in the United States spends about 25 hours a week in front of the television (including the use of VCR)”, and “By grade 12, the average American child will have spent more time watching television than they did sitting in classrooms kindergarten through high school!” (Television Can Be Harmful).

In addition, late-night TV watching tires kids out so that they can not pay attention in school. Television also hands kids all the answers, promoting passive learning and short attention spans.

As a result, kids have difficulty concentrating and working hard to solve a problem.

Second, heavy TV viewing, heavy kids. There appears to be a strong relationship between time spent in front of the television and being overweigh. “This past March the American Medical Association held a special briefing in New York City to alert parents about the well-proven link between TV viewing and obesity”(CNN news). While watching television, people usually eat something such as, potato, chocolate which cause couch-potato syndrome. This is probably the result of taking in too many calories (junk food — which is advertised on television — stuffed in unconsciously as kids stare at the screen) and not burning up enough calories (sitting still rather than running around and playing), “66% of Americans eat dinner while watching television” (Television Project).

Third, late-night television causes daytime sleepiness, Daphne Miller, M.D. ” TV watching (especially late-night and violent shows) has been connected with poor sleep patterns in children. The emotional stress caused by the shows could be preventing children from getting to sleep and cause nightmares”. In turn, abnormal sleep patterns can cause children to be less alert during the day, also contributing to poor school performance.

Moreover, most family arguments revolve around who wants to watch what and when and sadly they never agree and what happens? Children tend to leave the room and find something else to do while the dad watches the football game. Television has been one of the successful destroyers of what we once knew as a happy family. Children watch actors argue with their parents, leave the house and even harm their families. So what is TV really doing to our families and the people we love the most? It is making us grow apart.

Television is designed to make you miserable. Especially commercials are written to make viewers unhappy with their life. Their goal is to make to discontent and miserable so that you will buy whatever they are selling. Television, particularly commercials, is built on greed and promoting jealousy. No wonder kids have to have the things they see on television, “When shopping with a parent, on average, children request a brand-named item 13-18 times” (Television project). Television parades before us and our children everything we do not have – money, pleasure, fame, power, and makes us feel we are missing out. Television displays the unusual as “normal.” The “normal” is boring – and so the abnormal becomes the norm in television. Let’s consider the future according to television and movies.

Think of any movies you have seen or heard about that involve the future. What kind of future is portrayed? For instance, Independence Day – the world is attacked and almost annihilated by aliens, Water World – the world is flooded and the few survivors are floating around fighting each other, Starship Troopers – the world is attacked by bugs on another planet, Peace Maker / True Lies and many more – terrorists are about to destroy America or world. Is it any wonder that most kids do not think that the future is bright? Movies and television have such an emphasis on the dark side of life that hope is extinguished.

Passive brains retain sensations, not information. There is no other experience in a child’s life that permits so much passive intake while demanding so little active outflow as the experience of watching television. According to Jane Healy, PhD,

“It is well documented that heavy television watching has strong negative effects on the reading skills needed for high-level comprehension. It is not the content so much as the experience itself, and the experiences missed while watching, that pose serious dangers to the actual physiological development of a child’s brain. Studies show that there is a direct inverse relationship between viewing time and performance on tests of language development: the children who viewed more television demonstrated lower language levels, regardless of the content watched. And it’s a given that language skills left undeveloped, or under-developed, can not help but affect a child’s ability to learn in later life because our entire system of education is based upon using language skills to learn other things.”

Television increases violent effect. Although most people look at television as an entertaining and educational way to spend time, there is too much violence in television and that is influencing our young into becoming aggressive in nature and to tolerate violence, “Commercial television for children is 50 to 60 times more violent than prime time programs for adults. Some cartoons average over 80 violent acts per hour”(Children Defense Fund – Media Violence). Now scientists have discovered that all the violence in television can in fact mold a young innocent person into becoming a monster right under our eyes, just by watching television,

“The typical American child watches 28 hours of television a week and by the age of 18 will have seen 16,000 simulated murders and 200,000 acts of violence [..] Two surveys of young American male violent felons found that 22-34 percent had imitated crime techniques they watched on television programs”(Media Violence).

Furthermore, most of the shows on television, including cartoons, are non-educational. Tom and Jerry, for example, includes more violence than most movies. We do not see blood but the violence still exists in a different form. Take a flattened cat, a “broken” mouse, a ran over dog or even a blown up coyote, these are not particularly very nice scenes for children, although they find them funny.

Reality is that this humor might lead them to try everything they see on T.V, since “Children under the age of 5 cannot separate fact from fantasy”(The Television Project). Centerwall (1989, 19930) analyzed crime data in areas of the world with and without television and made comparisons in areas before and after the introduction of TV “homicide rates doubled in ten to fifteen years after TV was introduced for the first time into specified areas of the United States and Canada.”

In conclusion, although there are many disadvantages of television, I think it is exaggerative to say, “Television is the worst invention of modern times.” Television is a machine, a form of entertainment and communication. Disadvantages or advantages are relied on people, the viewer. Programs should be regulated and parents should monitor their children until they are mature enough to choose for themselves. Families should spend more time together doing different activities that do not include watching T.V or any other movies. Television is an important form of communication but as everything else is it has its disadvantages and we should learn to work our way around them.

“« Daphne Miller, M.D. “Television’s effects on kids: It can be harmful” http://www.CNN.com

VIOLENCE touches THE LIVES of too MANY CHILDREN. HELP Stop the VIOLENCE. 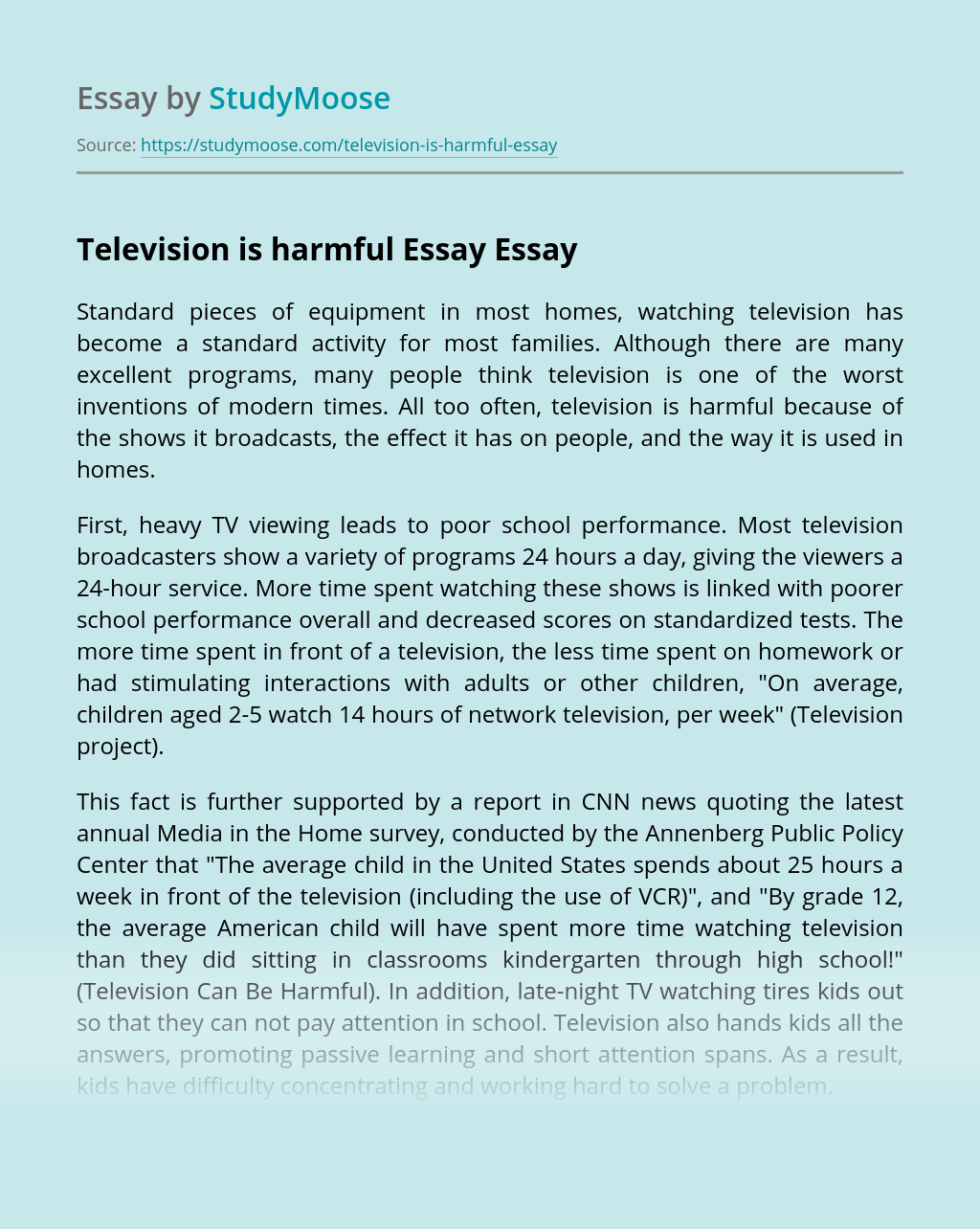