Game shows were dwindling down and were a thing of the past, but recently they have been making a sharp comeback. Television entertainment is now being focused on game shows such as “Twenty-One,” “Greed,” and “Who Wants to Be a Millionaire. ” I for one am obsessed with these new shows on television. They bring the fun back into television and makes people want to win. In the pages following, many facts, reactions from the public and comparison’s to other game shows will be discussed as they relate to the recent popularity of the game shows.

Don't use plagiarized sources. Get your custom essay on
“ Game shows on television ”
Get custom paper
NEW! smart matching with writer

As a result of the increase in game shows, there is a greater quality that is brought back into television for the audience. New values and creativity have been sparked by the demand for these game shows. Regis Philbin, host of “Who Wants to Be a Millionaire,” has started this game show craze off with a bang. The first five airings of his show averaged nearly 29 million viewers (Bauder, “ABC’s Game Show”).

In January, “Who Wants to Be a Millionaire” averaged an extra 5 million viewers than it did in November (Bauder, “ABC’s Game Show”).

In fact, this craze sure doesn’t show any signs of slowing down. Host Regis Philbin knows how well it is doing because he is looking at getting a raise, at least two times the amount he is making now. Philbin is currently accepting a $100,000 paycheck for each episode of “Millionaire” that airs, which is currently three times a week.

He wants to double his income so he will shortly be looking at around $20 million a season. His income is already up in the same range as movie stars Tom Cruise, Mel Gibson, and Jim Carrey (Sikles).

Host Philbin is able to make such a big salary because the game shows do not cost much to produce. They are much cheaper to produce than sitcoms and dramas (Consoli). Since these shows have become so popular, television stations would be crazy not to produce them. “Millionaire” was the first game show that led to all of the major networks creating their own version of an interactive game show. As a result, some stations are getting better ratings off of these popular game shows than they do from their regular weekly dramas.

The game shows have gotten positive feedback by bringing families closer together. Families have said they now feel as if there is a common ground between them and their teenagers. Bauder goes on to explain, “Experts say it has revived the concept of families watching TV together after a decade’s worth of forces pulling them apart” (Bauder, “Millionaire”). Parents have stated that instead of everyone going to their own separate rooms to watch television shows made for their age range, everyone gets to play along with shows such as “Who Wants to Be a Millionaire. With the questions ranging from easy to difficult it gives everyone a chance to play along at their own intelligence level. Four-year old Walker was especially delighted when he correctly completed the name of the children’s game “Duck-Duck Goose” (Bauder, “Millionaire”). Although many people say they have watched more television than normal since these shows have started, it is said not to be a bad thing. “It’s fun to be able to actually enjoy something together” (McKinney qtd. in Bauder, “Millionaire”).

Another reason parents like watching “Millionaire” with their sons and daughters is because it stimulates conversation. By watching these shows they have something to talk about with their kids; in some cases they feel this is an easier way to bring up some “harder to talk about” topics (Bauder, “Millionaire”). With this big break in bringing families together, NBC’s top entertainment executives have said that establishing new family shows are their top development priority. The public has reacted toward these shows tremendously because they contain questions in which the average person knows the answer to.

My whole apartment got so excited the first time we watched someone get the million dollars, I can’t imagine how the winner felt. The game shows are exciting and are interactive for everyone. There is a sense of addiction to these game shows because of the drama and suspense, which is why they are so successful. Great Britain who originated “Millionaire” was upset with the United States’ version of the game show because the questions on America’s version were not very difficult. Great Britain creators thought the questions in the newer version should raise in difficulty.

Britain’s creators were unhappy and were thinking about filing a lawsuit. Another show that is being imported from Sweden is getting ready to air in the United States this summer. This show will be on CBS and is called “Survivor. ” It will take 16 contestants and drop them off on a deserted Malaysian Island with camera crews following them. Every three days the players will vote to expel one of the members of their group until there are only two contestants left. Then all the players except for the two left on the island will be able to choose which contestant they want to walk away with the $1 million dollar prize.

The contestant with the majority votes wins. Internationally, game shows are also in demand and in popularity. In comparison with the game shows from Great Britain, United States’ has it easy. The shows in which viewers are drawn from Great Britain are much harsher. Their quiz questions are much tougher and their contestants have to be more daring in some cases. In one game show in Great Britain, people go on the show to face their biggest fears. They work as a team and each member has to do something that frightens them.

For example, one contestant was scared of spiders and she had to get a clue for her team off of the back of a tarantula. In this case she never ended up getting it because it terrified her too much. Her teammates were hurt overall. Another example of a game show from Great Britain involves contestants getting hooked up to a bungee cord and then they jump from a high bridge. While in the air, they have to throw a ball into a Santa’s hat in the water. If the contestant successfully gets the ball in the Santa’s hat then that person wins. It is apparently a tough thing to do because not many people end up winning.

Who Wants to Be a Millionaire” is definitely breeding new shows in the United States. “Millionaire” is creating theme shows, by having football focused questions around the time of the Superbowl and movie-themed questions around the time of the Academy Awards. This has proved to be highly successful and more exciting and fun for the viewers (Bauder, “ABC Takes Lead). The success of “Millionaire” has led to other stations providing the same type of entertainment to their viewers. “Greed” has become a big game show since it aired shortly after “Millionaire” got high ratings.

This show has a $2 million jackpot and gives its contestants the opportunity to challenge their other teammates if chosen by the terminator. Although one wrong answer from any team member is all it takes to lose the $2 million for the team makes this show more difficult to win the jackpot. The television game show “Twenty-One” has also been revived from the 1950’s. Being taken off the air years ago due to some scandals, NBC has brought it back and it has regained itself in the television market (Gray). Other game shows in the works of coming back on the air is “The $64,000 Question” and possibly “What’s My Line” by CBS (Gray).

I believe these shows might be able to make it for awhile as long as the TV station can dish out what the audience demands of them. Once the viewers have had enough of the craze, then these game shows will most likely go off the air for another fifty years or so until they get revived again by another curious generation who wants to win big. Next time, the stakes will most likely be higher than $1 million and they will raise the curiosity and greed of the fresh viewing audience. Personally, I would like to see many more game shows on the air because they are very exciting and fun to watch. 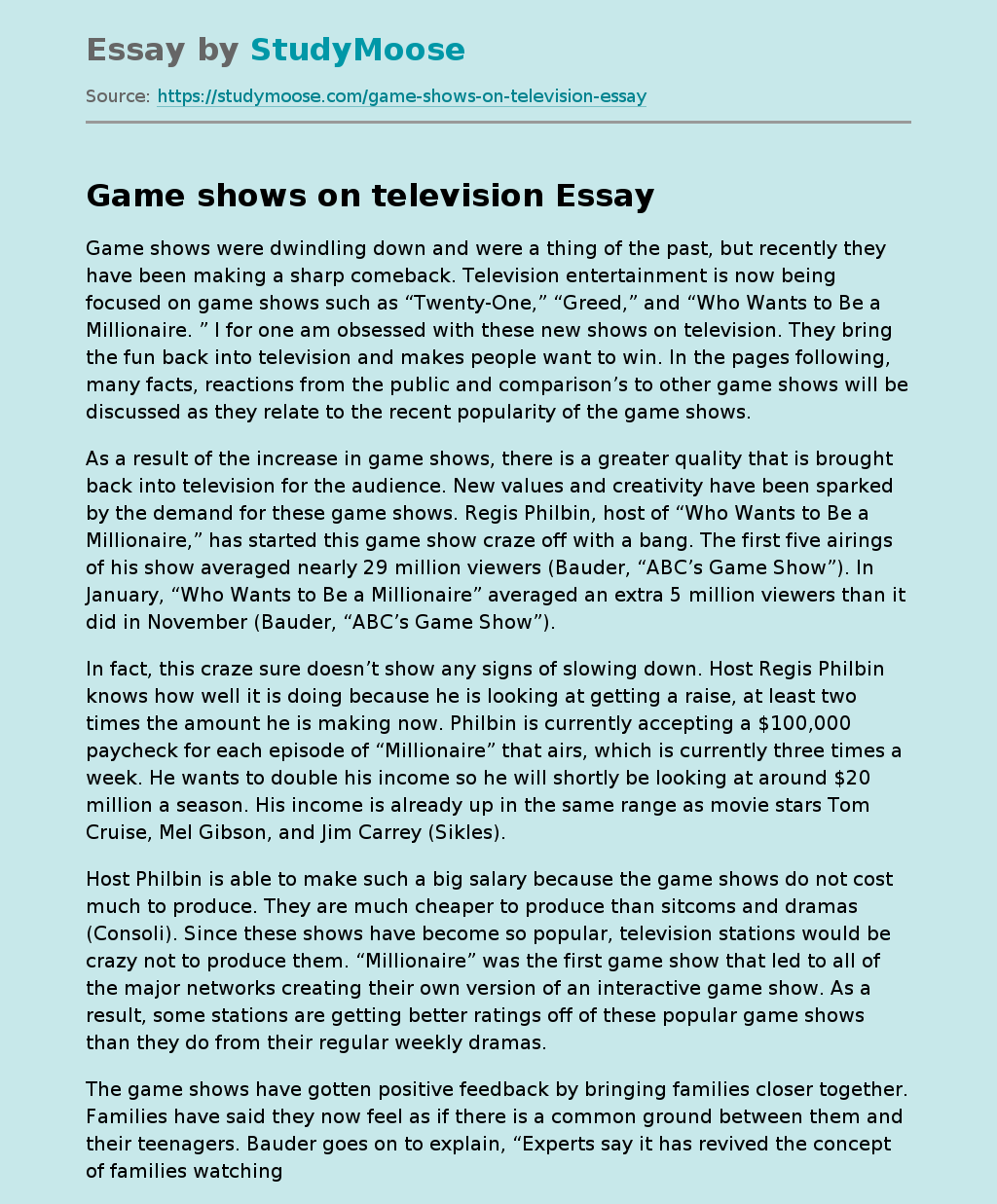