Many sociologists have studied the influence of television on kids and teens, and they indicated television programs have significant, negative impacts to them. The research have showed young people spend an average of 24.6 hours (Data from News.bbc.co.uk, 2014) watching television every week, and the reports also emphasize TV programs they watch includes a vast amount of embedded advertisements. Since the young generations can easily learn from what they see and hear, they end up imitating celebrities without much thought.

Don't use plagiarized sources. Get your custom essay on
“ Negative Effect of Media – Television ”
Get custom paper
NEW! smart matching with writer

Television does affect youths’ lives, and it does influence their behavior. Studies show that “Kids who watched two or more hours of TV daily were more likely to suffer from sleep, attention and aggressive behavior problems, and externalizing of problem behaviors. (News, 2014)” In 2702 family surveys, researched by Madeline A. Dalton, director of the Hood Center for Families and Children at Dartmouth Medical School, watching television causes youths to have violent tendencies, hesitation, irresponsible sexual behaviors, and problems of dealing with others.

For kids and teenagers, a short clip can be worth a thousand words for them, which means they experience certain attitudes and actions and imitate directly. Those mirrored attitudes and actions can be really bad depending on what they watch. Research not only proves that watching television has strong effect on youths’ behavior, and it also shows youths try to imitate negative role models from TV.

When youths try to imitate their role models from the glamor industry, they do not have any ideas for whether they are doing right or wrong. Research done by Common Sense Media takes a look at all popular characters and have the 10 worst role models that influence kids and teens by leading them for making decisions without appropriate behaviors. For example, June, who participated in Here Comes Honey Boo Boo, exploits her family. “While June’s messages of self-acceptance are fine, her decision to offer up her family members as examples of uncouth, uneducated, unwashed country dwellers reinforces negative stereotypes and turns them into the butt of America’s joke. (Commonsensemedia.org, 2014)”

More, Ravi, one of the actors in Jessie, reinforces cultural stereotypes. “Great Ganesh! I’m a human samosa! You have aroused my ire! (Commonsensemedia.org, 2014)” These phrases can be funny but only when you are in a different culture and absolutely not a habit that parents want to encourage in their kids. Even more, “Abby Lee Miller in Dance Moms encourages unhealthy competition, Squid ward in SpongeBob Square Pants supports being selfish, and Kim Kardashian and Kris Jenner in Keeping up with the Kardashians promotes appearance over achievement (Commonsensemedia.org, 2014).” All those popularized characters on TV shows can easily draw youths’ attention and influence their decision making by showing wrong role models to them.

Moreover, excessive television watching would cause health problems. Evidence from many studies recommends that the more TV young people watch, the more likely they gain a variety of health problems and to die at an earlier age. Showing in the Journal of the American Medical Association, researchers studied date from eight people who participated in the study voluntarily and concluded this, “Every additional two hours people spend on watching Television programs on a typical day, their risk of developing type 2 diabetes increases by 20% and their risk of heart disease increases by 15%. (EverydayHealth.com, 2014)”

In addition, the incidence of obesity is another serious problem as an effect by spending too much time on watching television programs: “In the U.S., almost half of all children ages 2-15 exceed government recommendation, and a study conducted in 39 countries found that overall, 41 percent of children watch more than two hours of TV per day. (Obesity Prevention Source, 2012)” Studies for children ages 2 through 15 have showed watch 2 or more hours of TV per day predicts strong obesity risk as high as 14.1% for males and 17.6% for females (Data from Janne E Boone, 2007).

Spending too much time on television not only can create health problems for young people, but can also cause them to have bad performance on academic work. Many studies have found the relation between television watching and academic achievement. For example, a meta-analyses of 23 studies have reported already that “the average correlation between total viewing time and academic achievement was only -0.05 (University, 2014),” which is a tiny change that has most likely no influence on youths. Since the studies show -0.05 is the measurement base on two hours per day, researchers start to figure out how many hours for youths to watch television can cause problem. More accurately data have showed that watch 2 hours or more television per day has a higher rate with decreasing achievement, and most studies have found a similar pattern.

The efficient solution for avoid the negative influences of television is to reduce the time of watching. New information from various fields often bombard youths’ mind over and over again, in order to eliminate the adversely affects, young people should control the television watching time wisely and do more outdoor activities to maintain a healthy lifestyle. Furthermore, watch good educational programs that carry healthy content, engage in positive activities, and encourage audiences develop good habits and refrain from bad behaviors.

Negative Influences of Media
http://www.buzzle.com/articles/negative-influences-of-media.html Impact of media use on children and youth
http://www.ncbi.nlm.nih.gov/pmc/articles/PMC2792691/

The Good and Bad Effects of TV on children
http://www.raisesmartkid.com/all-ages/1-articles/13-the-good-and-bad-effects-of-tv-on-your-kid 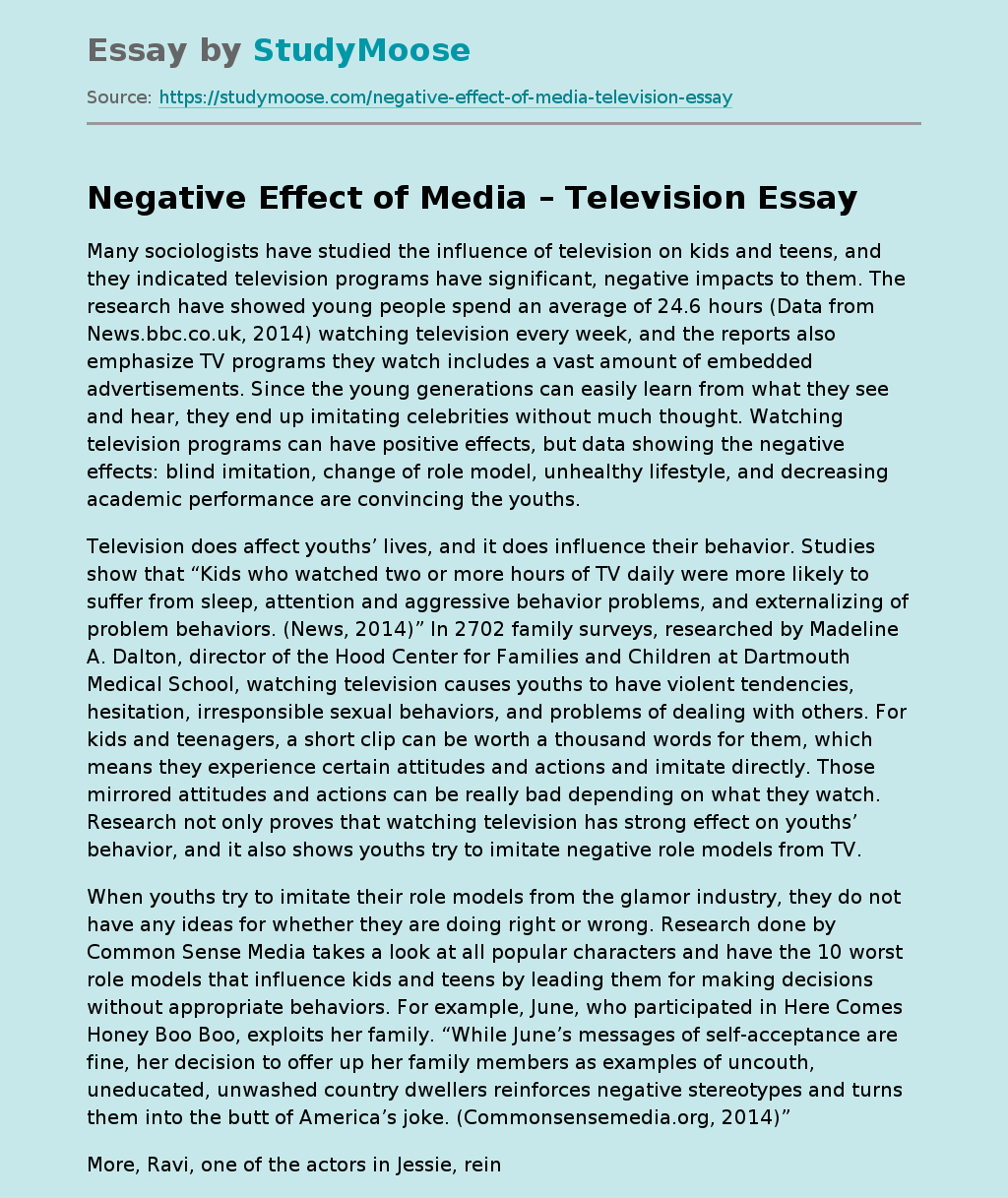