The night is a memoir written by Elie Wiesel who was a Holocaust survivor, Jewish writer, professor, political activist, and Nobel Laureate. The memoir is about Elie Wiesel and what he went through and his experiences during the Holocaust. He wrote the memoir to try and prevent events such as the Holocaust from happening again. He (Elie) grew up in a small town named Sighet (was known as Sighet in Hungary Transylvania and now known as Sighetu Marmației, which is a city in northwest Romania).

Don't use plagiarized sources. Get your custom essay on
“ Faith Theme in Night by Elie Wiesel ”
Get custom paper
NEW! smart matching with writer

Elie has a focus on two religions which are Cabbala and the Torah. Cabbala is a form of Judaism and Torah is a religious text that refers to the first five books of the Tanakh. At the start of World War II in 1939, Elie was complete and utter with his faith and belief in both religions and belief in God. During the War and Holocaust, Elie’s beliefs in God changed ever so slightly each day as he experienced pain and suffering more and more as the war went on.

He believed that everything was not real and that this could not be happening and he expected a sign from God that it was not real and that it would stop. However no sign was sent and Elie’s faith, belief, and morals in God started to decrease as he felt that this could not have been real. Throughout the memoir and throughout Elie’s experiences, he constantly talks about how this could be happening as God is good and could not create so much evil from one doing.

The religions he studies have two different concepts which are; one, God is everywhere no matter what happens and he will always be there to fix things, and two, faith is about questions and not answers. During the memoir, he talks about how God has created such evil and wrongdoing and that he can’t believe the events that have happened. Due to the experiences, Wiesel has during the Holocaust, his faith changes dramatically.

“Never shall I forget those flames that consumed my faith forever.” (p.34). His faith in God altered as time went by due to the lack of compassion and grace shown by the guards, the separation of his family, friends, and other people, and how people could take away other people’s belongings and change their identities completely. The number of deaths Elie witnesses also dramatically changes his faith. Weisel writes, “Never shall I forget the small faces of the children whose bodies I saw transformed into smoke under a silent sky.” (p.34). Elie’s traumatic experience makes him question God’s existence as he cannot comprehend how young children were subjected to such horrors and atrocities. The image of children’s bodies turning into smoke drifting up into the sky is something that will haunt him for the rest of his life. One death he witnesses that make him lose faith is when he sees a young boy choose food over his father. While they were traveling between two concentration camps, all prisoners were delusional from lack of food. Elie saw from his own eyes, a young boy murder his father for a small piece of bread, and then another man kills the son for the same amount of bread. As Elie saw these events unfold, he did not know whether or not to trust God as he believed nothing bad would ever happen. Elie wondered if God was even still there for him after seeing a man die right in front of his eyes. The hardest death for Elie to witness was his father’s however.

Elie’s father’s death did not have a massive impact on Elie as he knew it was going to happen eventually. Seeing people die right in front of him had become so common so seeing his father die had a big impact but not as big as what most thought. Not just the deaths caused Elie’s faith to change but the lack of sympathy the guards have for the prisoners. Prisoners would be abused and treated as though they were animals at concentration camps by guards. Elie’s father was beaten in front of him which changed his emotions and beliefs adequately. One guard, Franek, beat Elie’s father and Elie lost faith in God even more.

Frank, who was a guard at the prison, beat Elie’s father. Elie refused to give up a golden crown and so Franek blackmailed Elie by beating his father. The guard’s decision and readiness to beat Elie’s father, an old man, just for a small proportion of gold shows how the guards did not care about any of the prisoners and how ruthless and egocentric the guards were.

These events all caused Elie’s faith and beliefs in God to adjust. These events in Wiesel’s life are horrific and Wiesel will never forget the events that took place on ‘that one long Night’. 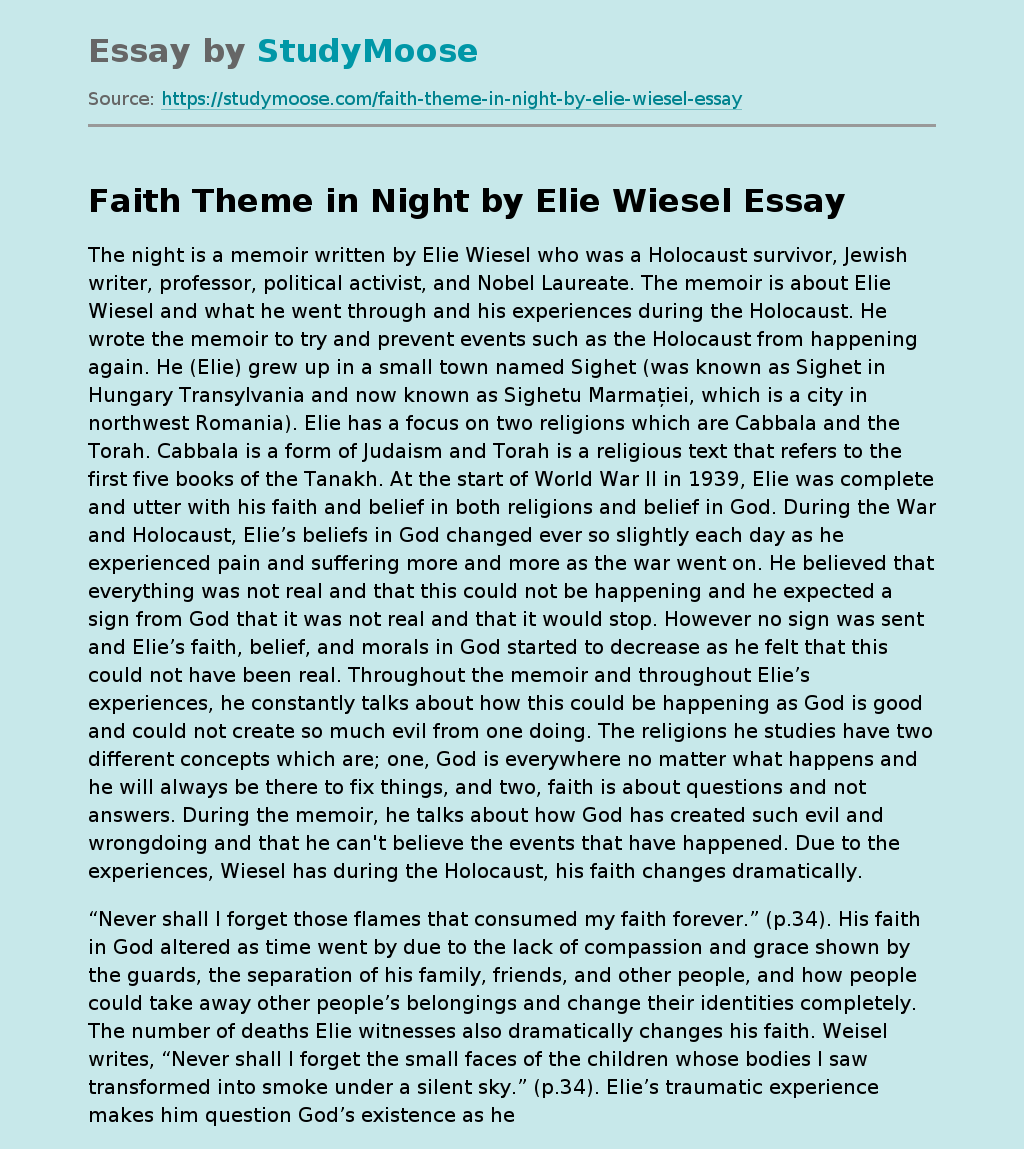