Examine why the impact of reindustrialisation is greater in some locations than in others, using examples at the regional and national scales

Reindustrialisation is the development of new industries, such as the high-technology sector, and small businesses in many economically developed countries. It has occurred due to the increasing level of global competition forcing all industries to improve productivity, leading to restructuring by introducing more efficient production methods (mechanisation or automation), but also through agglomeration (merging) with another company in the same sector. The impact of reindustrialisation can be seen on a large scale around the world.

The UK and the EU have received massive foreign direct investment (FDI) from firms eager to set up business in Europe.

Don't use plagiarized sources. Get your custom essay on
“ Examine why the impact of reindustrialisation is greater in some locations than in others, using examples at the regional and national scales ”
Get custom paper
NEW! smart matching with writer

Transnational corporations (TNCs) are very large firms which market products globally and have worldwide manufacturing capabilities. Their location at a national scale is largely influenced by political factors, particularly governments, who are keen to encourage inward investment not only as this creates jobs, but also as it increases a countries trade by boosting export.

New TNCs have chosen to locate in the UK as opposed to other parts of Europe for numerous reasons, including the stable political climate, low wages, relatively high productivity, and there is a big market for their products.

They operate under a system where labour is spatially distributed between different functions (headquarters, design, research and development, and production) at separate sites. TNCs powered the revival of many old industrial regions through inward investment into the area.

An example of the impact reindustrialisation has had on such a region is through the regeneration of the North-East, primarily by the Japanese car manufacturer, Nissan.

It opened its first European assembly plant at Sunderland in 1986, creating thousands of jobs in the car industry. It also influenced several automotive parts manufacturers to follow, including the electronics companies Fujitsu, located in Newton Aycliffe, Durham, and Siemens, located in Newcastle, employing more skilled and highly qualified persons.

The foreign inward investment into the North-East transformed the region’s industrial structure. Reindustrialisation has also led to the rapid growth of the quaternary, high-technology industry, however it is still only a small sector of the manufacturing world. High-technology refers to industries that have developed within the last 25 years and whose processing techniques often involve micro-electronics, but may include other highly sophisticated products such as medical instruments. These industries usually demand high inputs of information, expertise and research and development (R&D).

They are also said to be footloose, and do not need to locate near raw materials, but can instead locate where the highly skilled scientists, engineers and technicians who are crucial to such and industry, are found. This does, therefore, mean that they are not entirely footloose and so they tend to agglomerate (cluster) around areas with skilled labour workforces. At a regional scale, the major concentration of high-tech industries in Britain is along the M4, extending westwards from London to Reading, Newbury, Bristol and into South Wales, otherwise known as the “M4 Corridor”.

This region has proved so prosperous as a site for reindustrialisation attracting telecommunications firms, IT businesses and microelectronics. It has been so popular due to its location in close proximity to the M4, the M5 (well developed motorway networks), which has increased mobility and accessibility to the area, however it is in close proximity to universities, such as Oxford, Cambridge and Reading, which accommodate high-tech research and development plants and business parks, such as the Cambridge Science Park.

These science parks are comprised mainly of agglomerations of small manufacturing enterprises (SMEs) and R&D functions, which employ qualified students as they leave university, again having an impact on it and the surrounding area. The impact of reindustrialisation is greater in some locations than in others due to the amount of inward investment by transnational corporations and small manufacturing enterprises into a particular area, but also due to the nature of the manufacturing industry there is.

If the foreign direct investment is greater in one area as opposed to another, the impact is likely to be greater as it means that more jobs are being created and there is a higher productivity in the area. Such large investment also attracts other firms in the same sector, again creating jobs and further increasing productivity. This leads to rejuvenation of the old, industrial regions, i. e. Sunderland.

The nature of the manufacturing industry is likely to have an influence into how great the impact is, as high-tech industries tend to locate where other high-tech industries do (agglomeration or clustering in an area), which enables them to work off each other, but also firms locate where there is a highly skilled workforce (which is in demand) so employees do not have to travel far. Again this causes agglomeration which leads to an area being reindustrialised at a greater rate into a more prosperous location.

Examine why the impact of reindustrialisation is greater in some locations than in others, using examples at the regional and national scales. (2020, Jun 02). Retrieved from http://studymoose.com/examine-impact-reindustrialisation-greater-locations-others-using-examples-regional-national-scales-new-essay 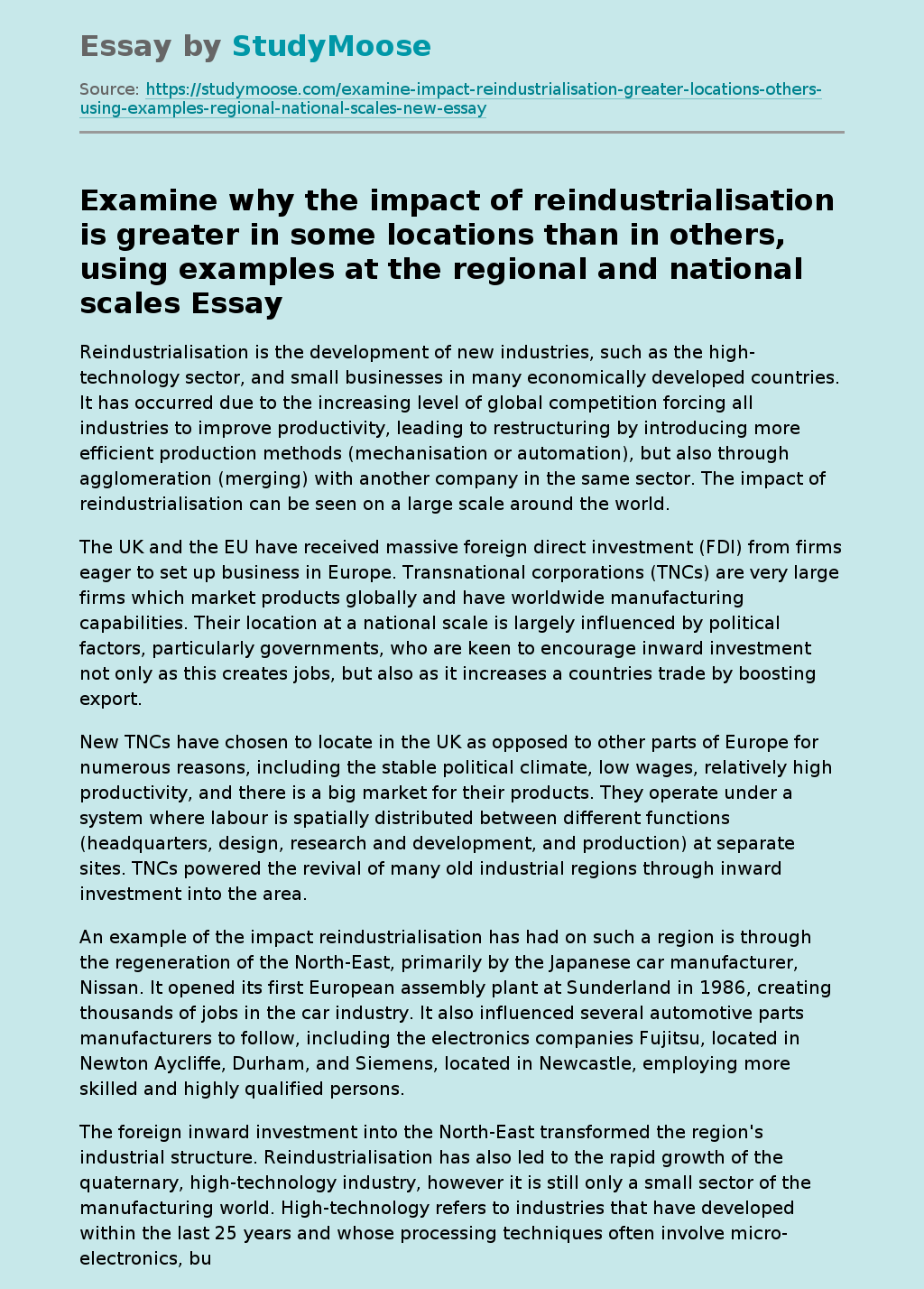