Don't use plagiarized sources. Get your custom essay on
“ Foreign Intervention ”
Get custom paper
NEW! smart matching with writer

Foreign intervention in the form of humanitarian aid does more good than harm, as it hastens the restoration of infrastructure and provides the citizens with the necessities to tide over difficult times. Natural disasters cause substantial damage to a country, with homes destroyed and lives lost. The people involved are often rendered helpless. Developing nations in particular, may not be able to help much due to the lack of financial reserves.

Humanitarian aid given in such times is desired and will be of great help to the people, due to the relief provided in times of distress.

An example would be Haiti, which was badly hit by an earthquake. International organizations such as the United Nations and Red Cross Foundation provided food and medical care, alleviating the situation in Haiti. Hence, humanitarian aid brings about many benefits, doing more good than harm.

Developing nations embattled in internal turmoil may require foreign intervention to restore political stability in the nation. Repressive regimes such as that in Libya have resulted in brutality and oppression.

The people are unable to stand up for themselves to lead a change. The people desire intervention, as they wish to be freed from tyrant rulers. Foreign intervention will aid the citizens in effecting a change that will improve their lives drastically.

Furthermore, the political stability that results may restore economic prosperity in the nation, which was not achievable previously due to uncertainty and fear for the future by businesses. Political stability will reduce those fears and create a better environment for the economy to flourish. These benefits are far-reaching and long-term, and are essential to the development of the nation. Hence, foreign intervention in a developing nation does more good than harm.

The intervention in another nation’s internal affairs may undermine national sovereignty, which is an important attribute of modern states today. Sovereignty is of great significance, and no country will willingly allow foreign nations to infringe on their sovereignty. Foreign intervention may result in negative repercussions, such as the strain on international relations. This is seen by Greece’s anger over perceived intervention in their internal affairs by Germany during the Eurozone crisis. Strained relations between countries undesirable for both countries as it may lead to restricted trade, and in turn the loss of economic opportunities. Foreign intervention may lead to long lasting harmful impacts if relations do not improve, hence it does a significant amount of harm.

Foreign intervention may serve as a tool in correcting the infringement of human rights, which will do good and justice to the people subjected to unfair treatment. The 1994 Rwanda genocide was an instance where human rights were compromised. The Hutus persecuted the Tutsis, and a coalition of states was prepared to put a stop to that. The intervention will help the Tutsi population escape such brutality and violence.

The Tutsis will be able to live a life free of brutality, which will improve their physical well being and be able to lead a more peaceful life. Human rights should never be infringed as it is the basic rights that every human being should possess. Therefore, in cases where human rights are compromised, foreign intervention is warranted and it will bring about more good than harm.

In principle, it may seem that the harm outweighs the good if sovereignty, a crucial aspect of every nation, is infringed. However, it depends on the circumstances. The dire need for humanitarian aid, fulfillment of basic human rights and freedom from repressive regimes may surpass the need for sovereignty. It will not be harmful to have foreign intervention. Rather, the people in developing nations will experience many positive impacts, and the country may be able to develop further and prosper, hence foreign intervention does not do more harm than good.

Foreign Intervention. (2016, May 26). Retrieved from http://studymoose.com/foreign-intervention-essay 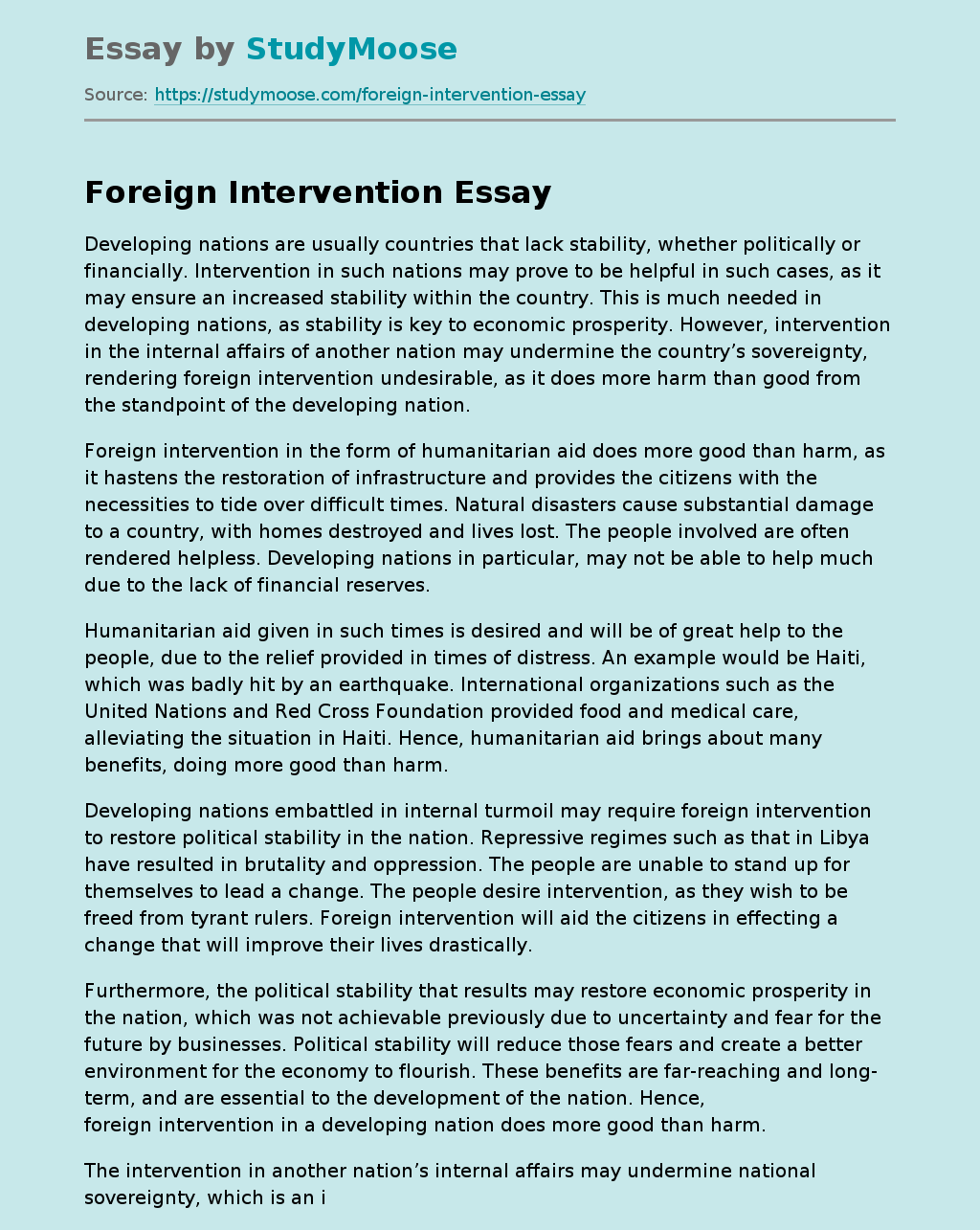