While conducting research or writing professional articles or papers, it is expected that one meets certain laid-down ethical guidelines. Ethics in research has become one of the most essential topics in academia, and areas of scientific dishonesty have been identified. In my opinion, the areas of scientific dishonesty should be ranked as follows, starting with the most serious to the least serious violation: 1. Fabrication and falsification 2. Plagiarism 3. Faulty data gathering procedures 4. Non-publication of data 5. Sneaky publication practices 6. Poor data storage and retention

7. Misleading authorship Fabrication and falsification of data is publishing information or basing research on events that did not occur at all (Reskin, 2010). Under falsification, overstated numbers, alteration of data, inclusion of personal biases and misinterpretation of literature are the forms of scientific dishonesty. When fabrication and falsification have been done, works produced do not have a basis or any truth in them; and therefore mislead the readers (Reskin, 2010). This could have very serious consequences; basing literature on lies therefore misinforming the public.

It therefore comes first in the list. Plagiarism is the use of copyrighted materials or generally other people’s without acknowledging their contribution (Indiana University, 2004). It is very unethical not to give credit to people who struggled to produce work, and a researcher or a professional writer would be claiming to be the originator of the ideas if he or she does not acknowledge the actual producers of literature material. It comes second in my list of scientific dishonesties (Indiana University, 2004).

Faulty data gathering is third, since if data collected is not precise or accurate, the conclusions are going to be force; and the effect is like that of falsification (Callahan, & Hobbs, 1998). At number four is non-publication of data, which occurs when data is suppressed. It is unethical to ignore exceptions even in cases where nothing conclusive has been established from research, since finding out nothing is just as important as finding out something. If the results are withheld, future researches may be conducted with the same mistakes (Callahan, & Hobbs, 1998).

Sneaky publication practices come in at number five since it withdraws a large measure of integrity or authenticity of information (Gregory, 20003). At number six is poor data storage and retention practices since in this way, information, no matter how valuable, is easily lost, therefore undermining the impact of research and writing. I chose misleading authorship as the least serious area of scientific dishonesty through ethical violations knowing that since it gives people claim for projects they did not fully participate in; it does not have effect on the quality of information (Jefferies, 2004).

Informed consent is a term used in the ethical or legal context to indicate that the consent a person gives regarding certain events or activities involving him or her meet certain minimum standards (Reskin, 2010). An informed consent is issued by a person to indicate that he or she is fully aware and that he or she clearly understands and appreciates the facts related to the event, its implications and finally, its long term impact. The purpose of informed consents is to make sure that people are not coerced or forcibly involved in activities against their wish.

People must also be made fully aware of the procedures they are to be involved in; and the potential risks from such. People allowed to give informed consents must first be proved to possess properly functioning intuitive and mental faculties (Reskin, 2010). People who are impaired by factors and diseases such as mental retardation, potentially damaging mental illnesses, intoxication from substances like alcohol, acute sleep deprivation, Alzheimer’s disease or a being in a comma are not allowed to give informed consents.

The above guidelines are meant to ensure that human specimens are treated with the respect they deserve and are not exposed to risks without their consent. It is required that they be informed of all the details of research procedures, the risks that may arise and any potential long term effects of the research (Callahan, & Hobbs, 1998). The research must also be tailored in such a way that it benefits them in one way or another. Their justice should also be assured.

Investigators or researchers first have the responsibility of making sure that they study the ethical acceptability of procedures they intent to apply on human subjects; and they must also respect a human subject’s wish to accept or decline involvement in a research, and their choice to withdraw if the need arises (Callahan, & Hobbs, 1998). If undesirable side effects result, it is the responsibility of the researcher to remedy the situation. Animal subjects, despite the fact that they cannot give informed consents, also have rights which are protected; and their use in research is also governed by some ethical standards.

First of all, the use of animal subjects in research should be justified (Reskin, 2010). Animals should not be used in projects that are not going to yield anything useful to the human society. Secondly, animal subjects should be properly handled. Any studies conducted on them should not alter their natural functionality or harm them in irreversible ways. Proper living environments and sufficient food should be provided to animals under captivity, and animals should only be handled by sufficiently trained personnel (Reskin, 2010).

Research should be optimized to reduce pain and harm on animal subjects, and it is important that the animals are legally acquired and the research given the go ahead by the authorities. It is also an ethical requirement that humane treatment of animals in research institutions is ensured at all times (Reskin, 2010). Animal rights activists have been on the forefront of campaigning for the abolition of vivisection, or at least humane treatment of animal subjects. 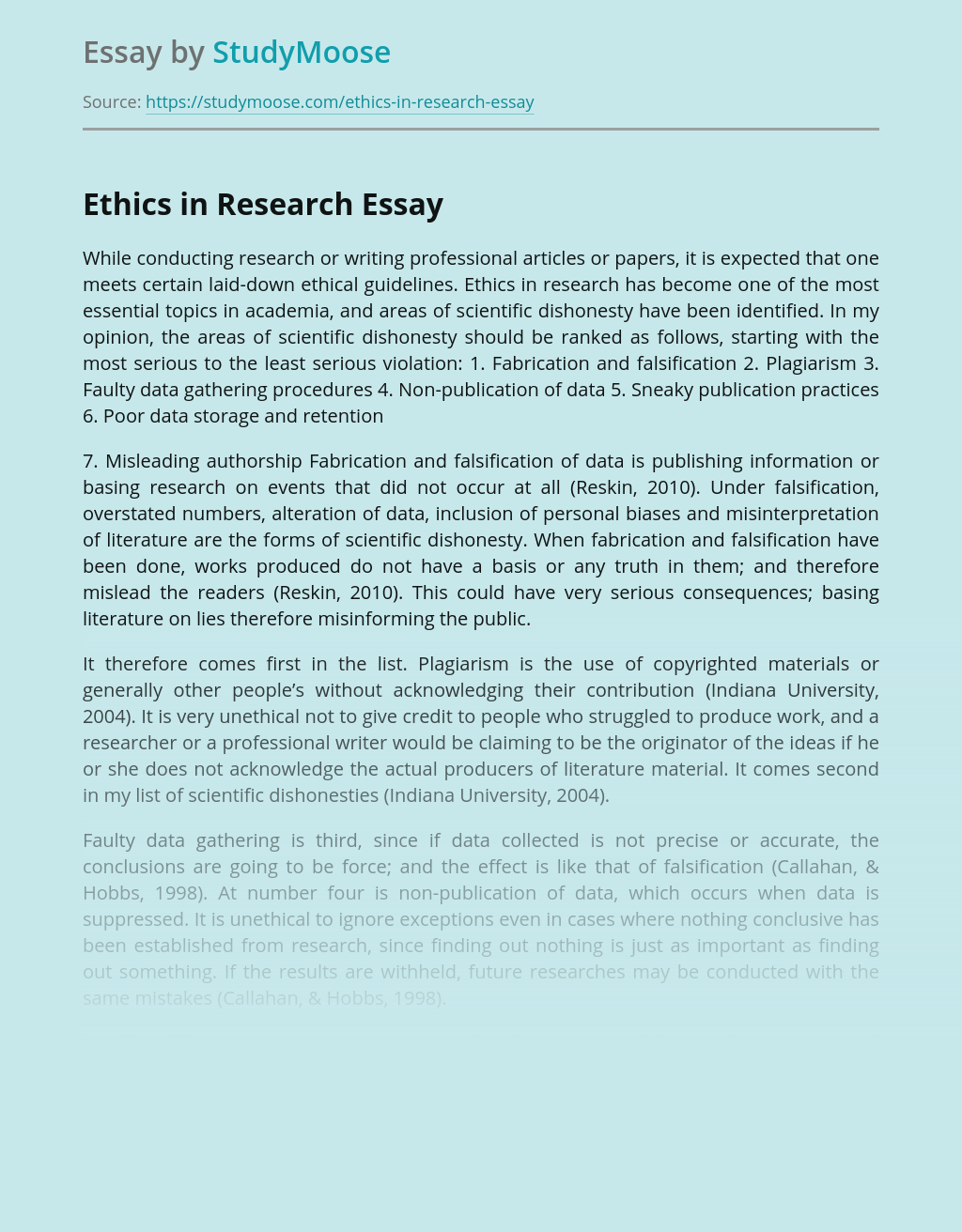 History and Memory: The Fiftieth Gate

History and memory are both needed to uncover human experiences. We are already aware, from ourselves, that memory can be defined as recalling or recognising ones past and previous experiences and events; however memory is dependent on one’s involvement and personal perception of their past. History is the meaning of documented records of past events,...

This case study involves three retailers that engaged in alternative approaches to eGrocer strategy formulation. The primary goals were to assess the relationship between a company’s business model(s) and its performance in the online grocery channel and to determine if there were other company and/or market related factors that could account for company performance. The...

Get Essay
The STP Process in Marketing Management

STP stands for segmentation, targeting and positioning. STP, which stands for segmentation, targeting and positioning, is a fundamental concept in marketing management. It is usually the first step in developing a marketing plan. The three parts of the concept maximize exposure and market saturation by looking at the most important factors that impact how a...

Strengths Strong Brand Reputation can be considered as the main strengths of BMW. Through many years marketing executive has been grown the brand image, so now BMW is perceived as the third most expensive brand in automotive market and is valued at $29 billion. Trained and highly skilled workforce is the asset in which BMW invests...

Every child needs to be surrounded by tenderness and love in order to grow up to be a successful person. Parents try as much as they can to offer everything that is required for their baby to have a comfortable life. However, when their children become teenagers, they will want to prove their maturity in...