English as a Global language

Over the last decades English has played an important role around the world as common language for economic, education, scientific and entertainment exchange between nations and in particular between people. The positive aspect is that English language open doors in terms of global communication and business, because this language has become a powerful tool in terms of improving productivity and driving growth where it is used . However, there are also a number of significant negative aspects such as English dominance and loss of languages mainly driven by globalization.

Don't use plagiarized sources. Get your custom essay on
“ English as a Global language ”
Get custom paper
NEW! smart matching with writer

Therefore, this essay will argue the negative impacts of having English as a global language because of the way English language affects young people’s linguistic skills and behaviour through mass media.

Using English as an international language has some benefits in people’s lives. Firstly, the major positive effect is global communication due to the widespread coverage recognized and understood by people everywhere.

One example of how English has helped to improve communication in the world is given by Crystal (2002) English language was implemented in aviation field after the second world war, when the International Aviation Organisation agreed with the objective of traffic control safety. This is important because having one common worldwide language is in a very real sense the final safety net. Additionally, English is the widespread language in education due to the great influence of English in several fields, where communication is the key in order to improve development and knowledge (Weil and Pullin 2011).

In fact, today this language is used to normal medium instruction in higher education for many countries, including several where the language has no official status. What is more, it is that English has had positive impact in business because it is an important tool in terms of driving growth and international development. There are some significant examples in multinational corporations such as Siemens which is the largest electricalengineering companies in the world located in Germany. Since 2002 the corporate language is English (Fredricksson, Barner-Rasmussen & Piekkari 2006). It is clear that companies use English not only for productivity but also for integrating people at work. Allied to this another case is in Deutsche Bank which implemented English as a common language for meetings, in order to achieve efficiency (Rogerson-Revel 2006). It can be seen then that English language has positive effects in people’s lives not only in everyday life but also in specific fields such as aviation, education and business.

However, if one looks closely to the situation of minority languages there are a number of negative aspects of having English as a worldwide tongue. One of these is English dominance. Actually, language plays an important role in terms of influencing people’s behaviour through mass media such as movies, satellite TV and DVDs which can be viewed almost universally, examples of this such as Hollywood Films, TV Series and CNN news (Morris 2002). The effect of mass media does not stop when the movie or program ends. This lingering effect might just be the cause of behavioural changes in people.

Another example of the English media dominance is given by Kaul (2011) who argues that most language’s scholars think that the television companies especially from the US have created a variety of programs such as Bloomberg, MTV music television and National Geographic in order to cover different audiences and as a result influences on people’s thinking. It is clear that English has negative consequences on people through mass media communications due to the influence on their mentality. Language loss is another negative effect of English as global language. Actually, according to Whalen (cited by Gibbs 2002), in the United Kingdom there is some dialect Irish Gaelic, where people started seeing their language as inferior to the dominant language, then people ceased speaking it for everyday life.

Thus, if their children stopped speaking their own language as a result the language inevitable will vanish. Another case related to this issue is in the United States where some languages are into extinction such as Shoshone which is the language of native indigenous community, this tongue has been taught for generations carrying the identity of their people. However, due to the pressure of English language and American culture, Shoshone will extinct inevitably (Krauss 2003). This is because Shoshone speakers have been influenced inevitably by American society. It can be seen that, there are significant examples of languages loss this issue is driven by English as worldwide language.

Therefore, although English as a global language can have some positive effects in fields such as education aviation and business communication arguably has more adverse effects. Young people have been facing serious problems in their linguistic identity due to English media influences . This aspect continually changes with the individual development, according to the environment and situations in daily life, where English is a powerful tool of communication. One example of this case is given by Kaul (2011) who states that global western brands such as Disney, well known in terms of influencing children’s behaviour through communication and shopping experience. This means that, The US export western perception of entertainment to the children under its consumer strategy with significant consequences in their lives.

Another example of English Media dominance in young people is in television such as cartoon network programs which have become a negative influence in terms of linguistic expressions (Hassan & Daniyal 2013). It is clear that, English language through mass media is affecting negatively behaviour and linguistic skills in young people. Another aspect that it is important to take into account is linguistic Culture loss. A recent study of a group of undergraduate students in selected private and public universities from Malaysia, found that being proficient in English is viewed as superior, higher status and elite social interaction than the local language. (Kim, Siong, Fei & Ya’acob 2010). The implication here is the detriment of the mother tongue and as a result the linguistic culture.

According to Keebe (2003) regarding indigenous linguistic loss is not only an issue in terms of linguistic concern but also in terms of preserving culture. It is clear that, as global language English is responsible for some damages in linguistic culture in some communities. This situation causes that minorities gradually move the language from the mother tongue to the foreign language with consequences in terms of culture identity. It can be seen then that there are some significant evidences to show that English language as a worldwide tongue can have negative effects in minority communities such as language loss and rejection of their own language.

Although, some argue that English as a common language may facilitate global communication, there are significant negative impacts in terms of misunderstandings between people. One of these is the pronunciation due to the different English accents around the world. There are some examples in aviation field one example of this was between members of the crew and a passenger in Air New Zealand flight, from London to Oakland, California where a young man passenger understood Oakland instead of Auckland. Therefore, was taken to Auckland, next day New Zealand airlines gave him a free-ticket to Oakland (Krivonos 2007). This example shows that misunderstanding can occur in any part of the flight whether landing or taking off stage.

Moreover, there are examples in terms of communication where English as a global language has changed its vocabulary due to the adaptations in different countries depending on the communicative needs such as words associated to traditions, rituals, cooking, recreation, habits, and many other aspects of daily life. For instance, in South Africa the expression ‘The bakkie had to stop at a red robot’ , people need to understand that the word bakkie means a truck and the word robot means traffic light (Crystal 2003). This means that English as a common language is exposed to several changes due to the language itself now belong to the world.

Moreover, while some authors claim that English as a worldwide language has positive impacts in terms of business WorldLingo (cited by Feely and Harzing 2003) has argued that there are several companies especially in China, South America and Middle East where the guideline is to speak same language as their customers. It is important to take into account that negotiations and legal documents are inevitable in mother tongue. This means that, for companies the priority is customer development needs. Thus, English in these situations does not have benefits for them. Further to this, according to Joshihara (cited by cited by Feely and Harzing 2003) he points out, in his studies that Japanese multinationals corporations most of the overseas offices are leading by Japanese people, this means that senior and medium management level prefer to carry on working in Japanese language.

This means that, the priority for several companies in Japan is to hire Japanese people in order to solve their language communication issues. It can be seen that even though there are some positive impacts on having English as a global language for global and business communication purposes, it can be argued that there are several evidences that English plays an important role in terms of misunderstandings and improvement opportunities in business communications whether aviation or multinational corporation

In conclusion, English as a global language clearly has a negative impacts on young people’s linguistic skills and behaviour through mass media. While , English has a positive effects in terms of global communications such as aviation, education and business, there are significant negative impacts on people due to the misunderstandings such as aviation field and business communication. Moreover, having English as a common language may affect negatively adults’ thinking through media due to the influences on mentality.

Additionally, English language plays an important role affecting young people’s behaviour and linguistic skills via mass media. Therefore, English as a worldwide tongue is influencing negatively local languages and by default its survival due to the pressure of the English language in daily life in the communities. Moreover, English language is responsible for damages in linguistic culture whether local communities or minorities in different countries. Therefore, governments and leaders should consider the adverse consequences of English as a global language when making decisions in mass media policies, and consider the importance of its impact on young people and minority communities in terms of linguistic and culture identity.

English as a Global language. (2016, Apr 05). Retrieved from https://studymoose.com/english-as-a-global-language-essay 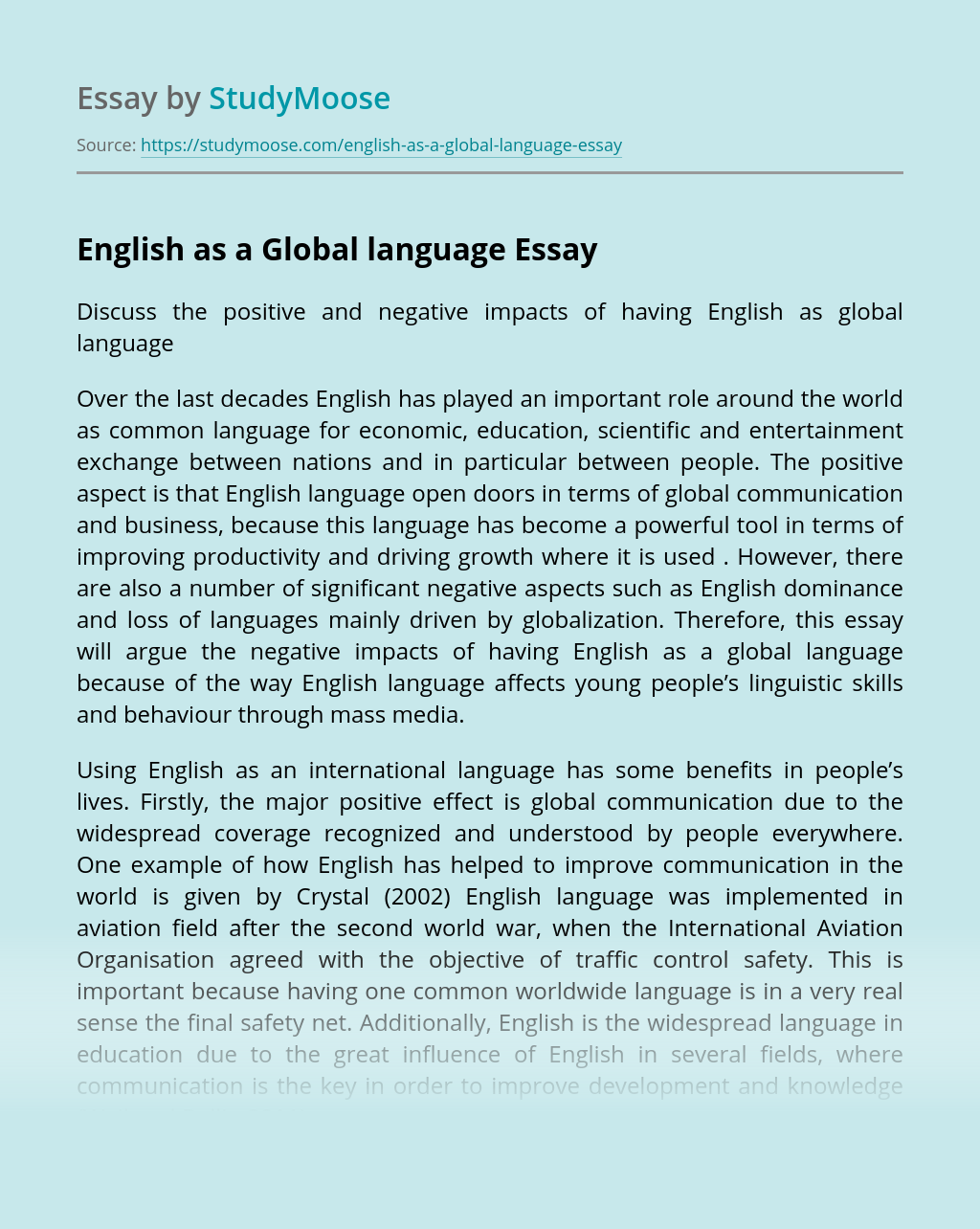