Visual Literacy throughout the history of our world has been important; dating back to cave drawings and carvings, and developing all the way to automated street signs signaling vehicles when to slow, stop, or go. Visuals are a part of our daily lives today as much as they were at the beginning of man’s time-and other living beings’ time-and his, first ability to communicate, visually. Communication was not something that was first spoken or written, it was something shown or demonstrated; such as dance for instance, while someone else was viewing/watching, to portray a message or a feeling to that other person.

Don't use plagiarized sources. Get your custom essay on
“ Visual Literacy ”
Get custom paper
NEW! smart matching with writer

Whether the Visual Literacy or communication is hand signals-similar to sign language, facial expressions-as simple as the way an individual winks at another individual today, a nod to another person, or something as complex as an artists’ message through a painting, sculpture, other, or not; Visual Literacy is and always will be the first mode of communication in the past, present, and future.

Visual Literacy can be a considered a universal language because everybody, or most individuals understand pictures, drawings, artwork, or hand signals/sign language of today.

“The only individuals who do not understand visuals are the blind community-however, this handicap is adapted by the body and other the other body senses become enhanced greatly” (B. Kennedy, 2010). Perhaps sign language varies throughout different regions of the world, but the basics will always be well-known, regardless. For example, pointing to oneself means me, no matter what country you are residing in.

A simple sign such as this is a basic way to communicate, and is universal.

If two individuals from different countries who did not understand each other were to sit down together and draw a picture of a house, hut, or dwelling of some sort; each individual would understand the drawing, or picture of a dwelling as a home. This is considered Visual Literacy, as well. These two individuals may not be speaking with their mouths, or sounds, but they are communicating with visuals. Brian Kennedy provides an excellent portrayal of what he believes Visual Literacy to be in today’s world.

However, our text provides a wonderful explanation of Visual Literacy within the business world today as well, and between both of these resources is a wealth of information. Mr. Kennedy takes a very literal look at Visual Literacy- no pun intended. Kennedy believes that what we view each day through sight is a way that we can learn and communicate if we pay attention. Most of the time, however, we do not pay attention. In fact, he states, “everything we see is an image, but unless we connect cognition and memory, we do not remember what we see” (B. Kennedy, 2010).

We see hundreds of images everyday throughout our lives, but unless we have some connection to the image, we do not retain it. However, if we “slow-look, we can look, see, describe, analyze, and interpret or construct meaning” (B. Kennedy, 2010). As with this prior quote, Mr. Kennedy made many other interesting statements within his presentation. For instance, “we read non-text 60,000 times faster than written text,” and “90% of what we learn is taken in visually” (B. Kennedy, 2010).

Regarding our text, and the definition provided regarding Visual Literacy compared to the video containing Brian Kennedy speaking about the subject, our text is more business oriented, or technically derived. The text this week seems to focus on the high-tech aspect of Visual Literacy. This includes television, billboards, computer images, etc. Also, there almost has to be a difference between the two definitions because one was presented visually, and the other was presented in a written format. Within the text, there are other terms for Visual Literacy, such as media literacy, for example.

Also, within our text (W.Ryan, 2012), are two authors (Avgerinou and Ericson, 1997) featured who present this opinion of the definition of Visual Literacy along with 9 other definitions, but will not get into in this paper: “Visuals may be objects, events, actions, pictorial representations, nonverbal or digital symbols, written words, or numbers.

They then argue that visual literacy refers to the use of visuals for communicating, thinking, learning, constructing meaning, creative expression, and aesthetic enjoyment. For example, supplementing a business meeting with visuals created in PowerPoint or Prezi communicate information in a manner alternative to the spoken word, may engage visually literate audience members in critical thinking about the message, and help them learn more than they may have if they had only heard the message.

When these media are used effectively and appropriately, they may stimulate creative thinking and generate affects or liking among audience members through the use of charts, graphs, audio, images, and video” (Avgerinou and Ericson, 1997). It seems that our text is much more technical as far as addressing the definition of Visual Literacy, than the video created by Brian Kennedy.

Perhaps it seems that way because the definition that Brian Kennedy offers is visual, as well as audible, but it does seem that he offers a much easier explanation. Communication, through visuals such as photographs for example, have been a way of communicating across borders, oceans, and continents over the decades. One photograph that finds its way on a national magazine cover can convey much more than an entire book devoted to a certain topic. A wonderful example of this comes from our text this week, and that is The National Geographic cover of “Afghan Girl” that was the cover of the magazine when this girl featured was just 17.

It touched many people, and many lives, enough for the photographer to search her out years later without even knowing her name. She was found, and reunited with the photographer, but how does a girl who did not want her picture taken to begin with, react to a huge worldwide reaction to her picture so many years ago, and now with so much attention? She never even knew, or saw her picture. That says quite a bit, as well, as far as Visual Literacy. Perhaps it does not reach as far as we think it does.

Globally, perhaps we are not there yet, with our Visual Literacy-or, as easy of a definition, communicating visually. Perhaps we are still a bit Visually Illiterate when it comes to the way we want to portray others, our art, our people, or people from other countries. Also, we should be aware of the way that other countries present us visually. That is something that The United States has not really worried about too much, it seems. We find ourselves upon a pedestal at times and just burst in and start snapping pictures, or slapping paint, etc. The story regarding “The Afghan Girl” was a reminder of that.

We, as a Great Big Beautiful, Wonderful, Intelligent Country believe that all of our media reaches every crevice in the entire world, yet it does not, by any means. We must be mindful of that, while still trying to see everything we are looking at…. References: Avgerinou, M. , & Ericson, J. (1997). A Review of the Concept of Visual Literacy. British Journal of Educational Technology. Kennedy, B. (2010). Brian Kennedy’s TedTalk: Brian Kennedy: Visual Literacy and Why We Need It . Retrieved From: (http://www. youtube. com/watch? v=OefLEpds5Is). Ryan, W. (2012). Visual literacy: learning to see. San Diego, CA: Bridgepoint Education, Inc. 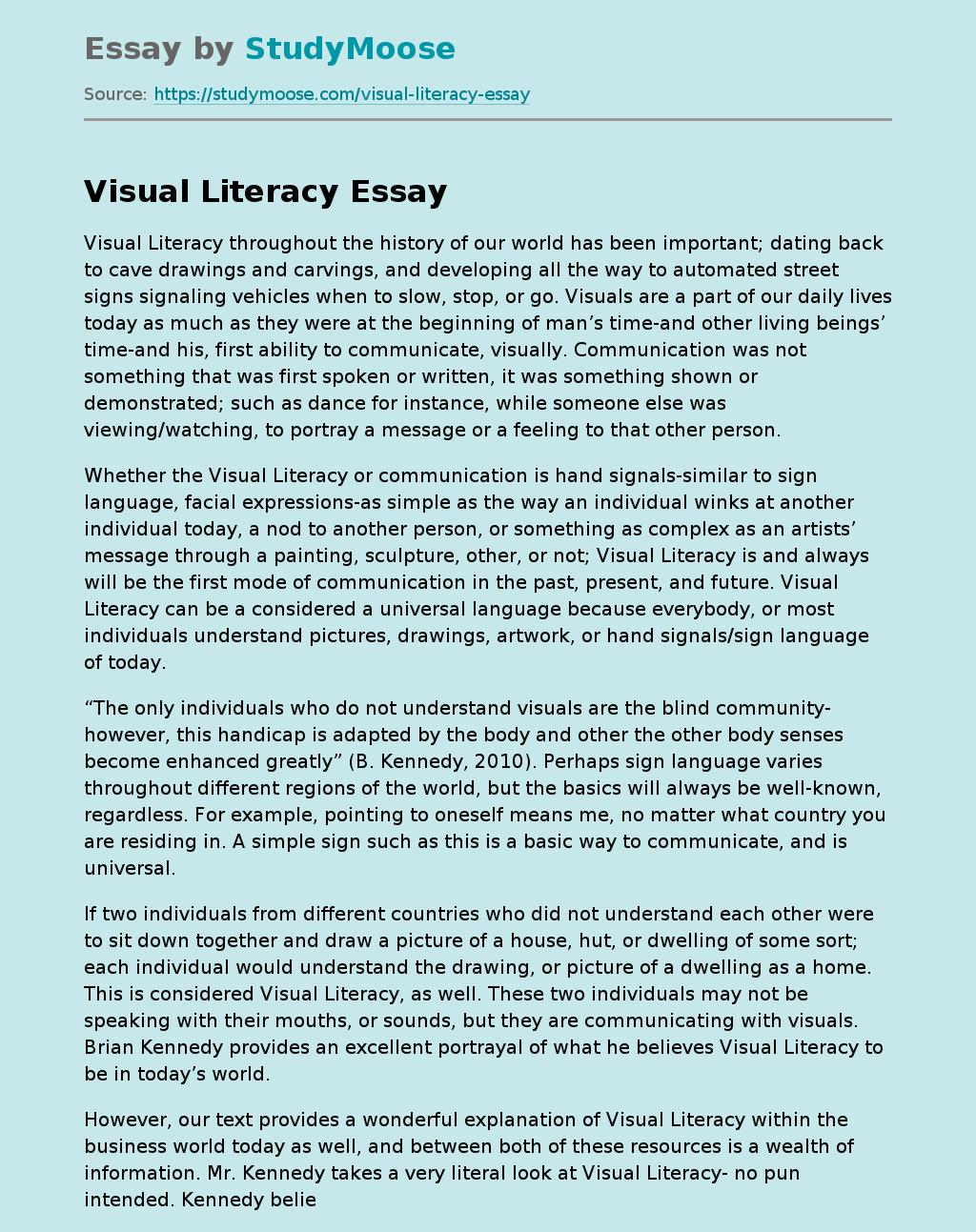