This memorandum addresses some of the key issues with Edward Jones, which includes the lack of an online presence, possible cannibalization from larger firms, and the inability to manage funds from institutional investors. I conclude that the most effective of all of the theorized strategies would be a combination of Edward Jones’ original business model with an online platform. This plan would allow Edward Jones to stay true to its fundamentals, as well as attract new clientele and provide better service to its existing clients.

Edward Jones has become the fourth largest brokerage firm in the United States. By holding on to a fundamental business strategy based on the core concepts of close client relationship and long-term investment focus, Edward Jones was able to offer excellent service and performance. However, with the industry rapidly changing, Edward Jones must evaluate its core values to sustain its competitive advantage but in a manner that will allow them to expand its services, and continue to compete with the top players in the industry.

When observing Edward Jones Financial, I found three critical issues and problems with the firm. Edward Jones built its business model around creating an environment that would allow entrepreneurs to thrive and run their own businesses to a certain extent. This is what originally led to Edward Jones’ success when the company first started; however, it is also the catalyst for the issues of the firm that were present in 2006. Edward Jones’ three main issues were the cannibalization of its business by bigger firms such as Merrill Lynch, customers leaving Edward Jones to manage their own money via online platforms such as E-Trade (MITR, 2014), and the lack of ability to manage high net worth funds that are typically present with institutional funds such as pensions.

Edward Jones built its business around meeting face to face with individuals in their homes and offices. This is a great model for an entrepreneur driven financial services firm. However, as the technology bubble began to burst in the mid 2000’s, online brokerages such as E-Trade began to draw customers away from Edward Jones. The lack of an online presence on Edward Jones’ part made companies that offered this service more appealing due to lower fees (OBR, 2008).

When examining Exhibit 5 (HBR,2007) , you can see that Edward Jones derived over 83% of its revenues from commissions and revenue from fees. Whereas, E-Trade generated only about 34% of its revenues from these categories. This shows that, online brokerage was advantageous to clients given that they could avoid expenses that were used to pay brokers, making it a significant problem for Edward Jones. The last major issue was that they were not suited to manage institutional funds. Despite building an excellent company around working with blue-collar individuals and families, it is clear that Edward Jones’ focus on the individual investor might have been a significant problem.

By only working with individuals and not selling large amounts of stock and bonds to institutional investors, Edward Jones passed up significant amounts of manageable assets and subsequently, revenue. Exhibit 5 shows firms that were managing institutional investments such as pension funds had significantly higher profit margins than Edward Jones. In 2005 Edward Jones’ profit margin was 1.05%, while Merrill Lynch and Morgan Stanley, were 27.8% and 26.33%, respectively. This also shows the average amount of assets in dollars per account at each firm. Edward Jones’ average assets per account were $45,556 while Merrill Lynch & Morgan Stanley was $163,667 and $137,111 respectively. Edward Jones leaves revenue on the table by not managing higher net worth institutional accounts.

Edward Jones’ strategic direction in 2006 had to respond to competitors like Merrill Lynch if the partnership wanted to maintain its exceptional performance and growth. The first option focuses on staying true to Edward Jones’ small-town roots and demonstrating the value of strong personal relationships with one’s financial advisor in planning for the distribution phase of life (Faux, 2014). FAs can take advantage of face-to-face interactions and close relationships to communicate to clients the importance of planning for the distribution phase as soon as possible and hopefully encourage client referrals. Also, a professional advisor who personally knows the clients and their needs provides critical support to keeping long-term retirement plans on track while still focusing on time-sensitive decisions. This defensive move could stunt the firm’s growth, and if it fails, could leave Edward Jones even more vulnerable to cannibalization.

The second option shifts the company’s original policies of strictly face-to-face interaction to a hybrid model, which includes online account and portfolio tracking and current news and research. This option adds value for existing customers because they can view all of their financial information in one place at their convenience. Additionally, this technology offering creates a minimally viable product for mass affluent “delegator” and “validator” type investors, and then entices those clients with the added value of a personal financial advisor. This option also leverages the firm’s existing research efforts into growing the business. The final option calls for a rapid expansion to institutional clients in an attempt to compete directly with competitors such as Merrill Lynch, Morgan Stanley, and Wachovia. The success of these firms indicates that expansion is possible. If Edward Jones does not expand, it will forgo potential market share and the attendant revenue. However, expanding as its competitors did would likely mean compromising many of the firm’s established values and beliefs.

I strongly recommend that Edward Jones shift to a hybrid model of face-to-face interaction combined with online account and portfolio tracking and access to current news and research in order to retain existing clients as well as attract new clients. This strategy enables the firm to stay true to its client-centric roots and positions the firm for growth. When clients have instant access to their financial information and the latest news and research, they feel better equipped to face complex distribution decisions. Potential clients in the post-Internet bubble world expect basic technology offerings but also appreciate the benefits of a personal financial advisor. Being competitive in the future requires embracing technology as well as taking advantage of the firm’s close personal relationships with its clients. 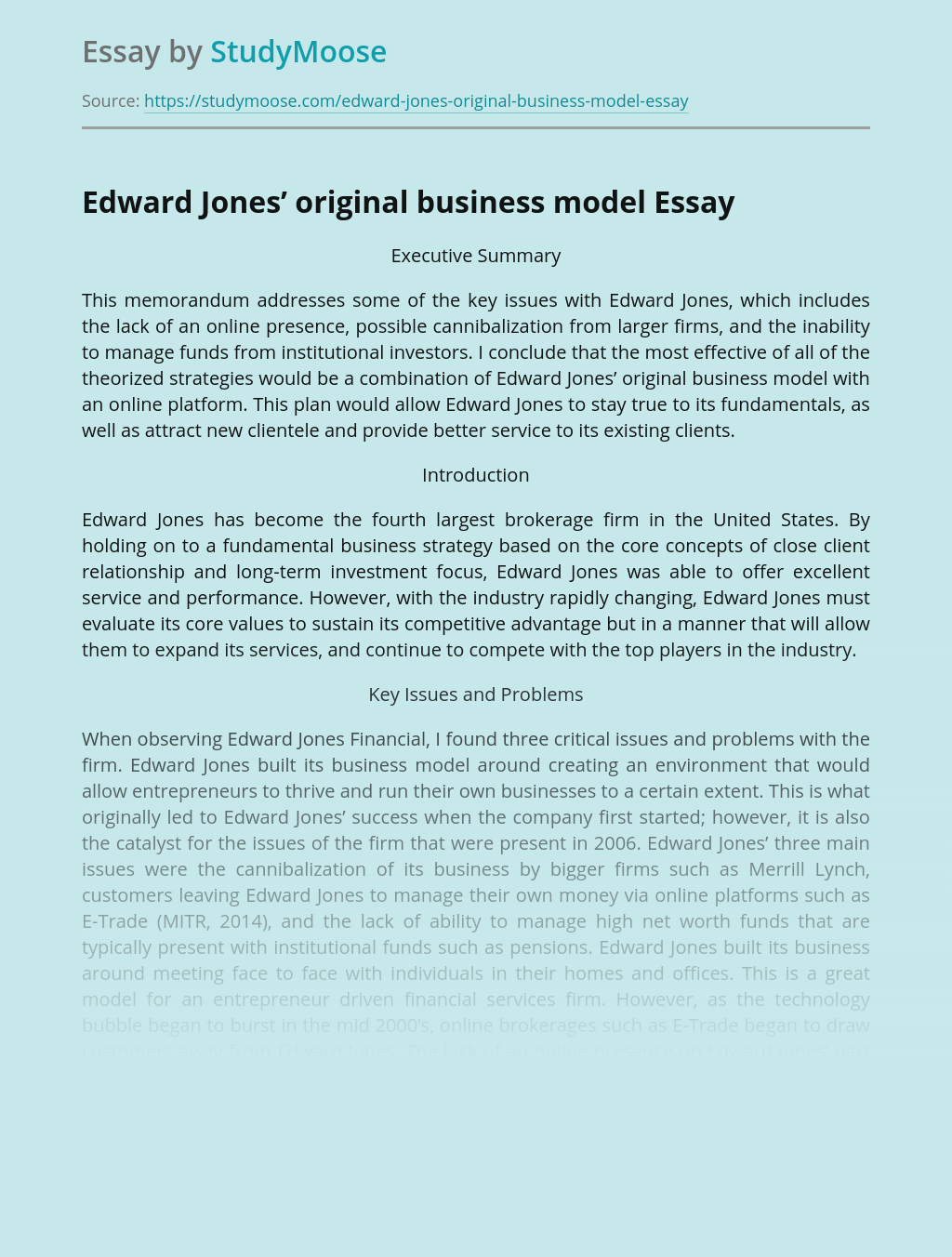 This essay will discuss the Case study by firstly identifying four elements of contract, then justifying duties of Mr. Martin with applying the principles of pre-existing contractual duties. Finally a discussion about part payment of debt and promissory estoppel will be explained. Likewise, this essay will evaluate the knowledge of common law and agency relationship....

Had been very busy lately finishing up on all the marking and a host of other stuff. Why is it that everything has to come together at the same time? Now I have to advise my students on completing their Business Model Assignment. My advise to them: “Do a little bit every day. Don’t wait...

1. Overview of the Business Noodle Express is a noodle shop that offers Healthy Noodles. All the ingredients are prepared fresh and ready to cook. The noodles contain protein, carbohydrates, vitamins and minerals. The way we prepare the noodles is different from the usual way on how it is prepared here in the Philippines. The...

The Go-Giver: A Little Story about a Powerful Business Idea

The Go-Giver – A Little Story about a Powerful Business Concept Numerous people pursue success in the incorrect method. They are motivated by the desire to accomplish fame and fortune. They think the world owes them something. They see success as influence and take advantage of– something that originates from the outside instead of from...

Dear Sir/Madam, Business is an art to me, and how to lead it instead of mechanically managing it is the goal that I have been passionately on its pursuit. So I am the seeker with high degree of interest in studying for Master of Business Administration at the University of Canada West the academic session...

Logo Implemented an enterprise architecture using software package SAP, which enabled them to modularize and standardize the Information systems architecture. Two most Important modules for Logo are Supply Chain management and Product Life Cycle Management. So, the new SAP Implementation of these modules perfectly aligned with the changed business strategy. Inductors also made a drastic...