A person begins to learn from an early age. Often this determines what he will do afterwards throughout his life, therefore it is very important that the education be of high quality. There are notable flaws in today’s education system. One of the most significant drawbacks is plagiarism, because it is becoming increasingly difficult to understand who really worked hard and understands something and who wrote off most of the tasks and only due to this finished training with good grades.

Don't use plagiarized sources. Get your custom essay on
“ Education: Important Role in Human Life ”
Get custom paper
NEW! smart matching with writer

Based on the article ‘Plagiarism Lines Blur for Students in Digital Age’ by Trip Gabriel, we can understand that many students often look for ways to plagiarize less and do not try to improve their own knowledge and skills. At DePaul University, the tip-off to one student’s copying was the purple shade of several paragraphs he had lifted from the Web; when confronted by a writing tutor his professor had sent him to, he was not defensive he just wanted to know how to change purple text to black.

” This is a big problem because students lose their personality.

A second, equally important problem is the inequality between people and their living conditions, because of this problem a lot of talented and capable people do not reveal their potential and go unnoticed. Therefore, methods to improve the education system should first of all include creating conditions under which students will not have a chance to plagiarize, as well as creating conditions under which a quality education will be more accessible to all people.

Under such conditions, the concentration of more qualified specialists will not be concentrated only in popular colleges. Teachers will have more motivation to maintain established and recognized standards. They will be better able to ensure that students do not plagiarize their work. This is an important problem and should be given more attention, because of this, students primarily lose their individuality and ability to think creatively, and these are very important qualities in life for any person and everyone should be able to express their point of view through their own personal experience. Trip Gabriel in the article ‘Plagiarism Lines Blur for Students in Digital Age’ cites an example from a University of Notre Dame anthropologist, Susan D. Blum: Ms. Blum argued that student writing exhibits some of the same qualities of pastiche that drive other creative endeavors today TV shows that constantly reference other shows or rap music that samples from earlier songs.”

One of the more effective ways to eliminate this problem may be to introduce penalties for plagiarism tougher than for poorly performed work because if plagiarism threatens with expulsion, students will not take risks and give out someone else’s material as their own. The second reason why the education system requires change is the frequent disparity between rich and poor. Since 1960, when people paid great attention to the problem of racism in universities, the gap between the academic performance of people of different races has narrowed significantly, but this has led to a widening gap between the rich and the poor. In article by Susan Dynarski ’’ At Elite Colleges, Racial Diversity Requires Affirmative Action” says: In another study, by researchers from the University of Michigan, the imbalance between rich and poor children in college completion — the single most important predictor of success in the work force — has grown by about 50 percent since the late 1980s.’’

According to the same article, when colleges started accepting students based on their scatter, so that to achieve race diversity this did not lead to the expected results, Susan Dynarski says: Affirmative action has come under attack, with college admissions viewed as a zero-sum game : What one group gains, another loses.” That is why, based on parameters such as income or race, there will not be an ideal solution to this problem. One solution can be to eliminate both of these parameters and to introduce general entrance exams of certain high standards.

Also, admission should take into account to a greater extent what kind of performance the children had at school when they were still approximately equal, this should be paid the most attention. So for example, if, when enrolling in a college, only exam results and school performance will be considered, then those who really seek knowledge and self-development in the chosen field will have more chances to enter a good college.

Education: Important Role in Human Life. (2020, May 05). Retrieved from https://studymoose.com/education-important-role-in-human-life-essay 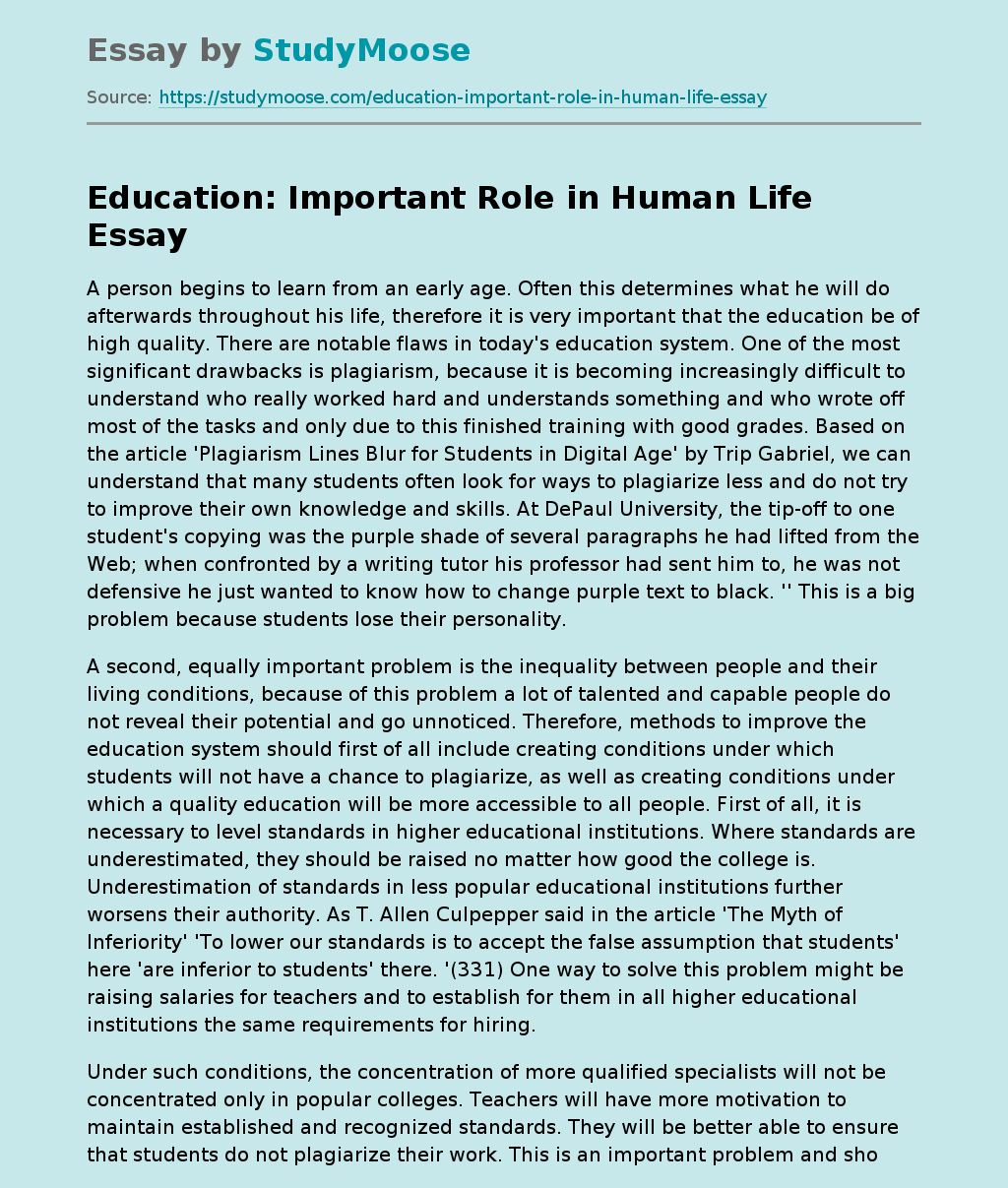