Nowadays, dogs play an important role in humans’ life. Playing with dogs or watching dogs playing is not an unusual thing. Play is defined as voluntary behaviour repeatedly expressed in benign situations, that differs from related functional behaviour (Burghardt, 2005), and is accompanied by a positive affective state (Bateson, 2014). Some articles infer that play is necessary for dogs and it benefits a lot. However, does play only have advantages? Is it always beneficial for dogs to play?

Don't use plagiarized sources. Get your custom essay on
“ Important Role of Dogs in Humans’ Life ”
Get custom paper
NEW! smart matching with writer

They find that play helps a lot. Locksley et al. (2012) made a conclusion that play may be an important factor in sociality, since dogs are capable of extracting social information not only from games in which they participate, but also from games that they observe between third parties. And many researchers believe that play provides important nourishment for brain growth and helps to rewire the brain, increasing the connections between neurons in the cerebral cortex (Bekoff, 2015).

As for the relationship, play may indeed enhance the dog-human bond (Bradshaw et al. 2015), but based on the present research, not all play appears to be equal in its form, its characteristics, and in affect (Horowitz, 2016). For humans, the literature (Lauren Powell et al.,2018) as a whole displays a generally positive association between human oxytocin concentrations and human-dog interaction. Oxytocin is thought to play a role in some of the positive health outcomes associated.

These articles list several benefits of play in dogs.

However, few articles talk about the disadvantages. Maybe the essay is incomplete, or this domain has not been studied. We are not supposed to keep it in mind that play always benefits. We suggest that play is not a reliable, generalizable, positive welfare indicator, but, rather, a heterogeneous behavior which serves different functions (Rebecca et al., 2017).

For dogs, play is an indication of positive welfare and is essential for normal development (Rooney and Bradshaw, 2014). But some results (Toth et al.,2008) show that a small number of dogs have signs of fear or avoidance during playing. Dogs without experiences to play with people are more prone to misunderstanding humans enticement and for lack of clear play signals, they respond showing avoidance or fear.

From this part, we are able to infer that play have positive influence for both bogs and human. Nevertheless, incorrect ways of play or unfamiliar buddies and surroundings may result in fear and other negative emotions. In brief, play can not only bring happiness but also the opposite.

Various studies report between 5 and 29% of dog bites occurring either as a sequel to or during play with the dog (Beck et al., 1975; Szpakowski et al., 1989; Shewell and Nancarrow, 1991; Ashby, 1996; Guy et al., 2001; Maragliano et al., 2007; O’Sullivan et al., 2008). We can infer from the data that some of dog bites are relevant to play. An article (John et al.,2015) also made a conclusion that certain human-canine factors are equally associated with dog bites occurring during and outside of the context of play with the dog. To sum up, though plenty of factors can cause dog bites, dog bites are associated with play. Dogs are more likely to bite when playing. In this respect, play can lead to a negative effects.

In summary, both dog-dog play and human-dog play can positively influence dogs and humans. In addition, play has the potential, with further research, to be used as a probe in the assessment of dog-human relationships (Nicola et al.,2003). Whereas sometimes play indeed result in negative consequences. Play can not be simply thought of as an indication of positive welfare, which depends on several different factors. 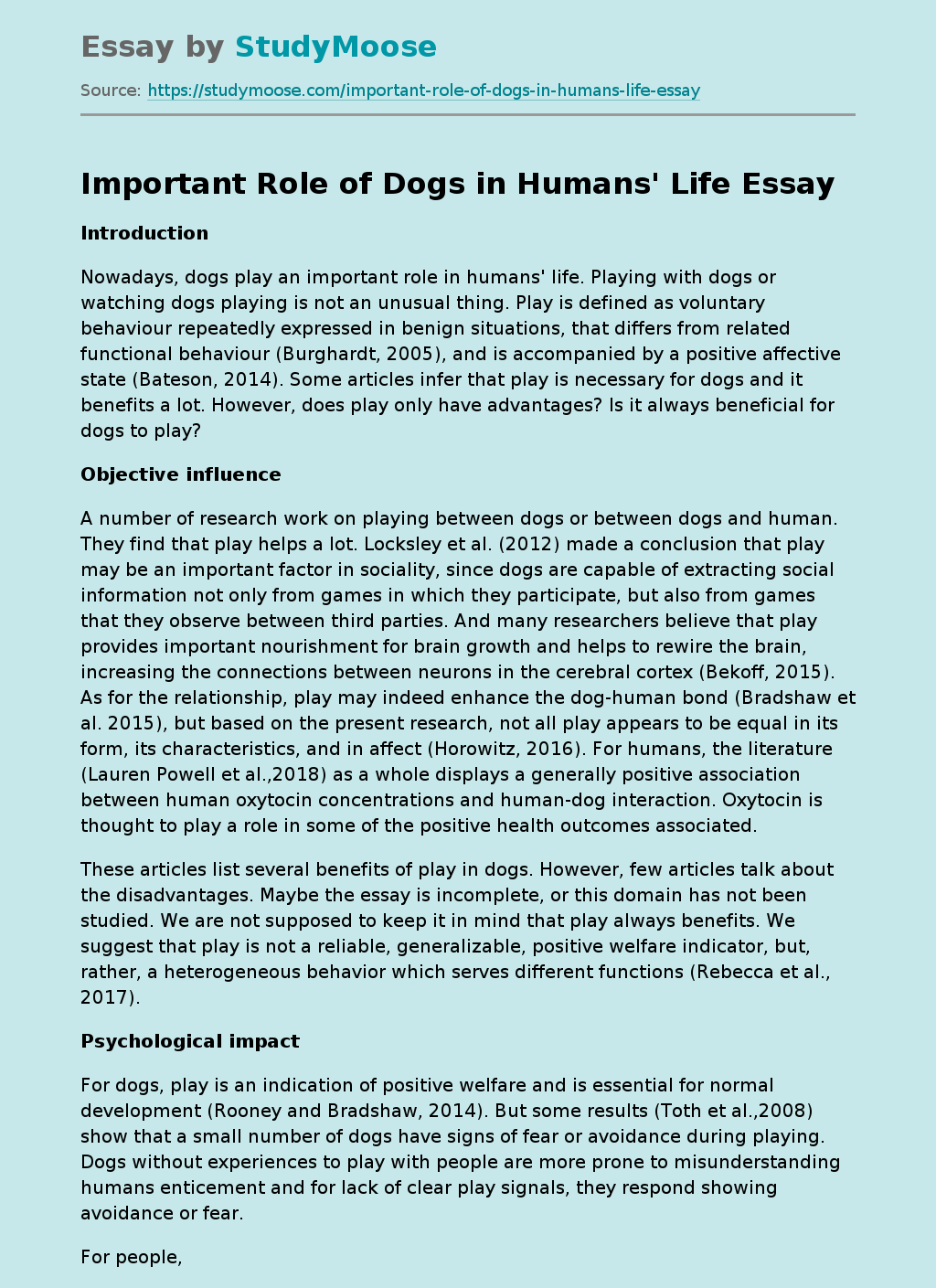