Drama Analysis of The Pursuit of Happiness Movie

In preparing to write my drama-analysis research paper, I encountered a wealth of information regarding my topic: The Pursuit of Happyness, a film which I believe demonstrates a return to “classic” movie-making and also a return to film as inspiration rather than lamentation. In my essay, I argued that, despite certain flaws and tendencies to revision historical relaity, The Pursuit of Happyness is a great film, and potentially one of the most important American films. Arriving at this conclusion was a long and interesting road, which was partially established by the research and writing of the paper itself.

Don't use plagiarized sources. Get your custom essay on
“ Drama Analysis of The Pursuit of Happiness Movie ”
Get custom paper
NEW! smart matching with writer

However, I felt determining my opinions and reinforcing them with information from my research materials was much easier than organizing the paper and expressing my opinions in solid, correctly constructed writing. One approach that I thought would be workable, but which proved to be merely frustrating, was to draw primarily from my own experience and opinions about movies. In my original intention for the paper, I had imagined that I would contrast The Pursuit of Happyness with other films I had seen and contrast, also, the way these various movies made me feel and also what I may have thought about their technical aspects.

When I tried to use these kinds of comparisons in the actual research paper, I felt like what had been so obvious to me, as a subjective movie viewer, would be very hard for others to identify with, unless I expended a tremendous amount of space and energy to explain my personal tastes and opinions.

What seemed to work better than the inclusion of my extended opinions was the citation of otehrs’ opinions. There seemed to be two advantages in citing material which supported my opinions rather than merely offering my opinions themselves.

the first advantage was that i found certain writers expressed my thoughts and ideas just as I would have liked to express them myself. However, because the writers of the articles and essays I cited were professionals, their words were much more succinct and precise than some of my own attempts at saying the same thing. The second benefit of using cited materials was that some of the opinions I cited were, in fact, slightly different “takes” on opinions of mine, and I don’t think i would have necessarily come to understand these slight variations without having done the research.

So, rather than merely supporting my opinions, the research materials actually modified my opinions and sometimes reinforced them very nicely. I felt more confident and determined in my own thesis because I knew authoritative writers from The Wall Street Journal and other professional publications supported some of my views. The only real obstacle I faced with research was whittling down the enormous amount of available information.

I think the Internet has made it easier to conduct wide-ranging research quickly, but that in itself makes it much more difficult to sift through all of the available information and pinpoint what will be useful in support of the research paper in question and its thesis. Defining my thesis itself was also challenging. The more I thought about stating my argument simply and directly in a single sentence or a couple of sentences, the less the whole idea seemed meaningful at all. I learned as I continued to work at defining my thesis that it is important to get everything set in a single direction.

I’m not sure if I was actually successful in presenting a sharp, simple thesis, but I tried very hard, Essentially, I wanted to show that The Pursuit of Happyness is a good film and one which also returns film-making to a role which it has steadily abandoned over the years in America: that of inspiring people. I believed that the thesis statement is true and feel it is true,. but I found that making my points in writing and spelling them out logically, as well as addressing counter-arguments forced me to reconsider my solidly constructed beliefs.

Even though my overall opinions did not change very much, my respect for the logical formation of written arguments grew steadily as I worked on my own paper. Just as it is important to think simply in many way to secure a good thesis for a research paper, it seems important tow rite simply, as well. That is, I think it is important to stay on topic and make your argument point by point rather than digressing or getting too far off of track, no matter how tempting it is to launch into extra thoughts and associations. Even paragraph by paragraph, I think, all of the sentences should be necessary and feed into one another.

I wasn’t as aware of this fact before spending time on the drama-analysis research paper. In addition to learning valuable steps and techniques for writing and thinking, the process of writing the paper caused me to re-examine the methods or logic by which I arrive at my opinions in the first place. I think that;s the most important thing I leaned in composing my research paper: that the logic and “formal” thought that goes into writing a good research paper differs widely from the “looser” thoughts and associations which typically help define at least my own subjective opinions.

I’m not sure IO was aware of just how different my “everyday” thoughts and logic were from those which are necessary to present a clear, convincing argument which is backed up by solid evidence. In the long run, I feel certain that I could now make, as a consequence of my experience in writing the research paper, a much stronger argument on behalf of my original opinions.

Drama Analysis of The Pursuit of Happiness Movie. (2016, Aug 16). Retrieved from https://studymoose.com/drama-analysis-of-the-pursuit-of-happiness-movie-essay 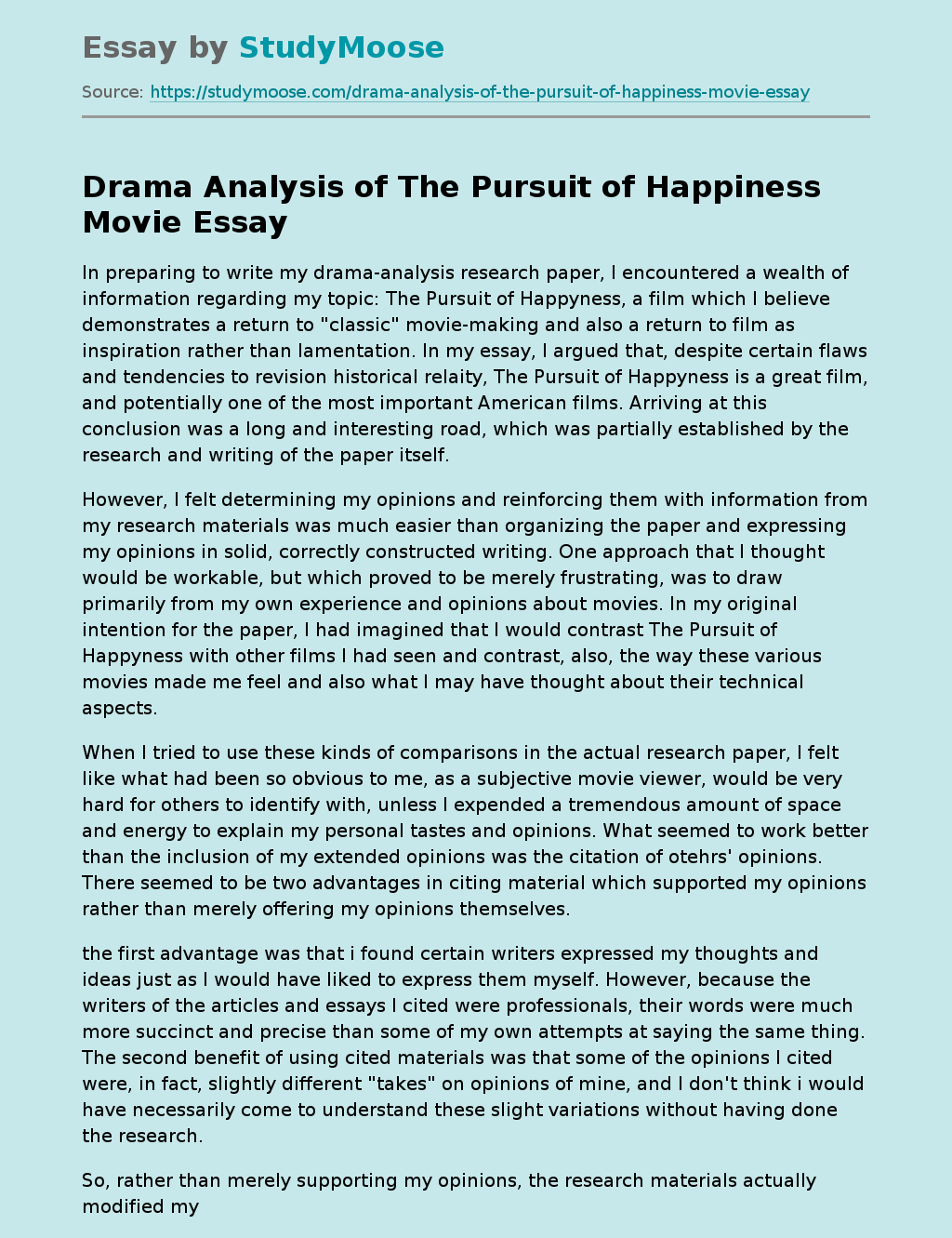