Don't use plagiarized sources. Get your custom essay on
“ Dr. Sarvepalli Radhakrishnan: The Great Teacher ”
Get custom paper
NEW! smart matching with writer

Sarvepalli Radhakrishnan. One of India’s most influential scholars of comparative religion and philosophy, Radhakrishnan built a bridge between the East and the West by showing how the philosophical systems of each tradition are comprehensible within the terms of the other. He wrote authoritative exegeses of India’s religious and philosophical literature for the English-speaking world. His academic appointments included the King George V Chair of Mental and Moral Science at the University of Calcutta (1921–1932) and Spalding Professor of Eastern Religion and Ethics at Oxford University (1936–1952).

Radhakrishnan was awarded the Bharat Ratna, the highest civilian award in India, in 1954. Among the many other honors he received were the British Knight Bachelor in 1931 and the commonwealth Order of Merit (1963), but ceased to use the title “Sir” after India attained independence. His birthday is celebrated in India as Teachers’ Day on 5 September. He was also awarded the Templeton Prize in 1975 in recognition of the fact that “his accessible writings underscored his country’s religious heritage and sought to convey a universal reality of God that embraced love and wisdom for all people”.

In April 1909, Sarvepalli Radhakrishnan was appointed to the Department of Philosophy at the Madras Presidency College. Thereafter, in 1918, he was selected as Professor of Philosophy by the University of Mysore, where he taught at its Maharaja’s College, Mysore. By that time he had written many articles for journals of repute like The Quest, Journal of Philosophy and the International Journal of Ethics. He also completed his first book, The Philosophy of Rabindranath Tagore. He believed Tagore’s philosophy to be the “genuine manifestation of the Indian spirit”.

His second book, The Reign of Religion in Contemporary Philosophy was published in 1920. In 1921 he was appointed as a professor in philosophy to occupy the King George V Chair of Mental and Moral Science at the University of Calcutta. He represented the University of Calcutta at the Congress of the Universities of the British Empire in June 1926 and the International Congress of Philosophy at Harvard University in September 1926. Another important academic event during this period was the invitation to deliver the Hibbert Lecture on the ideals of life which he delivered at Harris Manchester College, Oxford in 1929 and which was subsequently published in book form as An Idealist View of Life. In 1929 Radhakrishnan was invited to take the post vacated by Principal J. Estlin Carpenter at Harris Manchester College. This gave him the opportunity to lecture to the students of the University of Oxford on Comparative Religion.

For his services to education he was knighted by George V in the June 1931 Birthday Honours, and formally invested with his honour by the Governor-General of India, the Earl of Willingdon, in April 1932. However, he ceased to use the title after Indian independence, preferring instead his academic title of ‘Doctor’. He was the Vice-Chancellor of Andhra University from 1931 to 1936. In 1936 Radhakrishnan was named Spalding Professor of Eastern Religions and Ethics at the University of Oxford, and was elected a Fellow of All Souls College. In 1939 Pt. Madan Mohan Malaviya invited him to succeed him as the Vice-Chancellor of Banaras Hindu University (BHU). He served as its Vice-Chancellor till January 1948. When India became independent in 1947, Radhakrishnan represented India at UNESCO (1946–52) and was later Ambassador of India to the Soviet Union, from 1949 to 1952.

He was also elected to the Constituent Assembly of India. Radhakrishnan was elected as the first Vice President of India in 1952. He was elected as the second President of India (1962–1967). When he became President, some of his students and friends requested him to allow them to celebrate his birthday, 5 September. He replied, “Instead of celebrating my birthday, it would be my proud privilege if 5 September is observed as Teachers’ Day.” Since the time we have been civilised education has become part of our life and after the parents in home our teachers in school ,colleges take care of us. They are emotionally attached to us. It is our prime duty to obey them with great gratitude. Not only one day in a year; but also in each moment we should behave gently and respect our teachers. Teachers also should follow the ideals of great teacher Radhakrishnan. A good teacher is one who is always ready to share his knowledge to his disciple with love and like a friend. 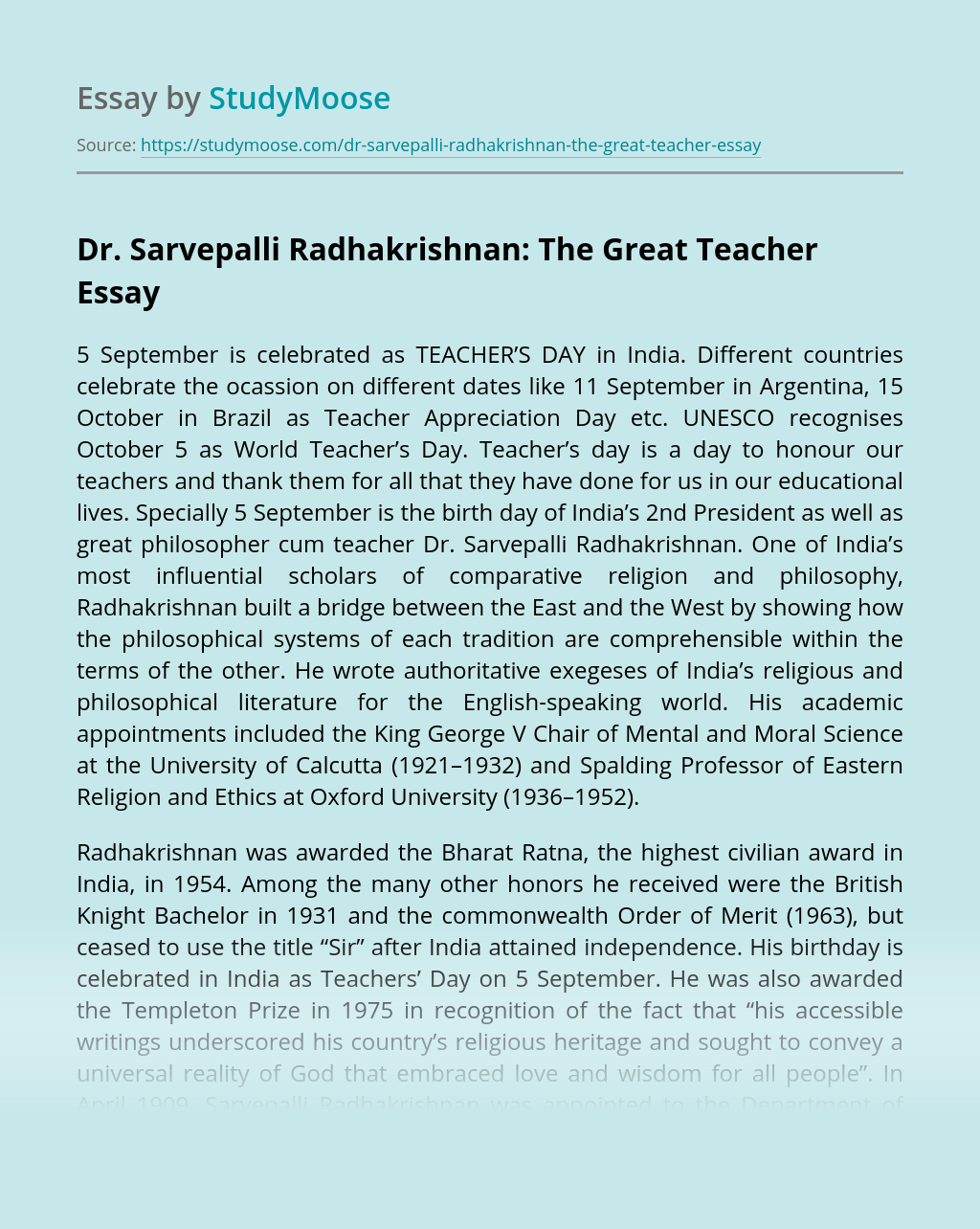