Down and Out in Paris and London

A review of Orwell’s “Down And Out In Paris And London”, illustrating the author’s experience with tramps and poverty in Paris and London in the 1920’s.

“Down And Out In Paris And London” The story of “Down And Out In Paris And London” deals with the author’s experience with tramps and the poverty stricken in Paris and London in the 1920’s. He lives with them on equal terms and suffers the same hardships and tribulations. Orwell shows great compassion for the plight of the poor and feels that society is very unfair in their criticism and judgment of the tramps and beggars that roam the streets.

Don't use plagiarized sources. Get your custom essay on
“ Down and Out in Paris and London ”
Get custom paper
NEW! smart matching with writer

He feels that these people are victims of their circumstances. To be belligerent towards tramps is no fairer than to be that way towards invalids and the handicapped, in that they are that way not because they want to be, but because of their circumstances. In this essay we will explore the characteristics and personality of a person who lives below the poverty line.

Through the author we get a very keen insight into this area of human experience. Orwell feels that beggars and tramps have unfair labels and stereotypes attached to them. For example, most people think of tramps as being dangerous. About that Orwell says: “Quite apart from experience, one can say a priori that very few tramps are dangerous, because if they were dangerous they would be treated accordingly. A casual ward will often admit a hundred tramps in one night, and these are handled by a staff of at most three porters.

A hundred ruffians could not be controlled by three unarmed men. Indeed, when one sees how ramps let themselves be bullied by the work house officials, it is obvious that they are the most docile, broken-spirited creatures imaginable. “(p. 204) About the term “drunkard” Orwell disagrees also saying: “Or take the idea that all tramps are drunkards an idea ridiculous on the face of it. No doubt many tramps would drink if they got the chance, but in the nature of things they cannot get the chance. At this moment a pale watery stuff called beer is seven pence a pint in England. To be drunk on it would cost at least half a crown, and a man who can command half a crown at all often is not a tramp.” (p. 204) I am not sure that I necessarily agree with this… I do not believe that all tramps are dangerous. I do believe that when one reaches such a desperate level of poverty that he would be tempted to do unscrupulous acts to alleviate his situation. As for all tramps being drunkards, I would not say all, but I do think there is a segment of these people (as there are in any social level) of those who live to drink. There are those who will use whatever handout they get to satisfy this need to drink. Orwell believes that poverty frees people from ordinary standards of behavior, that they take on rather eccentric characteristics and give up trying to be normal. Having lived the life of poverty he discusses the redeeming features of poverty the fact that it annihilates the future. In other words, without money, one does not need to think about the future and just take one day at a time. Orwell says: “Within certain limits, it is actually true that the less money you have, the less you worry. When you have a hundred francs in the world you are libel to the most craven panics. When you have only three francs in the world you are quite indifferent; for three francs will feed you till tomorrow, and you cannot think further that that.” (p. 16) He says that another feeling associated with poverty is a feeling of consolation. Somewhat of a relief that you have finally reached the stage of being down and out and are surviving. Another idea is that people tend to think that poor people are fundamentally different from the rich, as if they are another race. Not true, says Orwell In reality there is no such difference, that the rich and poor are different only by their incomes. He expresses this by saying: “The average millionaire is only the average dishwasher dressed in a new suit.” (p. 121) Orwell discusses the powerful effect that one’s clothes has on one’s personality and how they affect how one is perceived. Once one puts on the clothes of a tramp, Orwell discovered, one is put in an entirely different world. To begin with, one feels degraded and shameful and one is treated the same way. People react to you differently and women especially have a strong reaction to a man’s clothes. “When a badly dressed man passes them they shudder away from him with a quite frank movement of disgust, as though he were a dead cat.” (p. 130)Orwell compares the feeling of the first day in tramps’ clothes to being in a jail cell saying “You might feel the same shame, irrational but very real, your first night in prison.” (p. 130) I certainly felt that after reading George Orwell’s experiences in “Down And Out In Paris And London” that I have a better understanding of people who live at this level of society. I have probably been too quick to brush them off and attach a certain stereotype to them. Now I understand better their circumstances and their way of thinking. The Author explains the personality of a beggar or tramp and I can definitely sympathize more. As George Orwell said “That is a beginning” (p. 216)

Down and Out in Paris and London. (2020, Jun 02). Retrieved from https://studymoose.com/down-and-out-in-paris-and-london-new-essay 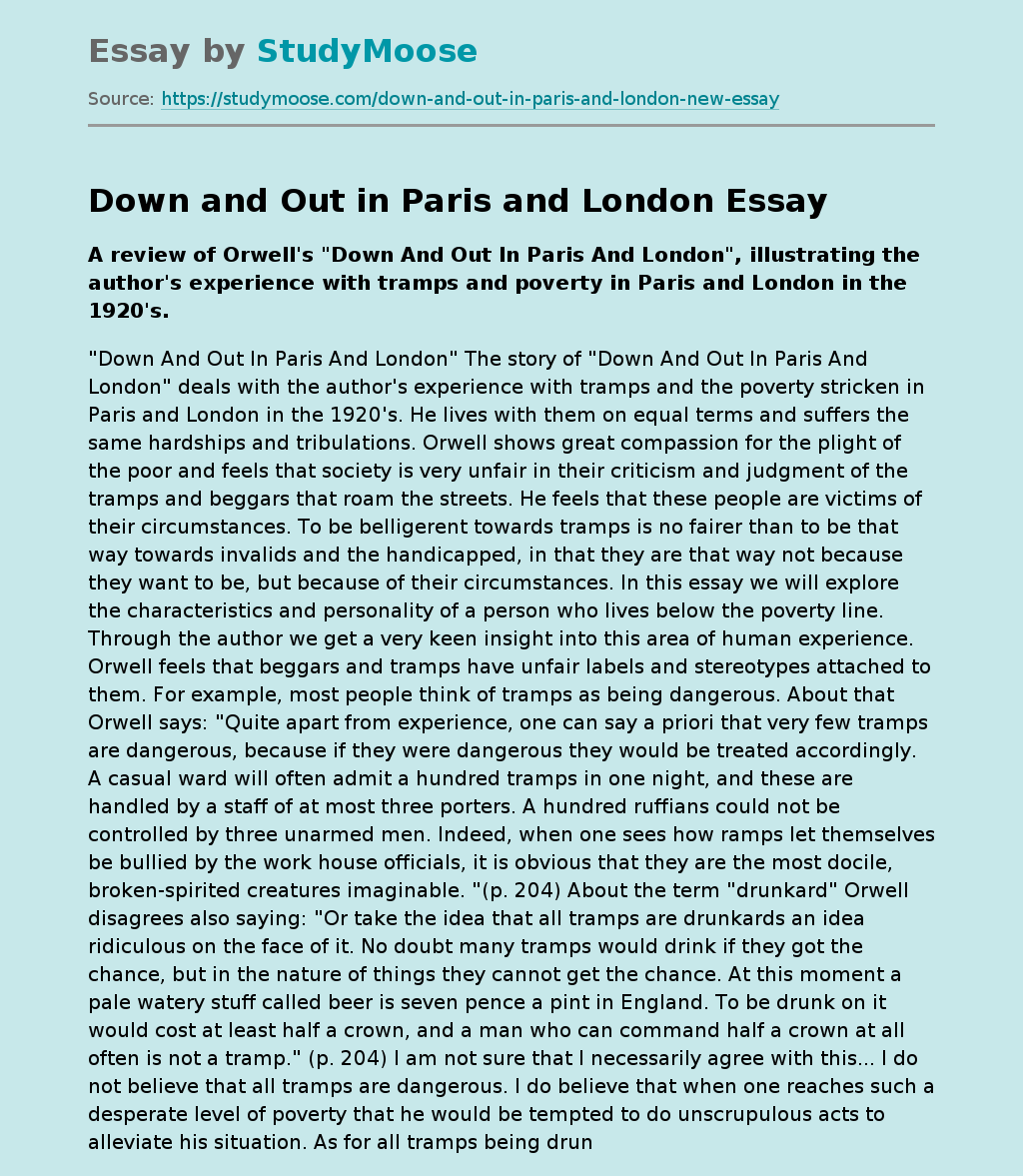