‘As when come stalled horse who has fed full at the manger breaks his halter and gallops thudding across the plain, eager for his usual bathe in the lovely flow of a river, and glorying as he runs. He holds his head high, and the mane streams back along his shoulders: sure of his own magnificence, his legs carry him lightly to the haunts where the mares are at pasture. ‘ (Iliad 6. 502-511 and 15. 263-270) A simile Homer uses twice, the first time to describe Paris, the second time to describe Hektor.

Don't use plagiarized sources. Get your custom essay on
“ A simile Homer uses twice, the first time to describe Paris, the second time to describe Hektor ”
Get custom paper
NEW! smart matching with writer

In what ways in its immediate context is each use of this simile appropriate to the character and the situation it is illuminating?

Consider more generally the differences between Hektor and Paris as individuals and then come back to consider why Homer might have chosen to link them in this intriguing way. In Homer’s ‘The Iliad’ the presence of the simile used to describe the Trojan Princes, Paris in Book six and Hektor in Book fifteen, draws the readers mind to the sharp contrast between both the temperament and mannerisms of the brothers.

Its use in relation to the two brothers, consequently enables one’s mind to question why Homer would categorise two such dissimilar persons in exactly the same way.

To assume that it is due simply to their blood-bond is entirely too obvious an assumption when considering the diversity and mystique found within Homer’s works. It is clear throughout the poem, when comparing Paris and Hektor, that the ideals, morals and attitudes of one brother is an almost complete contradiction to that of the other brother.

Where Hektor is the Warrior, forever bound by the ‘hero’s code’; by duty and honor, Paris is the Lover, bound only by his own wants and needs, by his vanity and his love for Helen. These differences n personal values are arguable the main sources of the tension and resentment that flourishes between the brothers throughout the progress of ‘The Iliad’. Paris is the beautiful, charming, often womanizing, Trojan Prince; he is the son of Priam, King of Troy, and brother to Hektor, heroic warrior Prince of Troy.

Paris is essentially the catalyst of the Trojan War and therefore consequently the fall of Troy. His abduction of Helen – Queen of Sparta and wife of Menelaos- although implemented by the goddess Aphrodite, capitulated the Trojans into the tragically doomed ten year long war against he Greeks. Paris’ personality resembles that of a spoilt child, he endeavors to acquire everything he wants and desires regardless of the consequences. Even though after he has abducted Helen and it is clear that through his actions he will bring discord and danger to Troy, he refuses to return her to Menelaos. It is Paris’ love -or lust- for Helen, as well as his own vanity and inclination towards safety and luxury rather than honor and glory, which clouds Paris’ conscience when considering his refusal to fulfill the responsibilities he owes to his country as a Prince of Troy.

Although Paris is an accomplished archer, the bow and arrow are considered the weapons of cowards and not as masculine as either the sword or spear and he lacks the spirit for battle, preferring to stay in his chamber and make love to Helen while others are sent out to fight for him. This latter attribute earns him the scorn of both Helen and Hektor. Paris’ outward show of bravery at the beginning of book three when he is seen challenging the Greeks to “fight him one to one in grim combat”1 is belied by hid lack of courage when he sights Menelaos across the battlefield; so godlike Alexandros slipped back into the body of the proud Trojans in his fear of Atreus’ son. “2 Paris’ immediate and cowardly retreat into hiding behind the strong ranks of the Trojan army is a shameful and embarrassing act to be preformed by a man of such defined royal blood. Hektor is Paris’ parallel in both personality and dispostion.

He is a paragon for everything Homeric Hero’s stand for; he is courageous, loyal and fearsome and seeks to claim both honor and glory. But unlike his major adversary Achilleus, he is not completely void of motion and does not feign indifference or superiority to the people who surround him. Hektor is not only a commanding and impressive leader of the Trojan forces but also a devoted husband and father, who is capable of expressing compassion and affection when dealing with his wife and family.

The scene in book six where Hektor unknowingly informs Andromache of the fate which will befall not only her, but also himself and their infant son Astyanax, is one of the most moving moments in the whole poem. Hektor’s speech to his wife not only shows the reader the strength of Hektor’s love for his family ut also gives insight into the extent of which Hektor is a prisoner of the ‘Hero’s code’. “But I would feel terrible shame before the men of Troy and the women of Troy with their trailing dresses, if like a coward I sulk away from the fighting.

Nor is that what my own heart urges, for I have learnt always to be brave in the forefront of the Trojans, winning great glory for my father and for myself. “3 Hektor’s devotion to duty is proved beyond doubt when he denies Andromache’s passionate pleas for him not to return to battle and chooses the prospect of an honorable death over the temptation of living hrough retreat. It is his ability to make this decision that makes Hektor a man who will surpass mortality and, like Achilleus, live on in the glory of legend.

When we first read the simile in Book Six, Homer compares Paris to magnificent horse that has broken free of his restraints and is galloping free, a vision of strength and beauty. This description does seem suited to Paris, for despite his faults he is indeed impressive in both beauty and physical strength. The words, “sure of his own magnificence, his legs carry him lightly to the haunts where the mares are at pasture. ‘4 are extremely accurate hen thought of in relation to Paris, as this is how he has been presented to the reader throughout the poem; as a man of impressive good looks who possesses an unquenchable desire for women. However when the same simile is used in comparison to Hektor, the same reasoning can not be applied. The reader does not see Hektor as a man of beauty and charm, nor as a great lover. He is a husband, a father, a prince and a warrior. One acquires a feeling of renewed strength and determination when reading this simile in relation to Hektor.

It is not Hektor’s beauty or physical impressiveness that gives him the onfidence to charge back into battle, but the renewed energy infused upon if by the god Apollo. It is not only physical power and strength that causes Hektor to exude magnificence but also his renewed inner strength and courage along with the banishment of any thought of defeat from his mind. It could be said that it is the confidence, which had so recently been instilled in both Paris and Hektor at the time their comparisons in the each use of the simile were made, that forms a connection between the two and gives a reason as to why Homer would use the same words to describe these two contradicting en.

After contemplating the context in which each use of the simile is put forward by Homer, it can be said that the simile was indeed appropriate to each character and situation it illuminated within ‘The Iliad’. Despite their obvious and dominating differences, it is the confidence in themselves and their worth that Paris and Hektor share at the time of their separate comparisons and the embodiment of power and strength which they each possess, that for a brief period in time, make the two individuals, usually poles apart, essentially the same. 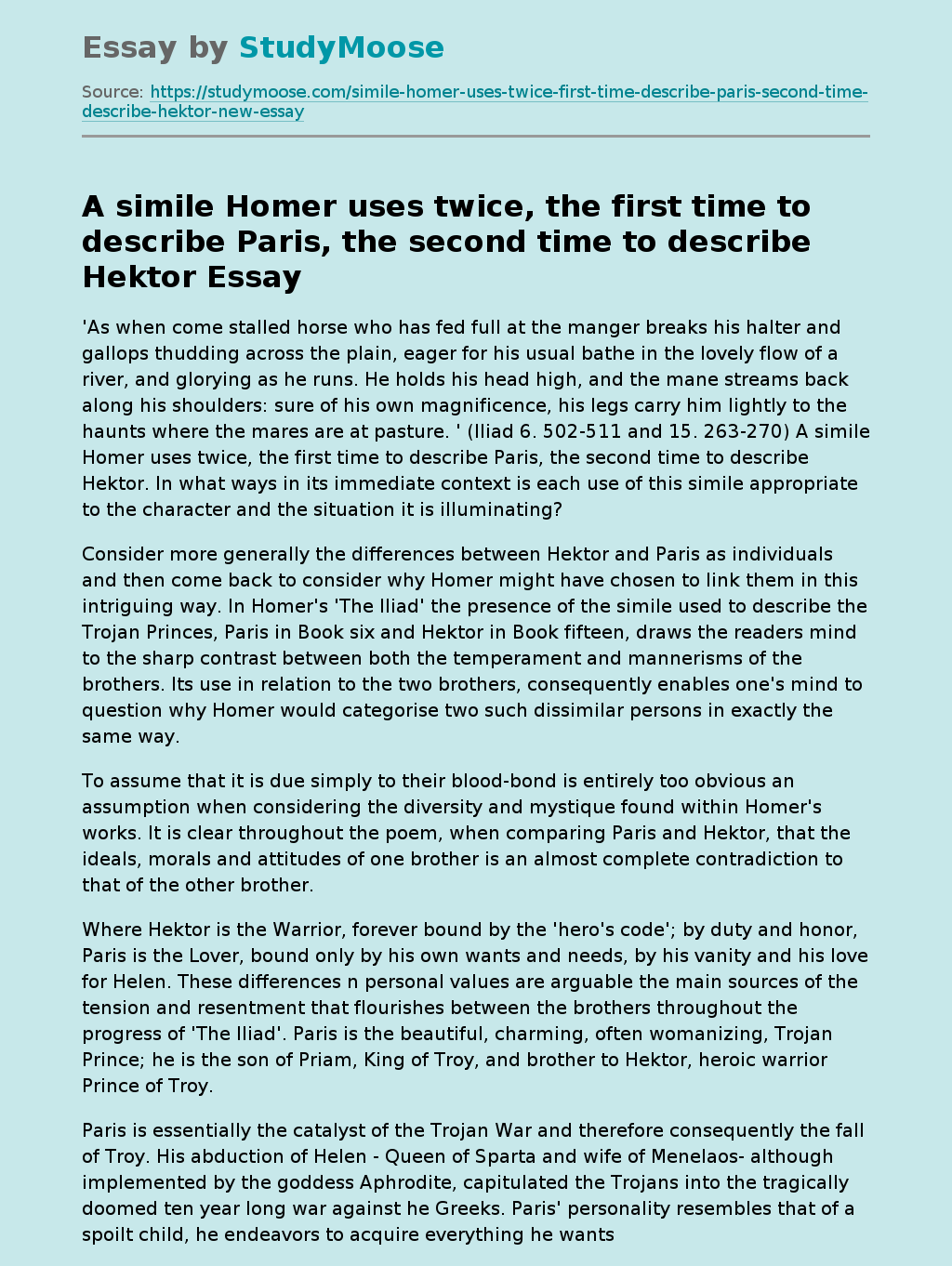