Romeo and Juliet: Heroes and Villains

In this essay I will be exploring two different characters in this play (Lord Capulet and Paris), and will be deciding whether Shakespeare was using certain techniques to portray these two characters as villains or heroes, depending on the devices used. From the beginning of the play, the overall character portrayed by Shakespeare of Lord Capulet fluctuates greatly. In Act 1 Scene 1, the first thing which Capulet says is “What noise is this? Give me my sword, ho!” This opening to a new character, at the start of the play is an unexpected one, as the play already has tension before it has begun.

Don't use plagiarized sources. Get your custom essay on
“ Romeo and Juliet: Heroes and Villains ”
Get custom paper
NEW! smart matching with writer

The demanding, short sentences which Capulet uses shows him to have a sense of authority and power. The first thing which he asks for is his sword. This shows him to have a violent persona, and a combination of these characteristics is not what an audience would want. This can build up to an immediate dislike for Capulet; however, it could also show heroism, The fact that Capulet, an old man, is willing to fight against youthful, shows his eagerness to defend his family.

Lord Montague also does this, however, and suggests that Capulet’s actions are not so heroic, and possibly just adds to the worsening of the families’ feud. In scene two, of the same act, Capulet thinks of the previous arguments between the families.

While in conversation with Paris, (prospector in marrying Juliet), he says; But Montague, is bound, as well as I, in penalty alike, And ‘tis not hard, I think, for old men as we to keep the peace.

This quote shows Capulet to be contemplative of the peaceful manner in which both families should be living. Not only does Capulet realise the authority of Prince Escalus, but the word “bound” shows that Capulet has little choice in the matter. “As well as I”, “alike” and “we” shows the similarity between Capulet and Montague, though they tend to think themselves differently. The word “we” shows their distant unity. However, the fact that they are so “alike” in their penalties, implies that this is the only reason why Capulet considers peace, as the blame was passed on them equally. If the blame was passed on Capulet more that Montague, the conversation of peace would have arisen. Not only this how controversial the word “peace” is but also how hypocritical and irrational Capulet is. These thoughts are constructed by Shakespeare carefully. The frequent use of commas conveys contemplation, and careful thinking. There are two pauses, represented by commas, either side of the phrase “I think”, and shows that resolving to peace is conditional, but not certain. The fact that, only the punishment of Montague might cause the only form of submission to peace shows villainy.

Moreover, the contrasting ways in which Capulet treats his daughter is controversial, and a call for inspection. While speaking to Paris, Capulet describes Juliet as the “lady of [his] earth.” The word “earth” links both to astrology, and to the fact that Capulet seems to be living in his own world. Mostly, it shows Capulet to have a lack of hope in the world, where Juliet to carry on the family name and legacy. Hence is eagerness for Juliet to be married. The fact that is eager shows that he is selfish in his hope, but may also mean that he wants the best for his daughter, hence his willingness to wait. It is very important to marry Juliet into another aristocratic family; therefore, it is in Capulet’s interest to marry her successfully. Though he may mean well by his daughter, Capulet can also be abnormally abusive. In Act 4 Scene 2, Capulet states, in context to Juliet’s marriage that he will have “this knot knit up by tomorrow morning.” This quote suggests many different aspects of Capulet’s villainy. Firstly, Capulet talks of sealing the marital contract, without Juliet’s consent or free will. This adds to his forceful character, and intimidating persona as a person.

The continuation of his family rests entirely on the success of this marriage, and Capulet’s self-centredness seems to emanate strongly from this. The fact that Juliet is forced, shows the antithesis between men and women in Shakespearian times, and amount of authority a person held depending on their gender and status. Secondly, the phrase “knot knit” suggests the physical bondage of Juliet is she chooses to retaliate. This shows Capulet’s abusive character. It also implies that he does not think of Juliet as more than a child because he has to tie her up to make her follow orders. The physical harm of Juliet shows that Capulet does not respect women. It also may be the reason that Lady Capulet had Juliet at such a very young age, and did not bond with her at all. Thirdly, the phonology of the phrase “knot knit” is an unpleasant one. The harsh sound that it holds may have been used by Shakespeare to show authority, menace and villainy. This use of alliteration would cause the dislike of Capulet from the very way the use of the alliterated “kn” sounds.

All in all, I think that Shakespeare’s overall villain portrayal of Capulet is that of a villain. The second character which I would like to discuss during this essay is Paris, the son of Prince Escalus and the suitor of Juliet Capulet. For me the overall depth in which Shakespeare goes into about this character is very shallow, and ads to the mystery of who he really was. At first, Paris is introduces as a polite young gentleman. In Act 1 Scene 2, he asks Lord Capulet, “What say you to my suit?” From this question, it is a clear fact that Paris has consulted Capulet about Juliet before, if not more than once. From any basic inference, it is clear that Capulet has postponing the marital ceremony for a good many years, for an unknown reason. The way in which only the father of Juliet is being consulted and not Lady Capulet suggests that Lady Capulet has had little decision in the person that her daughter marries. This means that the audience has landed into an internal family problem. This portrays Paris to be a villainous character. The fact that Paris keeps on asking to marry Paris, suggests that he may be thinking of how is represented in the public since he has no wife. Later towards the end of the play in Act 5 Scene 3 Paris says to Romeo:

If thou me merciful,
Open the tomb, lay me with Juliet.

Paris also shows a sense of egotism. The passionate proclamation of his death seems almost a piteous cry. Shakespeare uses the word “O”, to show both pain and anguish, but shock. The proclamation mark also shows this. Here Paris could be stating his death to evoke pity from the audience and/or to show the sadness that he feels about his death. This quote also shows Paris to be a selfish and greedy person, up to his last breath. Paris would have been aware at this moment that Romeo and Juliet were in love; however his last wish is for Romeo to “open the tomb” of his lover and lay him (Paris) in it instead. This implies that Paris intends to succeed in his marital union with Juliet, but eternally, in her grave, and maliciously chose her true love to do the deed. Though Juliet’s betrothal kept Romeo from loving her, Paris wishes intends to keep them apart forever. This shows Paris to be a villainous character, as not only does he think of his selfish desires, but decided to ignore the intangible love between Romeo and Juliet to suit his selfish needs.

The fact that Paris asks for the mercy of his killer shows forgiveness and heroism. He politely asks “If thou be merciful”, which shows a sense of desperation and hope, especially as the comma almost shows that he is waiting for permission. It also shows that Paris was not badly tempered or murderous like Tybalt. He plays the unwanted lover. Shakespeare uses this polite language to show a contrast to what both the audience would think of his character, and the social conventions of a prince. Though Romeo comes from and aristocratic family, he is still under banishment; therefore he is in fact of lowered status. For a prince of hierarchy to ask for the mercy of an estranged citizen is beyond conceivable. This portrays Paris as a heroic character.

Finally, this quote shows Paris to be heroic in two ways. Firstly, he did not call for the immediate removal of Romeo or his execution as a banished citizen, which he should have rightly done, especially being Prince Escalus’ son. Secondly he talks of his love for Juliet and nothing else even as he dies. The use of commas, shows his last breaths, as Shakespeare breaks up the sentences to show that he can barely speak, because of the near presence of his death. The fact that Paris does not look to put Romeo into legal trouble is extremely heroic. With all said, I think that the villainous and heroic in Paris, portrayed by Shakespeare shows him to be a neutral character. Concluding, from the two characters that I have analysed, I personally think that Shakespeare uses both the social conventions of his time, and different devices in the text to portray a character as a hero, a villain, or plainly natural.

Romeo and Juliet: Heroes and Villains. (2016, Mar 13). Retrieved from https://studymoose.com/romeo-and-juliet-heroes-and-villains-essay 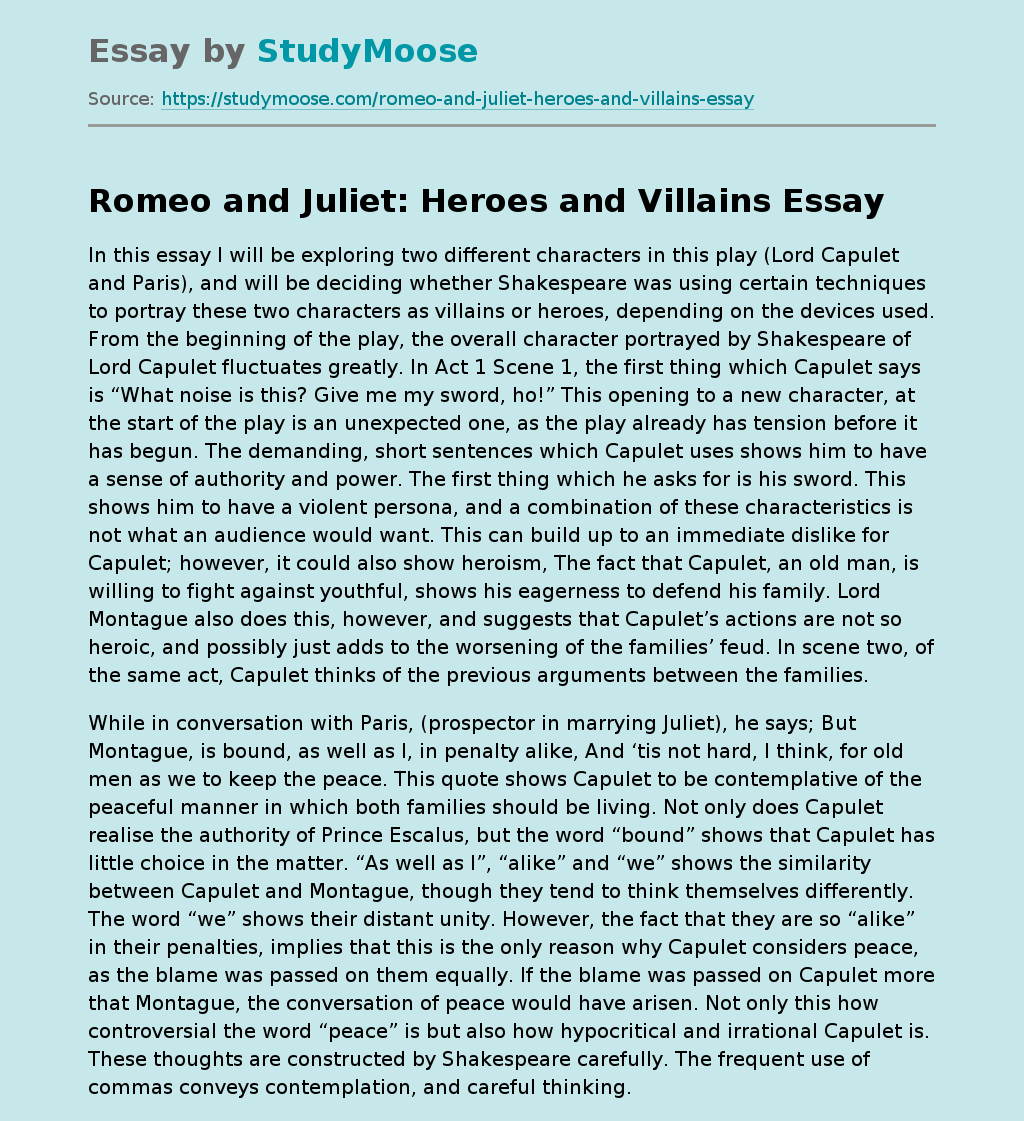