In a democratic nation, it is the citizens who hold the right to elect their representatives and their governing authorities. According to a common observation, not all the citizens are fully aware of the political scenario in their country. The common masses may not be aware of the political issues in society. This may result in people making the wrong choices during election.

As the government is subject to change after every election term, the authorities may work with a short-term focus.

Turn in your highest-quality paper
Get a qualified writer to help you with
“ Disadvantages of Democracy ”
Get high-quality paper
NEW! AI matching with writer

As they have to face an election after the completion of each term, they may lose focus on working for the people and rather focus on winning elections.

Another disadvantage of democracy is that mobs can influence people. Citizens may vote in favor of a party under the influence of the majority. Compelled or influenced by the philosophies of those around, a person may not voice his/her true opinion.

Every form of government is bound to have some shortfalls.

Different people have different views about the various political systems. The advantages and disadvantages of any political system have to be weighed carefully in order to arrive at any conclusion. Why democracy

A functioning democracy is the form of government that provides its citizens with the most freedom, the most opportunity, the greatest prosperity, and the most comfortable life. It is also the most stable form and by far the most fun. In a democracy you can choose precisely the religion that is most meaningful to you, and you can choose your spouse and your education.

You can listen to any kind of music, and you are free to watch any movie and read any book that you like. You can move around freely and you do not have to ask anybody for permission to do so. You can also choose freely what kind of clothes you wish to wear. If you belong to a minority, you are protected against assault and infringement, and you have exactly the same right to go into politics and influence society as anybody else. If you are a woman, you have by law the same rights and opportunities as a man.

Your father, your brothers, your cousins, your uncles, or your husband have no right to rule over you. You have the same right to education, training, and work, and you have the same opportunity for a free and a great life as boys and men have. You also have the legal right to make decisions regarding your body and to say “no” to sex if you do not desire it, even in marriage. You and all others are equal before the law, you have the right within legal limits to say and write what you want short of slander and libel, and you can meet freely with anybody. You can live without fear of the authorities. The same goes for your children and your extended family. In plain words: Democracy gives you the right to liberty, equality of opportunity, and safety, and the opportunity to earn and keep your own money and to have fun.

The desire for freedom and security is in every one of us, and so is the need to have fun. Without those three things, we cannot live a happy and meaningful life. The need for equality of opportunity is a little more problematic than the other needs, since many of us would like to be a little better off than our fellows. But equality of opportunity is a prerequisite for democracy too, and it is worthwhile, as it helps to guarantee freedom, safety and fun. Therefore, democracy is not only important, it is vital! Simply because we’re all human, we all deserve to live in a democracy that works. Why democracy is better than other form of gov.

It grants us many things.
1.Right to speech.
2.Right to information.
3.Right to vote and etc.
It represents each and every citizen equally whether you are poor or you are rich. In a monarchy or dictatorship no one can say or present their point of view. They have to follow what a single man says but in democracy we have been granted by RIGHT TO SPEECH. Report Post

1. Freedom
2. Democracy represents the views and notions of all the citizens of the country, whether majorities or minorities.
3. It helps in solving conflicts and quarrels in a better way.
4. It provides a dignity to the people.
5. Democracy allows various people to rule the country through the representatives.
6. It also allows people to express themselves clearly and freely.
7. It Respects & promotes Human Rights
8. In this form of government all people are equal before the law.
9. Democracy is the only form of government where the people can voice their opinion.
10. In my view there is no other alternative form of government better than a democracy. 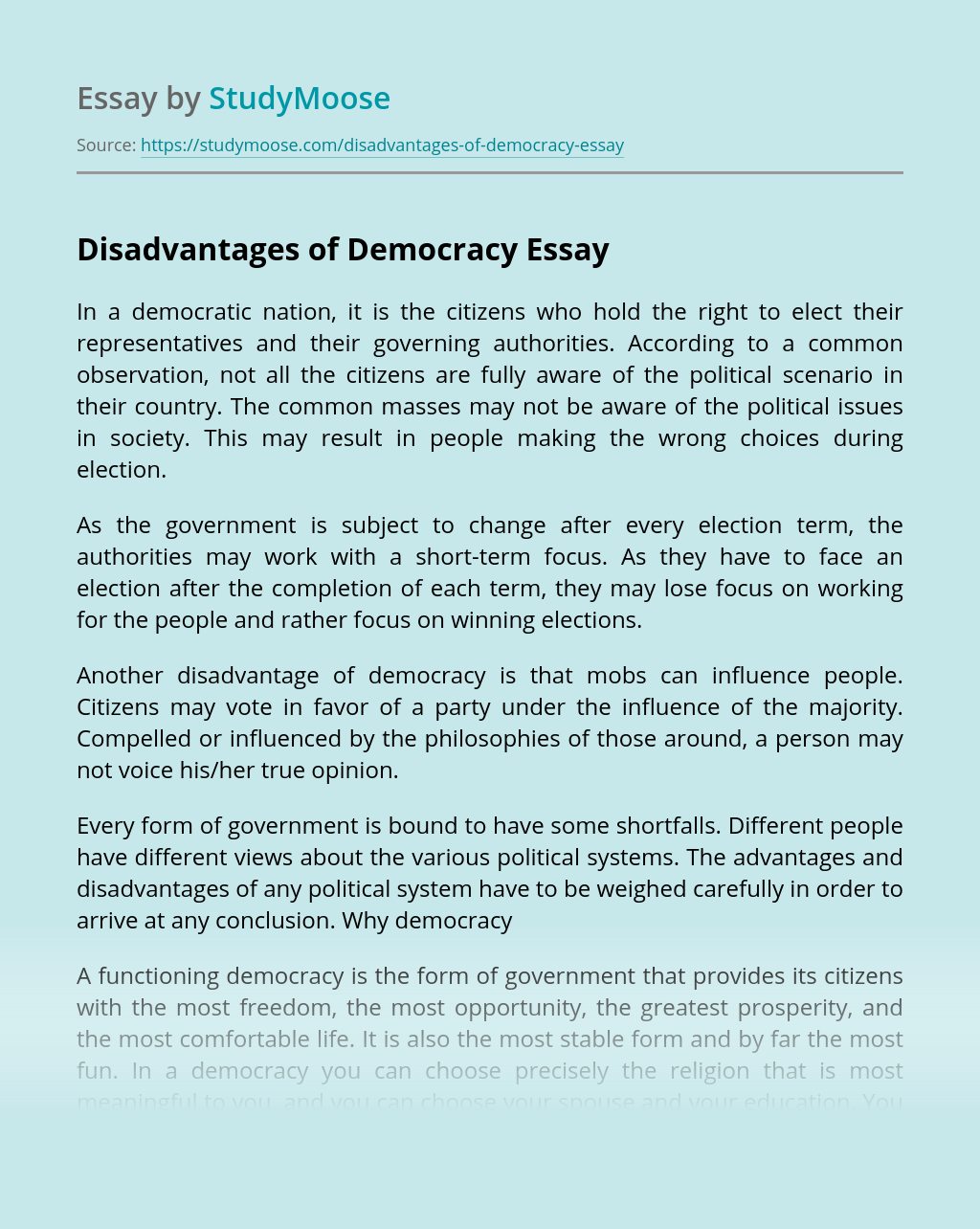 Turn in your highest-quality paper
Get a qualified writer to help you with
“ Disadvantages of Democracy ”
Get high-quality paper
Helping students since 2015
Stay Safe, Stay Original