This paper contains a series of question containing information about different social classes in different time eras. While all of the societies share some similarities, the laws that they provide are different for each class. However, there is talk about a man who lets his ego get the best of him and cost him a war. Each paragraph briefly describes each society and their depiction of rank and their laws based upon their rank, even Egyptian gods had social ranks. Therefore, this paper covers each of their laws individually to show the similarities and differences as well as answer questions given.

In Atrahasis, Anunnaki created younger gods called Igigi to do all of the work they neglected or refused to do; they were servants. For thousands of years the Igigi worked for the Anunnaki until one day, they revolted against the Anunnaki. To keep from war, the Anunnaki created humans from clay and mixed it with flesh and blood from the god Kingu to be their servants instead of the Igigi’s.

However, humans started to become a problem for the gods; they created too much noise for the gods liking. The gods tried to do everything to stop the noise, essentially they tried to kill the humans. They took away the rain for their food supplies; they released plagues to wipe them out, but nothing was working they managed to stay alive with the help of Enki.

The gods agreed on a flood that would wipe out the human race, but Enki warned one man of this plan, Atrahasis.

He tells Atrahasis to build a boat and to take two of each animal with him.Once the deed is done, the gods regret their decision and wish they never released the flood. Then they notice that one man makes it. Enki explains to the other gods ways they can help the humans from over populating and creating too much noise. In the end, the gods listen to Enki’s words and make it harder for humans to overpopulate; they make women infertile, create demons who steal their children, and create ways for women to lose their child during pregnancy.

Ramesses II’s personality is very arrogant based upon the Battle of Kadesh. His thought process was “no one could stop him.” He would lead his men for days until they set up camp. After they set up camp, they captured two Hatti soldiers and tortured them into giving them information; come to find out, the Hatti Empire sent the soldiers to give Ramesses information for an ambush. Thus, most of Ramesses’s plans had many flaws in them. In the end, no one won the war; the war was settled by a peace treaty called the Treaty of Year 21. However, Ramesses took credit for the victory of the Battle of Kadesh. Ramesses can’t take all the credit during the battle. His men fought bravely and stood by his side even when he gave questionable orders. After the war, Hatti’s lands were ruined, and they assumed the god Sutekh, or Seth, was angry with them. This god just so happens to be Ramesses “father”, so the ruler of Hatti suggested they give up all of their goods including his eldest daughter in order to make peace and restore their land. This led to the wedding of Egypt and the Hatti Empire strengthening their peace between both lands.

The Hammurabi code of law states basically states that “whatever you have done to someone, someone can do to you.” An example of this would be if someone were to cut off their neighbors foot the law would then cut off their foot injustice for the neighbor. However, this law had loopholes for the upper class; if a higher rank, nobleman, were to kill another nobleman then he would be killed as well, but if a nobleman killed a commoner he would receive a small fine instead. This law was also unequal toward women; women would receive a more serious punishment. If a woman were to cheat on her husband she would be cast into the river and killed; however, if a man were to cheat on his wife he would receive a small fine rather than killed. In the end, the Hammurabi code of law was very unequal and not very justifiable to those of low social standards.

The Assyrian law gives laws and roles for women and how they should portray themselves in public depending on their social standard because men were superior to women . Married woman and daughter heads must be covered in public. Unmarried women, prostitutes, and slaved cannot be veiled, so they’re heads must be bare; each woman would receive a different punishment for breaking this law. If a prostitute were to be veiled and a man found her, he must strip her clothing, leave her jewels, take her to the palace where she would them be whipped numerous times and have a boiling liquid poured onto her. If a slave were to be veiled then she would be taken to the palace, stripped of her clothing, and her ears cut off. The Palace Decree was very strict on their rules and they enforce them harshly. This being said, the Assyrian laws were very strict upon women and their outlook in public and breaking the laws result in serious consequences.

In conclusion, these societies hold themselves by their rank of class and masculinity and create laws based off this. Ramesses led his soldiers into battle strictly off his ego which caused them to lose the war; however, they did win an allie. To avoid massive rebellion from the Igigis, the Anunnaki created humans to become their slaves; however realized that they were too noisy and caused too many problems when they tried to eliminate them they felt guilty and just created ways to make population difficulty rather than killing all of them. After reviewing and learning about these questions, it can be determined that all of their laws were strict and unequal toward lower rank individuals and women. 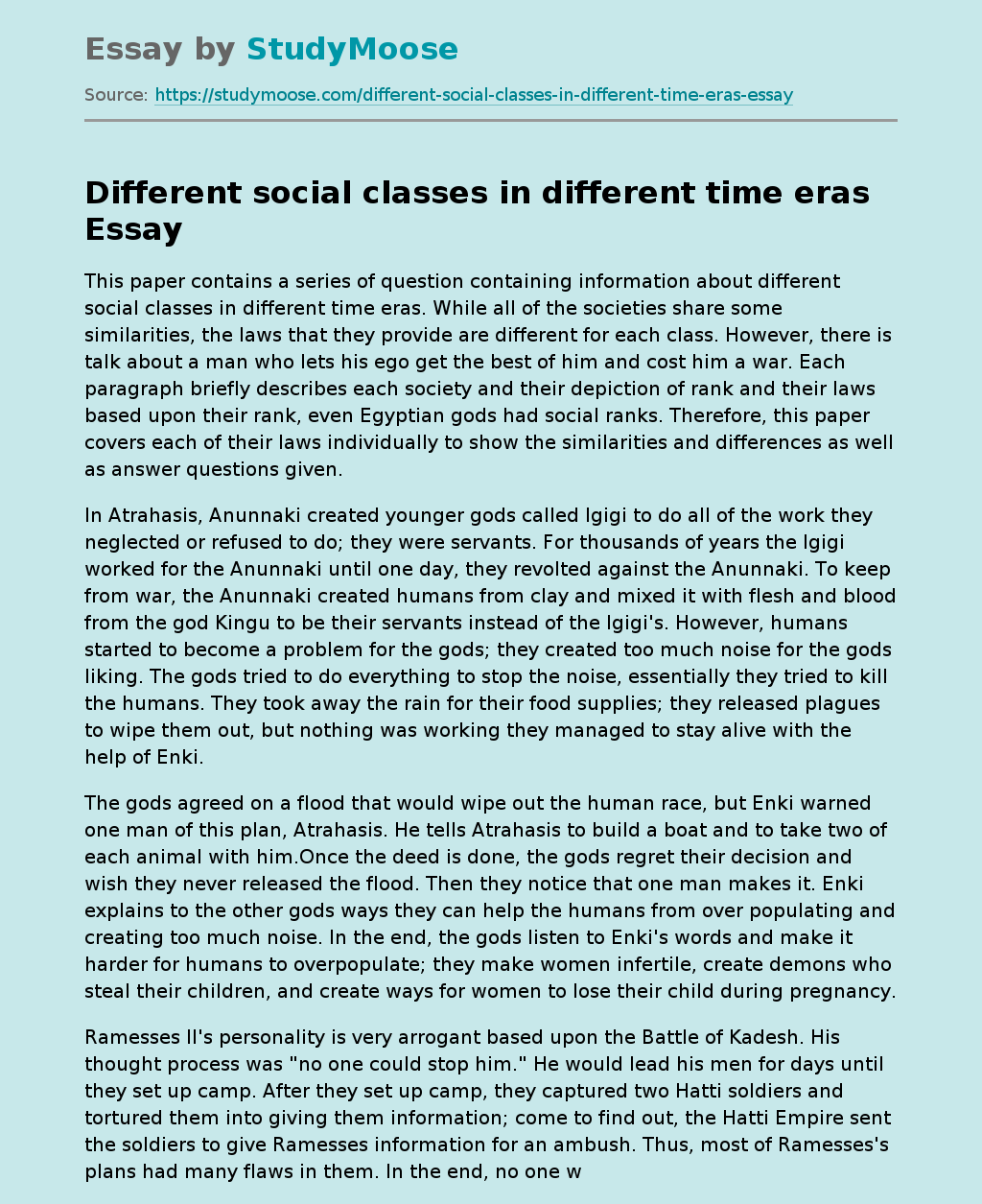