In the essay “Class in America: Myths and Realities” the author G.Mantsios advances a few hypothesis about the differentiation of contemporary society in the U.S. First author is showing that however, people rarely or never talk about the existence of social classes in the U.S. such classes not only exists but there is a huge abyss between them. Second part of the essays is demonstration that people who are born in the families already well doing have the better start, education, aspirations and opportunities then the people whose parents are poor.

Don't use plagiarized sources. Get your custom essay on
“ “Class in America: Myths and Realities” Gregory Mantsios ”
Get custom paper
NEW! smart matching with writer

In his opinion, the belonging to the low class does not give the chance to succeed and this is even more difficult for the minorities. The third part is the summary of the earlier analysis. On the base of the statistical data author introduces his opinion that poor and minorities are oppressed by capitalism, which author calls to be “a system that is based on private rather then public ownership and control of commercial enterprises, and on the class division between those who own and control and those whom do not.

Under the capitalism, these enterprises are governed by the need to produce a profit for the owners, rather than to fulfill collective needs. “

After reading the first two parts of Mantosis’ essay, I responded with the agreement.

Even without statistical data, I would believe the author that social classes not only exists but also that moving socially upward is not an easy matter and for sure, one of determining success’ factors is the place of the birth.

That seems natural that parents help their children in the way they could so if the parents have means so their children will have better start than others will. However, I agree with that of his opinion I am going to argue with the opinion that blames the capitalism for being to oppressive to the lower classes.

First of all in my opinion it could not be better system that capitalism although it can have sometimes its own dark sides it can be successfully regulated by governments. Therefore not system is to be blamed only our politicians, senators and ministers whose responsibility is to direct this system to work properly for the good of all citizens. The U.S is probably the only one country from these well-developed where the capitalism is the least restricted. Although the other well-developed countries, have less economical potential they do not fail to provide what is the base for a good society – the health system for all citizens and high level of education for all children, while the American system fails in it. In other countries as Germany, Switzerland etc. all employers

are required to pay for the heath insurance while in America the lowest classes desperately look for that protection and therefore they agree to work for the minimal wages only to have the health insurance coverage. Another failure is the education system, it seems to me almost unbelievable that in the richest country on the earth is the lower level of the education and some children can finish school and still have problems with reading and writing. These are only a few examples of the American government failures but there are still many more. The distribution of the governments spending can shift the money from the one class to another as well as the tax regulation can be tools to change the desperate situation of the lowest classes.

The good investment support, as well as good banks regulation in the loans ‘domain could give the opportunity for middle class to develop, and help these people who have an initiative and talents but do not have money to fulfill the dreams. 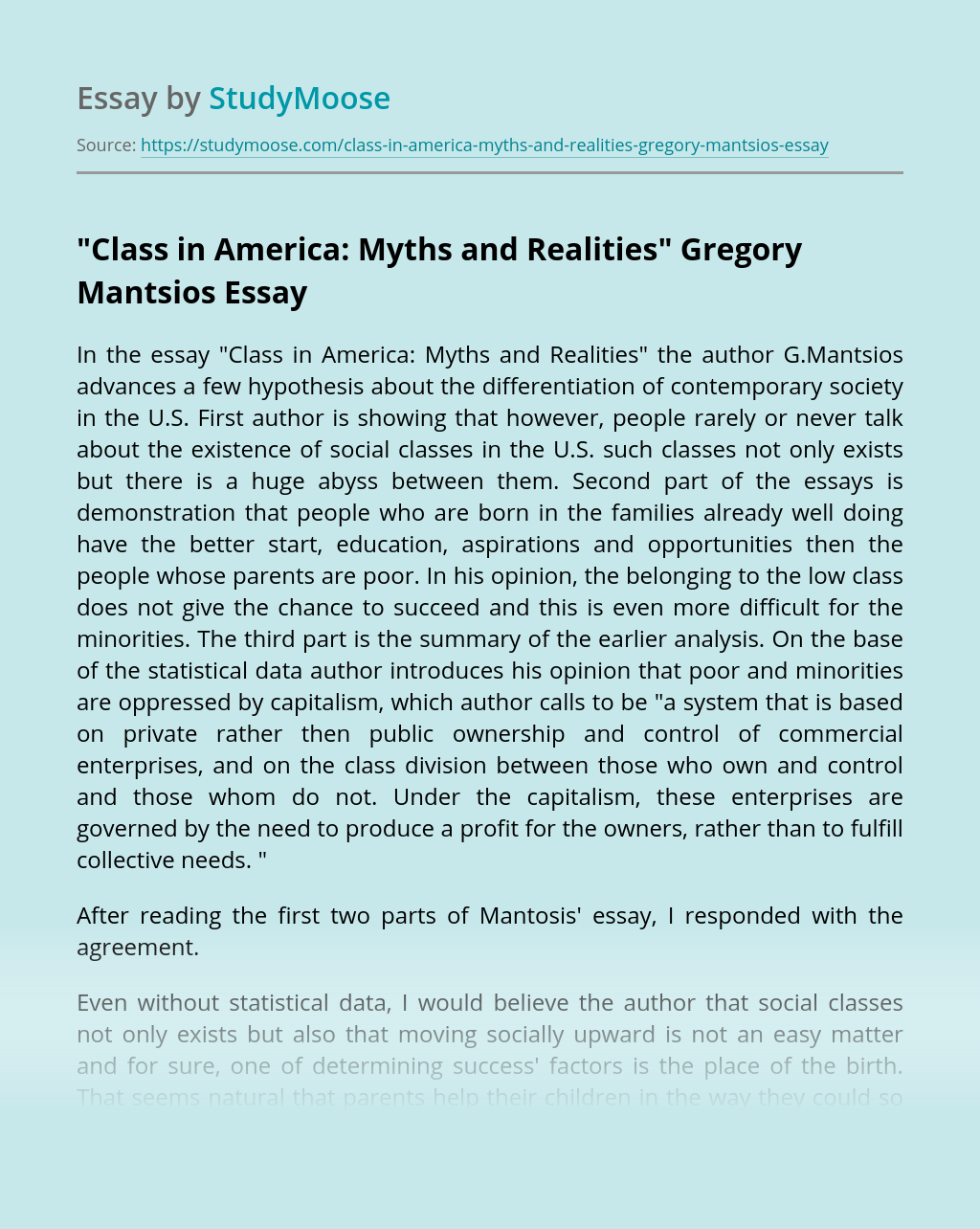