Specific purpose: To persuade my audience that IQ testing is not a valid measure to be used on modern populations.

Don't use plagiarized sources. Get your custom essay on
“ IQ Testing is Not a Valid Measure to be Used on Modern Populations ”
Get custom paper
NEW! smart matching with writer

Central Idea: At the end of my speech the audience will know all about the disadvantages of IQ testing in addition to the bad impact it has on today’s society.

At the end of the speech you’ll know all about the disadvantages of IQ testing and why it is not a fit measure to be used on modern populations. I’m going to first tell you about the consequences that a low IQ test result can have on a person’s life, then I’m going to tell you about how the IQ test is in fact not as reliable as anyone would think and finally even though it might not be 100% reliable it is still the best existing way of measuring logic.

A low IQ test score can result in having a psychological as well as a social impact on the test taker. A. Social impact:
The most dangerous assumption on IQ testing is that it measures someone’s biological or inborn intelligence that is set in stone and therefore can never change. The family and the teachers of someone with a low IQ will expect much less of that person which will then fail because of the lack of encouragements he is receiving.

Moreover, according to Bruce Uditsky in his article:” One of the original purposes of IQ tests was to determine or predict which students would require additional help to be successful in school. It then is an interesting question as to how these IQ scores evolved into stigmatizing, categorizing, racially prejudiced and negatively life-defining outcomes for students with developmental disabilities and others”. B. A child with a low IQ score will start feeling inferior to his friends specially that at a young age competition between friends is at its peek. The negative labels applied as a consequence of an IQ test are lifelong and in the current context of our society limiting and hurtful.

Transition: Therefore it is important to ask ourselves if this test that can determine if someone is mentally less capable than someone else is in fact reliable enough. II- The reasons why intelligence quotient tests are not reliable enough: A. A score can differ significantly from one IQ test to another taken by the same person, in the same conditions: “During 2002–2003, as part of validation for their new IQ test, the KABC-II, Alan and Nadeen Kaufman looked at IQ test scores from a dozen children aged 12-13 who were tested on three different contemporary IQ tests. The first thing to note is that those exposed to greater opportunities for learning tended to score higher on IQ tests than those from lower-SES backgrounds. But even collapsing across SES, every single preadolescent had a different IQ score based on which test they took. The differences for the dozen children ranged from 1 to 22 points, with an average difference of 12 points”. Therefore if a child scored 75 on a test he would be labeled as “slow learner”, but it is very possible that the same child could have scored 95 on another approved IQ test, and a score of 95 is an average score. B. Moreover, IQ tests are culturally unfair, most of the approved ones are designed for use among white middle class children. And as we can see in this slide, an average Ethiopian person would be considered retarded in Hong Kong. Transition: On the other hand IQ tests are still the best way to measure logical thinking and can benefit children who get a good score on it.

If a student who has a high score is having difficulties learning, directly an assumption is made that his learning processes needs to be understood and educational strategies need to be applied in order to help the student become successful. B. In addition, if we don’t generalize it to be a test that measures intelligence IQ testing is the best way to measure logical abilities, which is the closest thing to intelligence.

In conclusion, because IQ tests are administered by human beings on human beings, they are not 100% reliable and the same person can get very different results on two different tests and because they are culturally unfair; IQ tests shouldn’t be considered as a valid measure of human intelligence and therefore a person with a low score should not be categorized and stigmatized for life.

IQ Testing is Not a Valid Measure to be Used on Modern Populations. (2016, Feb 28). Retrieved from http://studymoose.com/outline-of-persuasive-speech-essay 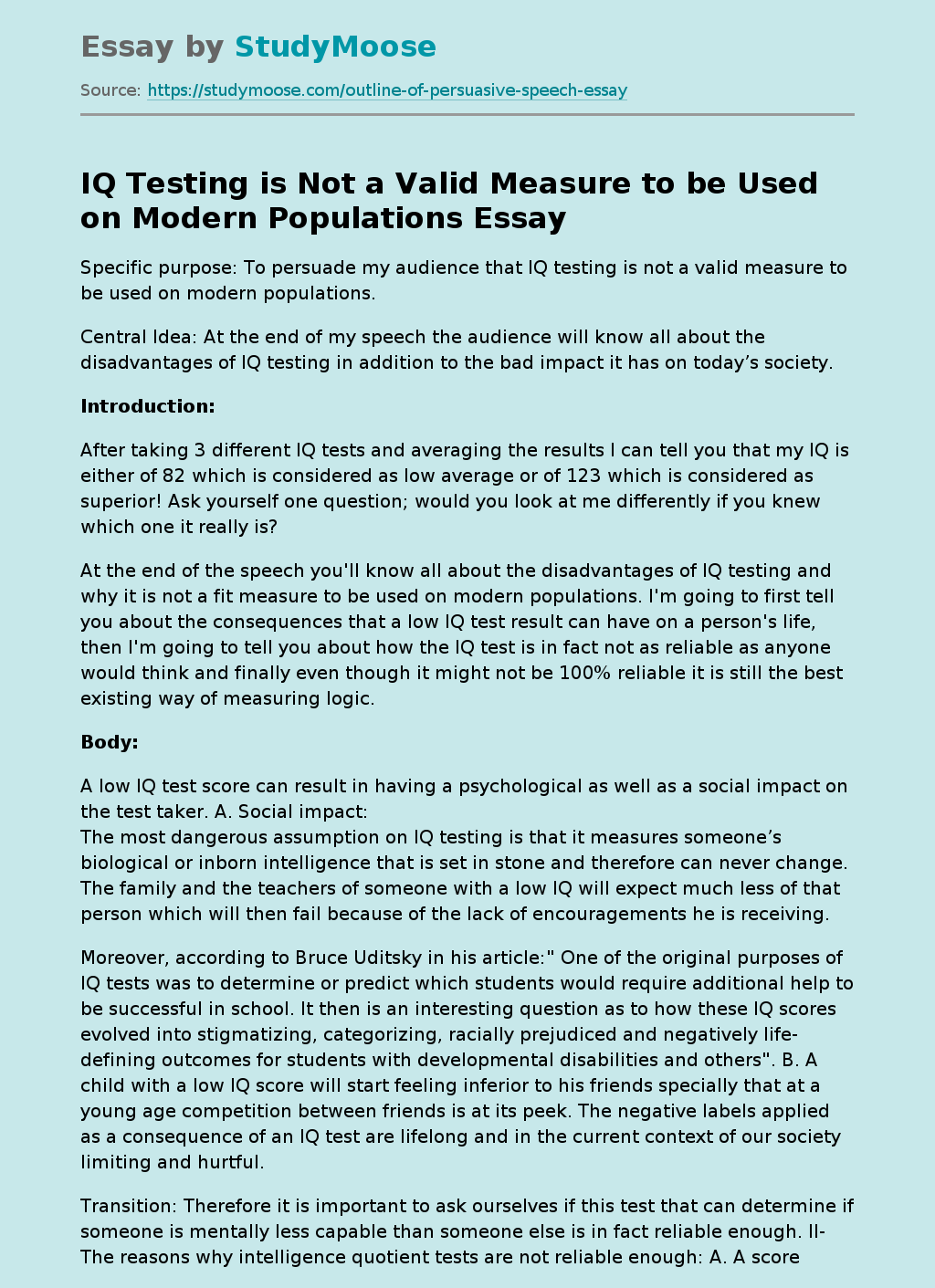