The movie is a potent social document of poverty, ignorance, and brutality of man by Victor Hugo. Les Miserables is also a rousing adventure of the hapless victim of French society – Jean Valjean, and his valiant struggle to redeem his past. The movie had been so well done. The actors and actresses had played their part and portrayed the characters in a way that the audience could really relate to. It was shorter than the adaptation of 2012 Les Miserables but the characters gave justice to their role.

Turn in your highest-quality paper
Get a qualified writer to help you with
“ Reaction Paper of the movie Les Miserables (1998) ”
Get high-quality paper
NEW! AI matching with writer

In addition, I prefer the 1998 adaptation than of the latest.

Les Miserables is a story that portrays of the heroic life of a simple and good man in the person of Jean Valjean. He is a very memorable character who is morally upright but guilty of certain thefts for which he feels remorse. To avoid capture and life sentence, he assumes the identity of Monsieur Madeliene, soon becoming the mayor of the small town he has adopted.

It is a very beautiful story packed with excitement. You will always try to think what would happen to the characters as they ventured into new frontiers. It talks about man’s struggle to escape the past and reaffirm his humanity in a society where in poverty and ignorance prevails. Aside from being a superb adventure, it can also be considered as a powerful social document. It shows the inhumane treatment of the convicts and ex-convicts.

It also shows how a man can be redeemed by accepting suffering, and by following the dictates of his conscience even if it entails suffering and ostracism from many people.

It also talks about the man’s struggle for existence in the case of the principal character, Jean Valjean as he tried to forget the past and go on with his life. He is such a remarkable character distinct to other people we met in our daily undertakings. He’s exceptional and one of a kind. It dwells with the supernatural power of love, the love to give up one’s freedom for the sake of justice. It is also quite romantic especially on the part of the love affair of Marius and Cosette that tickles your bones. However, it is more on being a melodrama that let your heart cry out especially on the ending part when Jean was willing to sacrifice his freedom for the happiness and peace of mind of his adopted daughter Cosette.

On the other hand, I don’t like the part where Cosette fell in love to Marius on a short span of time. Marius was the big disappointment. He came across as a wimp. It had to be Cosette’s lack of knowledge that attracted her to him. She could have done so much better. I don’t feel that anyone, with the exception of Fantine, was portrayed as well as possible. There were times that I should have been brought to tears, and I wasn’t. Another memorable character is Javert, the inspector who always followed Jean in the hope of capturing him. He is very much obsessed about it that leads to his death in his own hands. He can’t accept that he who is trying to inflict harm to a person was saved by the same person. I admire his courage to admit that his father was a thief and his mother was a prostitute helps me understand more fully his reactions to Valjean, Fantine, and Cosette.

Valjean’s last moment with Marius and Cosette – who among us have not lost a loved one, ever? I’m sure everyone can relate. I also like the part when Valjean was willing to do everything just to protect Cosette. It stirred me deep inside because knowing that he’s not her biological father and yet he’s willing to risk everything for the happiness of his adopted daughter. It reminds me of my father on the other way ‘round.

Gavroche’s parts – the kid was awesome too. He deserves to have another movie! This film teaches us many things. Such as we can’t escape our conscience. Even if we have successfully hidden our secrets in the form of misdeeds in the past, it will continue to haunt us until we face it and divulge it in public. Such was the case of Jean. It opens our eyes about the reality in our society we belong where there are lots of injustices, discriminations and the like. It also tells us not to judge the book by its cover in the case of Marius. We should not let pass any judgment over anybody because that person might have a golden heart hidden within him. We should also put in mind that if there is life, there is hope.

No matter how messy our past had come, we could still make amends to it and make our lives better. Jean is a great example of such thing; he succeeded to become a mayor in a town despite his dark past. Life is difficult but it is in difficulty that we can appreciate its meaning. The miserable character of Jean in the movie teaches us the reality in life. Nevertheless, the bottom line is “It does not matter how many heartaches, sufferings and pains we encountered in life as long as we have loved and we have been loved. 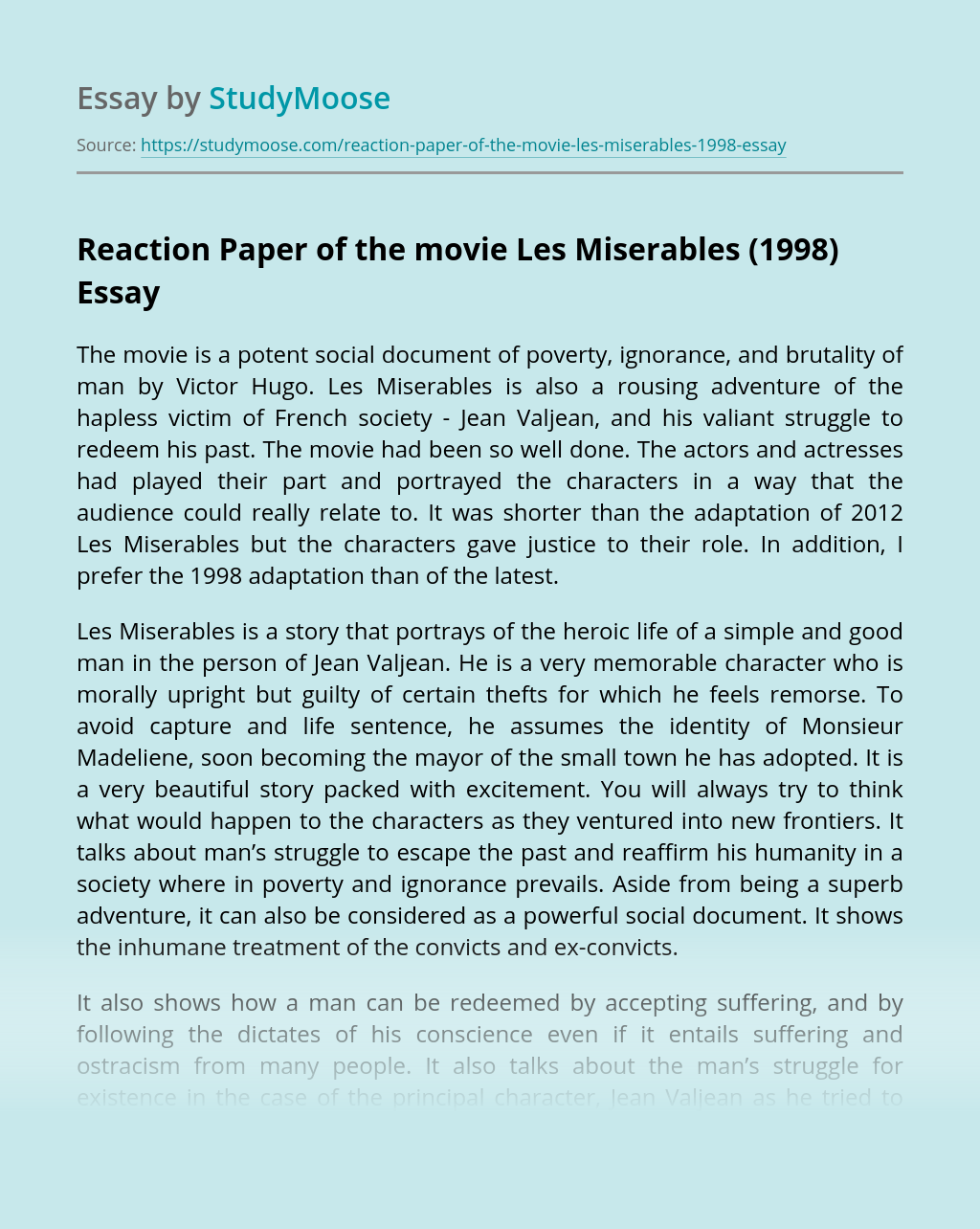 Turn in your highest-quality paper
Get a qualified writer to help you with
“ Reaction Paper of the movie Les Miserables (1998) ”
Get high-quality paper
Helping students since 2015
Stay Safe, Stay Original