An Analysis of Les Miserables' Bring Him Home

One of the most popular songs in Les Miserables is the song entitled Bring Him Home. It is sung by Jean Valjean in Act II of Les Miserables as a form of prayer to God in order for a young man named Marius to be able to return home to the woman he loves, Cosette (Guy & Llewelyn-Jones, ). The story behind the song is that Cosette was an orphan whom Jean Valjean had cared for who fell in love with the young man named Marius.

Don't use plagiarized sources. Get your custom essay on
“ An Analysis of Les Miserables’ Bring Him Home ”
Get custom paper
NEW! smart matching with writer

However, Marius had become involved in a series of anti-government riots, which puts her relationship with Cosette in a very awkward position.

Jean Valjean decides to help Marius get back to Cosette, and this song was his prayer (Guy and Llewelyn-Jones, ). The prominent theme in the song is the longing for the safety of another individual. It was, in a sense, finding happiness in the happiness of another, and the singer, Valjean, indicated that he wanted the young boy named Maruis to be able to be brought home safely, back to the arms of Cosette.

Valjean sings to the Lord, appealing to Him, and trying to reason to Him, that Marius deserved to be able to go home.

In fact, Valjean even sings that: “You can take, you can give, let him be let him live. If I die, let me die.

Let him leave, bring him home” (NIEHS, n. d. ). If one is to read this carefully, it would mean that Valjean’s song is saying that, it does not matter if he dies, as long as God spares this young man who is in love with Cosette and brings him home. References NIEHS. (n. d. ). Bring Him Home. Retrieved from http://kids. niehs. nih. gov/lyrics/bringhom. htm. Guy, A. & Llewelyn-Jones, I. (2004). A student’s guide to GCSE music: For the WJEC specification. London: Rhinegold Publishing Ltd.

An Analysis of Les Miserables' Bring Him Home. (2016, Sep 21). Retrieved from https://studymoose.com/an-analysis-of-les-miserables-bring-him-home-essay 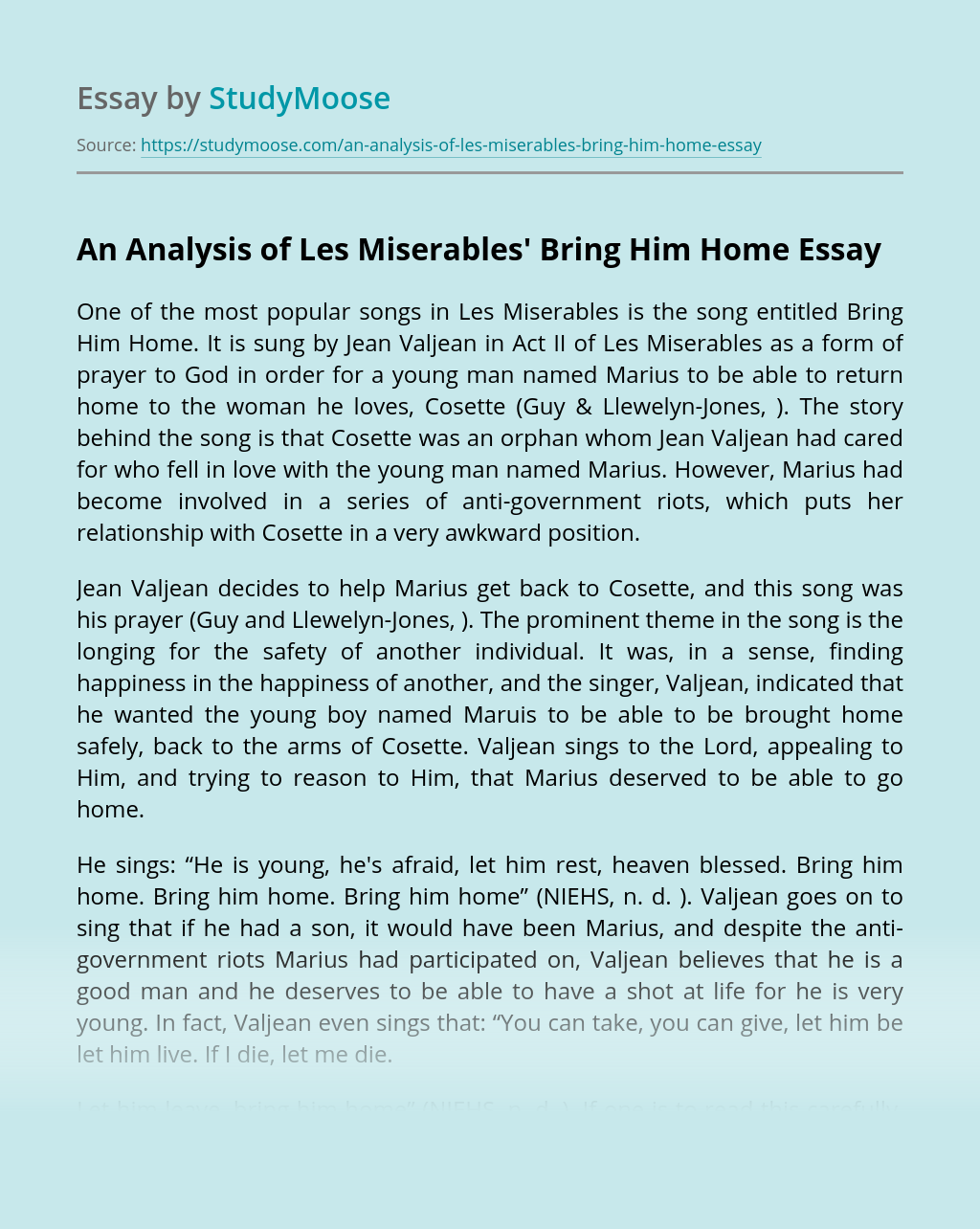