Role of Social Classes in "The Great Gatsby"

“Whenever you feel like criticizing anyone,” he told me, “just remember that all the people in this world haven’t had the advantages you’ve had.” These “advantages” create boundaries among characters that divide them into different social classes. These social classes play a large role in the way F. Scott Fitzgerald’s characters act and react to events that occur in his novel, The Great Gatsby. This paradigm of social classes builds boundaries among the mediocre, the self-governed, and the leisure classes, and guides Wilson’s, Gatsby’s, and Tom’s fates.

Don't use plagiarized sources. Get your custom essay on
“ Role of Social Classes in “The Great Gatsby” ”
Get custom paper
NEW! smart matching with writer

Throughout the novel, George Wilson, while being the most moralistic character in the novel, is a near perfect example of the mediocre man. Almost everytime Wilson is discussed in the novel, he is in his shop located in the “Valley of Ashes.” Michaelis describes Wilson as a hollow-eyed man who never truly does anything but work (Fitzgerald 136).

Wilson’s ordinary job, while it may be honest, does not provide a path for him to gain any advantage that will put him ahead in life.

Which in the end, leaves Wilson with an infinitesimal chance to escape the “Valley of Ashes.”This relates to Thorstein Veblen’s book, The Theory of the Leisure Class: in which Veblen describes a lower class who have no other choice but to work. The lower classes necessity to work creates a circular struggle of working to get ahead. Because, working takes up their time, the time they lose causes them to lose those close to them, and to try and gain back those they’ve lost makes them work to try and get ahead.

The lower classes have no choice other than to work, which is their sole source of emulation (Veblen 23).

With no choice other than to work, their labor is therefore not demeaning unto this lower class.Returning to the point of the circular struggle, which causes the lower class to lose that which they hold important. Wilson always working is a catalyst that leads him to lose everything that he holds dear. All throughout the novel, Wilson works because he has nothing else that makes him special; something that could give him an advantage to achieve the near universal goal of becoming a part of the conceptual leisure class. Tom Buchanan illustrates Wilson’s lack of talent during Tom’s affair with Myrtle Wilson when he states, “Wilson? He thinks she goes to see her sister in New York. He’s so dumb he doesn’t know he’s alive” (Fitzgerald 26).

The biggest proven difference between the leisure class and the mediocre is their origin. No matter what is done by a mediocre character throughout their lives, they will never be able to become a part of the leisure class if they were not born into it. Conversely, Tom Buchanan almost perfectly represents the concept of the leisure class: those who gain their wealth through inheritance. Among Thorstein Veblen’s description of the leisure class is the fact that industrial labor is demeaning to those of wealth. Making one of the few lines of work open to this class is being an athlete. Tom was one of the greatest “ends” to play football at New Haven, he even brought his string of polo ponies down from Lake Forest when he moved to the East Egg (Fitzgerald 6).

Showing that while Tom is not a manual laborer, but rather a person who uses his wealth and athleticism to try to prove his superiority over his peers. Building upon the concept of the leisure class, Tom who has not worked a day in his life to gain his wealth: he just gained an inheritance from his parents. Having all this money without knowing of the struggles that are bestowed upon those raised in lower castes forms, Tom is shown to be very cruel and physically aggressive in nature. This warrior like mentality that Veblen says is reserved solely for the members of the highest social statuses is apparent whenever Tom runs into any sort of conflict. Tom always wants to show that he’s is superior to all those around him physically, but his ways of asserting his dominance are shown to be inanely questionable (Lena 3).

This violent nature illustrated many times throughout Fitzgerald’s novel such as Tom smashing Myrtle’s nose, Tom threatening Wilson when he thinks that it was Tom’s car that killed Myrtle, and Tom using every dark detail he could find from Gatsby’s past to keep Daisy from loving Gatsby. Another way in which Tom conceptualizes the leisure class, is the flaunting of his wealth. Veblen describes a duty of the members of the leisure class, to display their wealth as a gesture of how honourable and high class they are (Veblen 31). “His Family were enormously wealthy–even in college his freedom with money was a matter for reproach” (Fitzgerald 6). This extravagant use of wealth is exasperating to many as it shows that no matter how much they work, they will never be able to accumulate the wealth to be so blasé about being such a spendthrift.In the article, “American dream in The Great Gatsby” by Carla L. Verderame, it is discussed how the ideal of the American Dream is so prominent in many aspects of The Great Gatsby.

Yet the boundaries of social and class hierarchies are unbreakable. No matter how much wealth the character has attained, in the end it all goes back to the character’s origins. “Those with ‘old money,’ such as the Buchanans, live in East Egg. This not-so-subtle reminder of class distinction underscores Gatsby’s humble background and suggest’s the challenges of moving beyond all origins. Regardless of Gatsby’s financial success, he is still considered “new money” and, therefore, not quite up-to-par by the established families in the area” (par. 3). So, while Gatsby may have been able to follow the American Dream using some of his more questionable business practices; in the end, it is only those born with money, “old money,” who will be able to escape tragedies (Verderame).

Role of Social Classes in "The Great Gatsby". (2021, Sep 22). Retrieved from https://studymoose.com/role-of-social-classes-in-the-great-gatsby-essay 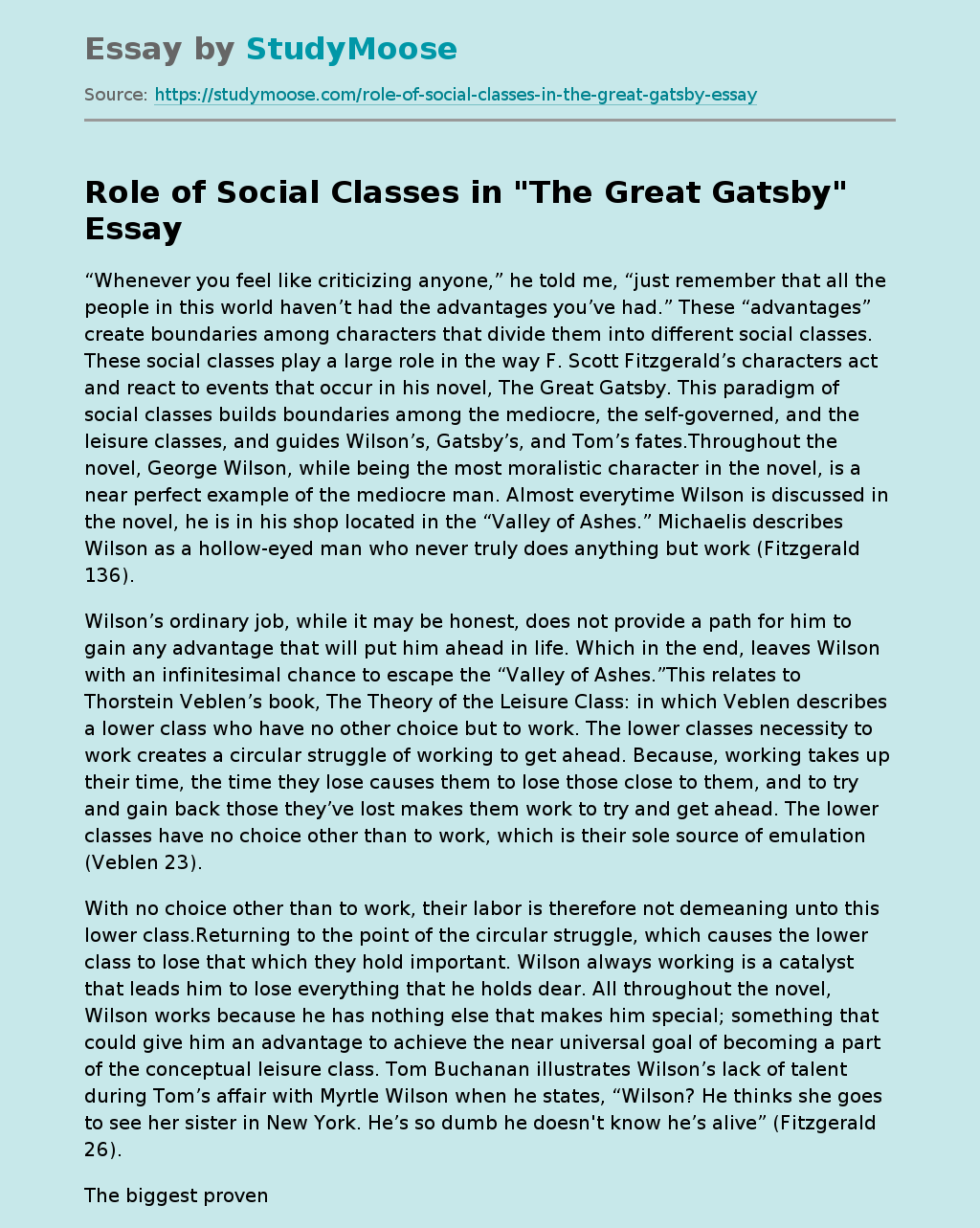