Birling is shown as arrogant and ignorant, but Priestly also reflects some fear that Birling might lose his wealth in case of war and therefore it denies war very strongly. Should a war start many of Birlings labour force will go and fight and England can suffer great economical damage. Birling is afraid to admit that, this could happen and therefore denies any chance of war with such confidence. Birling also uses proleptic irony throughout act one. Proleptic irony is the use of a phrase which is seemingly innocent but gains significance later.

Examples of this in act one is first, when Birling says to Eric ‘and one day, I hope, when you have a daughter of your own, you’ll understand why’. Later in the play we find out that Eric got Eva Smith pregnant and therefore could have had a daughter. Another example is where Birling talks to Gerald about Eric, ‘you don’t know what some of these boys get up to nowadays’.

Later on the audience finds out that both Eric and Gerald have been with Eva Smith. In terms of genre the play could be described in a few ways.

Initially it has a structure of a detective thriller as the inspector comes to investigate a death of a young woman, of which neither the audience nor the characters know anything about. “I’d like some information, if you don’t mind, Mr Birling. Two hours ago a young woman died in the infirmary. She’d been taken there this afternoon because she’d swallowed a lot of strong disinfectant.

Burnt her inside out, of course. ” At this point Priestly has built some tension as the audience tries to think how the character might be connected with the death of this girl.

As the play progresses it becomes whodunit, as the inspector slowly reveals what each characters connection with that girl is, it becomes a mystery. Whenever the inspector shows the picture of Eva Smith he shows it only to one character privately, so that the audience doesn’t know if it is the same girl in each picture, or if each picture is of a different person. The play then becomes focused on morality, as even though the play ends in a cliff hanger with no one knowing who the inspector really is, each character gains some principles and morals to what they have done wrong.

When the play starts the lighting that is used is pink; as it says at the beginning of the play: “The lighting should be pink and intimate until the inspector arrives, and then it should be brighter and harder. ” The bright pink lighting at the start of the play reflects on how the Birlings see themselves at the beginning, people who have done nothing wrong. The pink lighting can also represent a romantic and that nothing terrible can happen to the Birlings.

Mr Birling responds by being very suspicious, “(after a pause, with a touch of impatience) Well, what is it then? ” Mr Birling likes to be in control of everything and wants to know everything that is going on. The inspector takes his time and doesn’t immediately reveal why he’s there, what happened and who of the Birling family he’s come to ask questions, this makes Mr Birling very impatient. Although Birling is impatient, he doesn’t fail to show confidence and superiority to the inspector, “I was an alderman for years – and Lord Mayor two years ago – and I’m still on the Bench – so I know the Brumley police officers pretty well.

” Birling tries to tell the inspector here that although the inspector has come to investigate him, Mr Birling is still superior to him, and therefore tries to tell the inspector that if he doesn’t act right, Mr Birling will make sure that he suffers the consequences. Eric’s response is much different then Mr Birlings, Eric is seen as shocked and upset, “(who is uneasy, sharply) Here, what do you mean? ” Priestly shows Eric’s immaturity here, as he acts like a child once he hears that an inspector has come, he speaks nervously, almost assuring everyone that he has done something wrong.

Mr Birling had to tell Eric off in order to come him down, “(sharply, staring at him) What’s the matter with you? ” Eric replies, “(defiantly) Nothing. ” This again shows Eric’s immaturity, as his father has to come him down. Gerald Croft doesn’t seem to care much about the young girl, but more about his special evening spoiled. Gerald tries to avoid confrontation with the inspector and just wants to leave; an example of this is when Gerald says to the inspector; “Look here, sir. Wouldn’t you rather I was out of this?

At first she is curious to know why the inspector is there, “(coming further in) What business? What’s happening? ” After being told to go back to the drawing room Sheila is still curious to know what is going on. Sheila at first wants to know why the inspector is there but then when she is told, she starts feeling sorry for Eva Smith, “oh – how horrible! Was it an accident? ” The inspector brings out a different side of Sheila, one which wasn’t seen before; she is seen as a vulnerable girl, who is sympathetic to everyone.

Before the inspector arrives she is seen as a rich snob, who thinks that she is superior to lower class people. Throughout Act One Priestley manipulates the audience; he does this in different methods. The inspector announces that a young girl had just died, “Two hours ago a young woman died in the Infirmary. She’d been taken there this afternoon because she’d swallowed a lot of strong disinfectant. Burnt her inside out, of course. ” Priestly uses this method to get the audience to commiserate with the death of that young woman.

Another method that Priestly uses to get the audience involved is with dramatic irony. When the Birling family is first introduced they are seen as a happy, respectable, wealthy family. However, this all changes when the inspector enters, the image of a respectable family that the Birlings were seen to be begin to fade away. Priestly also uses progressive revelations and climax to interest the audience and make them wonder what connection did each character have with Eva Smith. The overall message of ‘An Inspector Calls’ is social responsibility.

The play teaches us that no matter how important and respectable a people see themselves as, they are still responsible for and face the consequences of their own actions. This is still relevant nowadays as people still act this way, and do not take responsibility for their own actions. 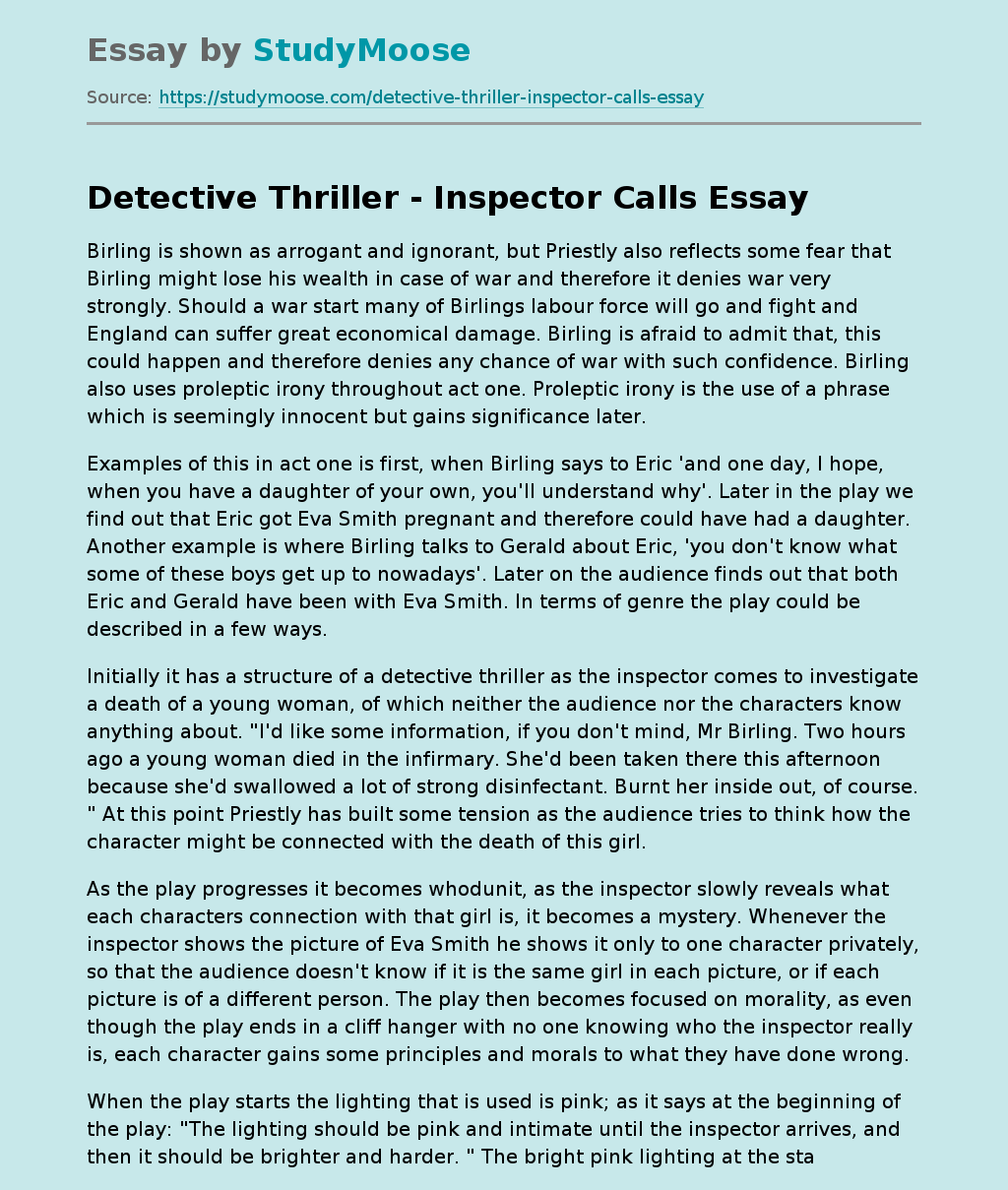