Definition of the Concept Within The Two Perspectives

The definition of development from the logical positivism perspective is the measurable, observable evidence of progress. Developmental changes, such as the development of academic skills, can be measured by standardized testing. The definition of development from the process organism perspective is the sum of interactions between entities, both observed and intangible. Process organism stresses the communication of forces as a basis for development, not solely by measurable milestones (Godfrey-Smith, 2003).

The better definition of development, between the two perspectives, favors process organism.

Don't use plagiarized sources. Get your custom essay on
“ Definition of the Concept Within The Two Perspectives ”
Get custom paper
NEW! smart matching with writer

Process organism lends itself to both the immediate and the temporal. Whitehead emphasized the interactions between science, ethics, and religion to form a complete picture of our surrounding world (Whitehead, 1925). How one grows to understand their surroundings begins in the womb. Sensorimotor inputs, such as proprioception and temperature, begin to develop well before a baby understands of how to measure them. If a child were predisposed to a hardline logistical positivist stance on experiencing reality, the child would likely grow up with no sense of wander or creativity.

Creativity was a central component of Whitehead’s approach to reality (Whitehead, 1925). Today’s public education system stresses the importance of early mathematics and grammar, but it also seeks to foster creativity and to develop soft skills. If education were modeled strictly after a logical positivist curriculum, there would be many highly-educated, yet socially-inert, young students.

Process organism derives its meaning from interaction, which includes the internal environment of the mind. The joy of a healthy newborn child, as many parents would argue, is quite immeasurable.

The sadness of a loss of a loved one could likewise be incalculable. The notion that philosophy excludes feeling, despite how these powerful emotions drive our communal worldview, is immature. The principle of verifiability, while highly valid for scientific experimentation, is not all-encompassing (Godfrey-Smith, 2003). Process organism explains development as a process outside the bounds of time, one that is both reflective and inclusive. As Whitehead points out, the scent of a rose is not solely intrinsic to the rose, but rather the individual’s perception of it and its interrelating forces (Whitehead, 1925). The sense of smell may be measurable and observable in genetics, but the experience of such an event–a profound experience that can hardly be quantified–is the sum of many interactions. Whitehead was not wrong to associate the interaction of color, music, and emotion with development.

In conclusion, development cannot be fully measured as a whole. There are simply too many aspects that cannot fit into an experiment. Although the tangible view of development from logical positivism is valid in its own right, it is simply not adequate. The process organist acknowledges the interaction of the individual with his or her surrounding universe to give a unified, continuous view of development.

Definition of the Concept Within The Two Perspectives. (2019, Dec 09). Retrieved from http://studymoose.com/definition-of-the-concept-within-the-two-perspectives-essay 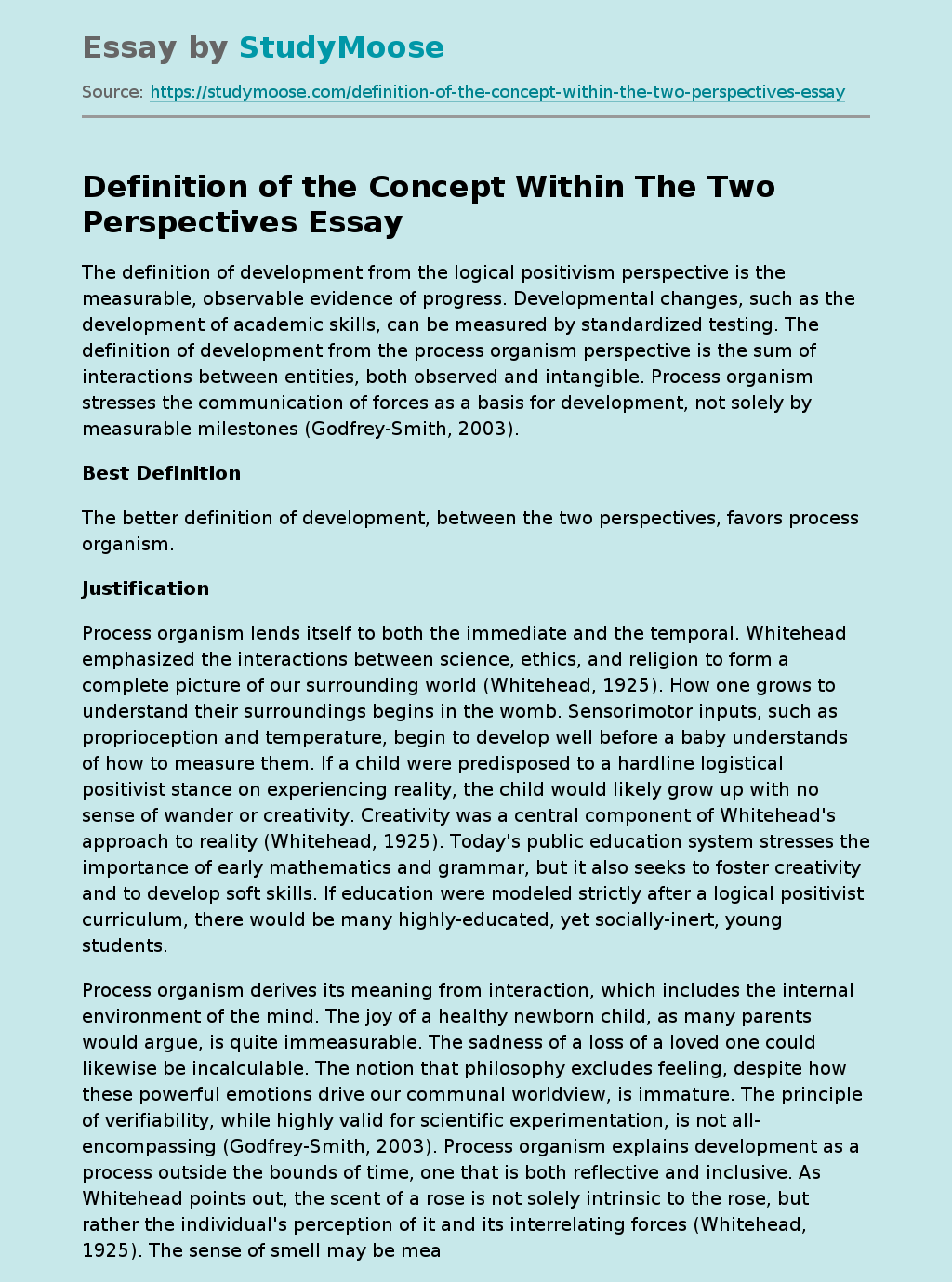