Love has a different meaning for many. For some, it may be an act of loyalty, and for others, it could be a comforting relationship. It is also an act in which everyone is happy. However, few differentiate love from lust like the character of Tomas from the book “The Unbearable Lightness of Being” by Milan Kundera does. In fact, the function of the fifth part is to prove that even though Tomas has sexual relationships with other women, he still loves Tereza.

Don't use plagiarized sources. Get your custom essay on
“ Love and Lust: Two Different Concept ”
Get custom paper
NEW! smart matching with writer

Sex and love are two distinct concepts for Tomas who loves Tereza but then sleeps with other women. He justifies this distinction by referring to his colleague’s research that “claimed that during any kind of dream men have erections, which means that the link between erections and naked women is only one of thousands way the Creator set the clockwork moving in a man’s head.” (236). Indeed, it is with the imagery of a mechanism that allows the function of a device that permits the imagination to link the distinction of love and lust to something quite technical.

Therefore, man can be sexually excited by anything symbolizing that Tomas has no real control over the attraction he feels towards other naked women. However, Tomas can choose the one he loves and he chose Tereza. Moreover, he also believes that “Attaching love to sex is one of the most bizarre ideas the Creator ever had” (237) meaning that love and lust are truly two different concepts for Tomas who would rather not be disturbed “by the aggressive stupidity of sex” (237) while loving Tereza.

In other words, Tomas does not believe that lust should be a medium that will allow him to prove his love for Tereza. Tomas is characterized as always wanting to fight for the greater good but for Tereza, he stopped, proving that he loves her. Indeed, Tomas linked the tale of Oedipus with the situation in which the world was currently in because of Communists. He then developed an “analogy [that] so pleased him that he often used it in conversations with friends, and his formulation grew increasingly precise and elegant” (177) and from there, wrote an article about it. When the article was printed, his job as a surgeon was at stake because the authorities were not happy with his perspective on events. Therefore, Tomas only had two options: whether to retract his article and keep his profession or to not retract his article and keep his honor.

It became apparent that when “the thing that struck [Tomas the most]: although he had never given people cause to doubt his integrity, [was that] they were ready to bet on his dishonesty rather than on his virtue” (181). Tomas’ decision was being foreshadowed meaning that his honor was more important than his “meaning of life” (179). However, Tomas did refuse to sign a petition that would liberate political prisoners because by signing it “he could be fairly certain that [Tereza] would have more frequent visits from undercover agents, and that her hands would tremble more and more.” (219) and he did not want to hurt his wife anymore. In other words, he wanted her to be happy because he loved her.

Tomas will, in the end, always choose Tereza over any other woman, which demonstrates his love for her. He realizes in the fifth part of the book that he will choose Tereza over the women of his life. The realization that Tomas had in which “he will abandon the house of his happiness, time and again abandon his paradise and the woman from his dream and betray “Es muss sein!” of his love to go off with Tereza, the woman born of six laughable fortuities.” (239) can only mean that he loves Tereza in his own definition of love as bizarre as that may sound. Moreover, Tomas does not believe in the idealistic world where everyone has a better half. The narrator promptly explained that “According to “Plato’s Symposium: People were hermaphrodites until God split them in two, and now all the halves wander the world over seeking one another.

Love is the longing for the half of ourselves we have lost” (238-239). However, Tomas admits that Tereza is most likely not the part of him he lost thus not his soul mate. Therefore, juxtaposing Plato’s Symposium’s definition of love and Tomas’ actions result in a clearer perspective of Tomas’ love for Tereza. In other words, Tomas loves Tereza in his own way. Furthermore, the personification of when “he feels her pain in his own heart.” (239) allows the readers to comprehend Tomas’ way of loving Tereza. If hurting her was not an option then love can be the only explanation. These reflexions made from the fifth part of the book “The Unbearable Lightness of Being” by Milan Kundera prove that Tomas truly loves Tereza. One might even argue that Tomas loves Tereza more than Tereza loves him even though he physically cheats on her. 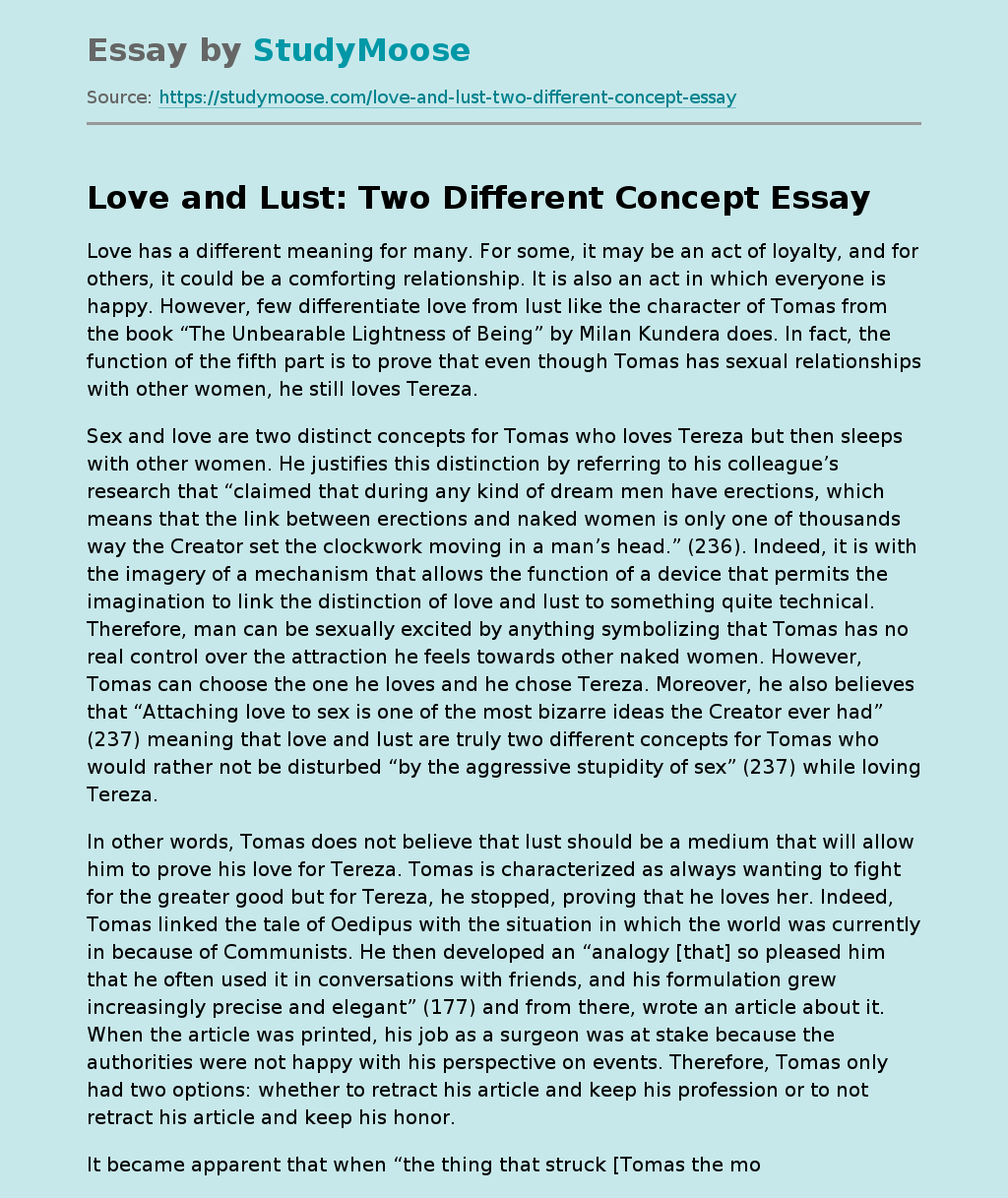