The relationship between Humbert Humbert and Lolita, is highly undefined. Many readers who have read Lolita find it to be based on “lust”, while others find Humbert to truly be in “love” with his Lolita. However, there is evidence that Humbert’s desire for Lolita is based on some obsessive-compulsive behavior which he cannot control, and therefore keeps returning for her. Humbert’s obsessions can be clearly recognized in his behaviors when looked upon in H. R. Beech’s Obsessional States and Andrew Brink’s Obsession and Culture: A Study of Sexual Obsession in Modern Fiction’s perception of what obsession is.

Don't use plagiarized sources. Get your custom essay on
“ Love or Lust in Vladymir Nabokov’s Novel Lolita ”
Get custom paper
NEW! smart matching with writer

Humbert’s obsessional tendencies are displayed in many passages through his descriptive word choices and his over bearing personality, such as when he describes Lolita after returning from camp to be, “…all rose and honey, ressed in her brightest gingham, with a pattern of little red apples,…with scratches like tiny dotted lines of coagulated rubies, and the ribbed cuffs of her white socks were turned down.

Obsession can be a difficult subject because there is not a finite definition of what obsession really is. Who determines what obsession is? When does deep admiration pass and obsession begin? According to S. Jack Rachman “an obsession is an intrusive, repetitive thought, image, or impulse that is unacceptable or unwanted and gives rise to subjective resistance” (2). Furthermore, Andrew Brink states that “…the popular meaning of the term obsession, including the new verb ‘to obsess,’ which means to be persistently preoccupied about something, usually in an unsatisfactory relationship” (195).

These similar definitions are important when looking at Humbert’s actions because his actions are perceived by these qualities.

First, Brink argues that most people have an obsessional defense, and this defense is brought out of men due to their fear of women. More specifically, this defense mechanism is explained as the “internalization of bipolar impulses to both accept and reject the same attachment object…” (195). He further describes it as “…a defense in which the internalized mother is split into accepting and rejecting aspects by which the person gains quasi-independence from her by identifying with her.” (Nabokov, 112) This conception is demonstrated in Humbert’s relationship with Charolette Haze. By Humbert describing Charlotte upon there first meeting with “the poor lady in her middle thirties, she had a shiny forehead, plucked eyebrows and quite simple…” (Nabokov, 37)

Furthermore, Humbert states, “Had Charlotte been Valaria, I would have known how to handle the situation by merely twisting fat Valechka’s brittle wrist but anything of the sort in regard to Charlotte was unthinkable” (83) as a way of letting the reader understand his sense of fear, his lack of control, and his desperation to regain his feeling of control. In hopes of regaining his lost sense of control Humbert plots to kill Charlotte; with out her in his way Lolita would be his, and he would have full control over her. However, Humbert never went through with his scheme for the mere reason, “poets never kill” (Nabokov, 88) In accordance to Brink’s definition of obsession, Humbert seems to fall elusively into obsessional defense in the sense that obsessive men’s fear of women also manifests itself as control (196)

Humbert’s tendency to be controlling throughout the novel leads the reader to believe he is obsessive. Throughout the novel Humbert remains in control most of the time, not only in control of the characters, but also in control of the readers. For example, Humbert tries to control the reader by making them believe his side of the story to be true: “Frigid gentlewomen of the jury!…I am going to tell you something very strange: it was she who seduced me” (Nabokov, 132). Humbert also tries to influence the therapists, stating, “I discovered there was an endless source of robust enjoyment in trifling with psychiatrists: cunningly leading them on; never letting them see that you know all the tricks of the trade; inventing for all them elaborate dreams,…teasing them with fake “primal scenes”…” (34).

Brink, commenting on this scene stated “the sadistic, controlling intent of this statement of knowing better than the therapist is typical of obsessional patients…” (102). Humbert has this need to feel he is in complete control. When the control is lost, a desire to retain his sense of dominance can overcome him. This is best presented to the reader as Humbert kills Quilty near the end of the novel. Although previously not taking the opportunity to kill Charlotte, Humbert has already lost his control over Lolita, his love, and therefore finds killing Quilty as a way of having some sort of control recuperated. Walking through Quilty’s house, previous to murdering him, Humbert locked as many doors as he could, controlling where Quilty could retreat to. (Nabokov, 294) However, after the murder, while swerving back and forth along the road, Humbert is stopped by the police, and at that point gives up full control for insanity. (306-307) And therefore, upon losing control it is discovered Humbert truly is obsessive.

Humbert’s obsessiveness is also conveyed through the words he uses, and the descriptions he gives; his language conveys obsession. For instance, after Humbert’s first sexual encounter with Lolita he describes her as “brown, naked, frail Lo, her narrow white buttocks to me, her sulky face to a door mirror, stood arms a akimbo, feet (in new slippers with pussy-fur tops) wide apart…”(Nabokov, 137-138). By remembering such detail while in jail years after the incident it seems quite clear that Humbert had an obsessive nature. This is also conveyed when he describes Lolita as “naked, except for one sock and her charm bracelet, a velvet hair ribbon was still clutched in her hand; her honey-brown body, with the white negative image of a rudimentary swimsuit patterned against her tan” (125).

Lolita is a very complicated novel to analyze due to the many interpretations made by different individuals. However, it is apparent that Humbert was suffering from some sort of obsessive disorder. It is apparent merely in what Humbert talks about and how he says it. There are few instances in the novel where Humbert is not speaking about Lolita or fascinating about having absolute domination over nymphets. 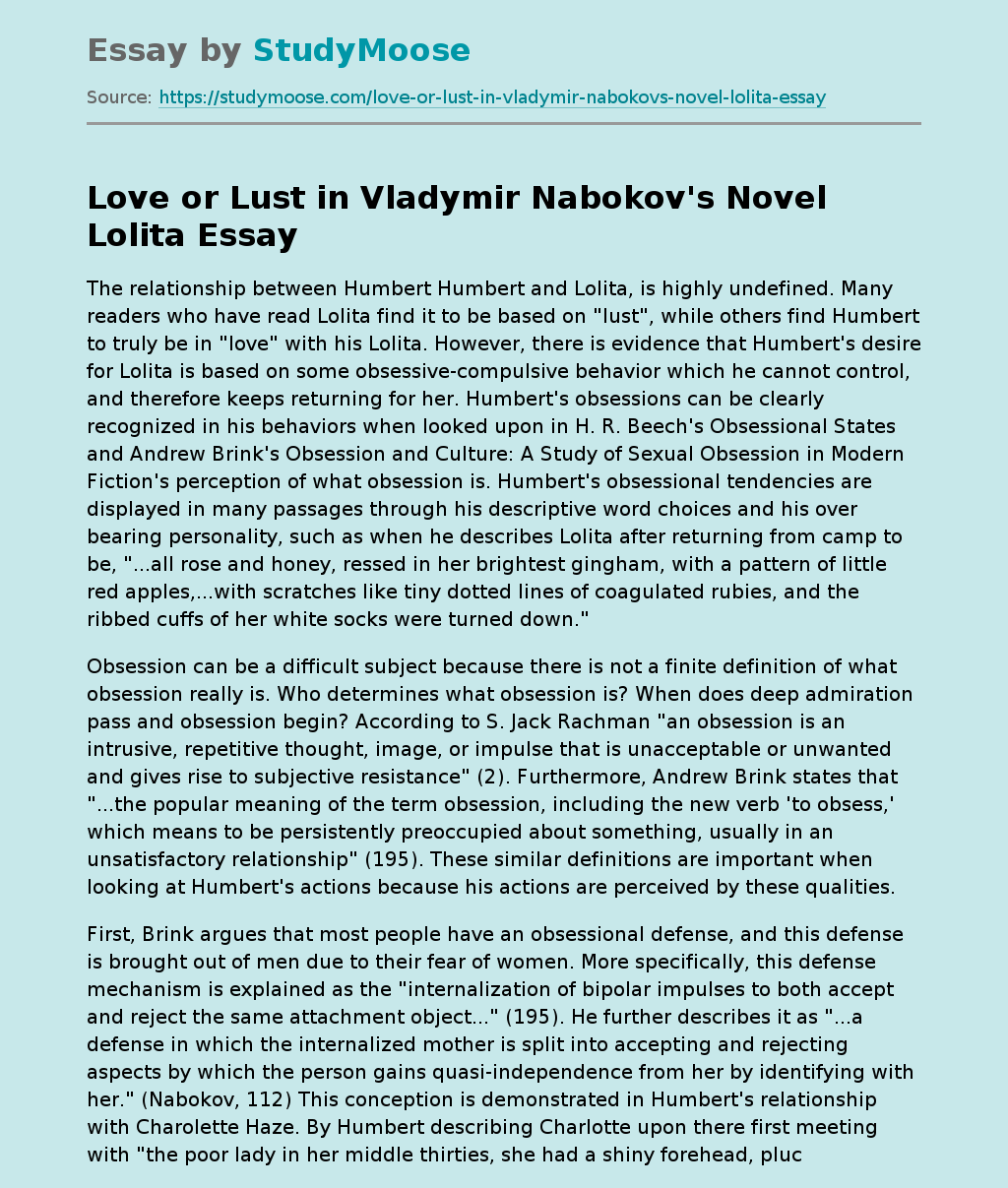